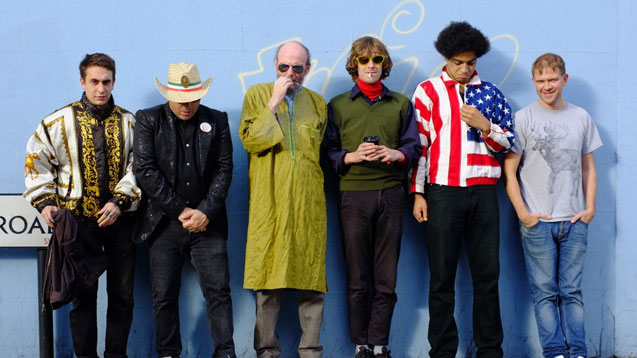 'Our old shows were pretty crazy and we’d be fighting or vomiting... Things are different now... We don't want to seem like assholes!' Funked-up post-punks Warmduscher on mastering the stage...

Every now and then, a band swerves into view sticking two fingers up at the sonic humdrum - and it's like a shot in the arm for music.

Funked-up post-punk outfit Warmduscher did just that three years ago, when they staggered out of Brixton’s grimy backstreet drinking establishments with bags of swagger.

Veering from improv guns-for-hire at south London house parties to a tight, roof-raising live band, theirs has been a charismatic rise.

The band is loosely stitched together from members of Childhood, Fat White Family and Paranoid London, and includes Saul Adamczewski, Clams Baker (aka Mutado Pintado), Lightnin' Jack Everett, Ben Lovecraft and The Witherer.

Over two albums, they’ve been responsible for some gloriously ragged rhetoric and synth-swamped krautrock, all served up with lashings of bon viveur.

With their second longplayer, Whale City (out last month via The Leaf Label), still riding high – and folks like Irvine Welsh pledging their love – we catch up with Clams to find out how it’s all going down in the Warmduscher camp…

We started out as a way of having fun – we were mostly improvised. We got a really good vibe from that and it was a nice break from the normal stuff we were all doing in other bands. There were no strings attached to this. We could do whatever we wanted.

Then we added Ben, who played bass. We all have different music tastes, but also the same. But they’re all really good musicians and we just gelled together. I’m not entirely sure why it works – but I’m glad it does!

How has Warmduscher evolved since the early days?

The first album was 100 percent improvised when we recorded it. Ben wasn’t in the band then, it was just Saul, Jack and myself. So that was how we did it, and we just left things as they were. Then [producer] Dan Carey saw us play at Mica Levi’s going away party at her house. It was really good, and Dan was into it. We asked if he wanted to do our next album and when he said ‘yes’, we thought ‘oh, shoot!’ We better get something together.

How did Whale City come about then?

Well, most of it was still improvised but we had been doing some of the songs in our live sets already – although we don’t play that often.

We had a basic idea for a few of the songs and at that point Saul was still in the band, but he was missing in action whenever we tried to rehearse, so it was just Ben, Jack and I. We only had three days to do the album. We just had to go in and do it. It’s not completely improvised – and doesn’t sound like it at all – but it kind of is. I had written all the lyrics along the way and plugged them in to the songs. The way that Dan approached it was to do the first side of the album on the first day, the second side on the second day and on the third day we did punch-ins, overdubs and backing vocals.

Everything was recorded to tape so if we messed up on one song in the middle of it, we had to go back and do it all over again. It’s actually a live album, which is kind of funny. A lot of people don’t believe it but that’s how it was done. We were all in a room together and it was all really fun. I’ve Got Friends was made up on the spot.

Did Dan pull out all the stops for the recording session? Did he get the lasers out?

Yeh, he did a little bit - he got the lasers out. But I think the crazy thing he did was come up with the recording process that I’ve just described. Doing it all in three days to tape – we just had to keep going until it was right. Funnily enough we only did two or three takes, which is weird!

Dan’s amazing. His process was so quirky and great. He’d never recorded that way before either. He took the Speedy Wunderground ethos and did a whole album with it.

What’s changed for the band since your debut album Khaki Tears?

We’re taking it a little bit more seriously now I guess, but the thing that’s changed the most is that we actually have a live set. We’re essentially a live band, we’re playing so many shows right now. We never did before. We’re really tight now! With this album, people expect to hear the songs live, because of the radio plays we’ve been getting and everything else. But with Khaki Tears, it was a soft-release album so we could do whatever we wanted live. Sometimes I miss the old way of doing things but we’re getting to the point now that we’re adding new songs like the old days.

Do you feel pressure from people knowing you and expecting a certain thing from you now?

Not really. We’re really grateful for people coming to see us. I don’t care personally what happens in terms of the live set - but I do care personally about giving a good live show. Some of the old sets were pretty crazy and we’d be fighting or vomiting or improvising… I remember getting into fights with the crowd, someone throwing a chair at me… It’s not like that now but I like to combine a little of the old stuff. We don’t want to look like assholes to the people coming to see us.

What’s it been like to get all the praise for Whale City?

To be honest, I haven’t seen it! The radio thing has been very good. We just did a live session for Lauren Laverne’s Recommended – she picked us – which is really cool. It seems that this record has been a slow process in terms of people catching on to it.

I love the album, so I don’t really mind either way. I’m really happy with it, so if one person heard it or a million people do, I’m still going to cherish that one for what it is.

We’re still trying to figure out ways to get to the US, so we’ll see how that goes.

What’s next for Big Wilma?

Hahaha, she’s definitely still doing it! We’re working on more stuff and hope to record another album before the end of the year. We have some songs. That’s the goal, anyway. Dan wants to do the next record – he’s so good at what he does. So, we’re keeping on doing it and moving on forward. It’s been really run doing big festivals and we’ve got more lined up live-wise.

What, for you, makes a really good record?

I like anything with a lot of passion to it. I’m not genre-specific. If someone is giving 100 percent, you can feel it. I’m into old soul or hip-hop or hardcore, and even some of the new noise bands coming up. As long as people are really giving it some, that’s my thing, I don’t care what it is.

I’m listening to a lot of hip-hop, and also a lot of older stuff. You know Ho99o9? I’m into them. I’m also into Full of Hell, which is noise but a bit electronic-y. I like PREGOBLIN, I’m listening to a lot of John Maus. I got to meet him and totally fan-boyed him! I like Micachu’s band Good Sad Happy Bad, I love Meatraffle. Fat White Family’s new album is coming out and it’s going to be great. Also Uniform, and my friend’s band Pet Brick.