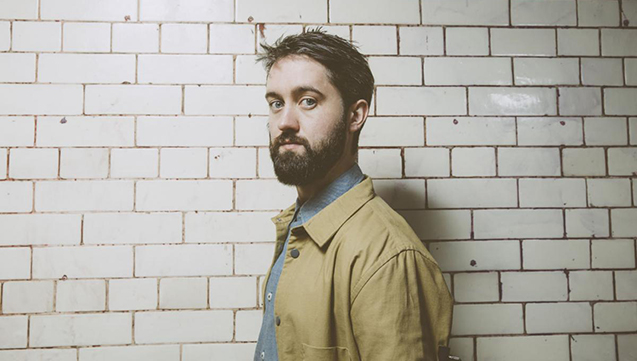 'I’m making a record right now which I want people to dance to' - Villagers, the acoustic master of sadness and sorrow, tells us why he's stepping out into the light for his latest enterprise...

Dublin singer songwriter Villagers (aka Conor O'Brien) has been pushing the boundaries of sorrowful folk since his debut album Becoming a Jackal back in 2010.

Over the years he's laced his startling songwriting and candid lyrics with grand orchestral refrains and electronics, while live, he gathers a full band to reinterpret his sound.

The template has culminated in a number of successes, including several Mercury Prize nods and the Best Song Musically and Lyrically gong at the 2011 Ivor Novello Awards for his track also titled Becoming a Jackal.

Now with his starker, surer third album Darling Arithmetic out in the world, Conor is up for another Ivor, this time in the Best Album category.

We caught up with him at The Ivors nominations launch yesterday (19 April) to hear about his brave new direction (‘I want to make people dance’), his love of Caribou and outré electronics, and his fail safe songwriting methods…

How does it feel to be nominated for an Ivor Novello Award again?
I feel happy and honoured.

Is it even better to be nominated for a full album rather than one song?
Yes, I spent a long time making this into a cohesive piece of work. I put the most time into making it all work together from start to finish. I was trying to tame my tendency to bring songs into bizarre places, which I’ve done in the past. This time I wanted there to be one main groove and feeling, so there’s a lot of space for the words to sing through.

How easy was it to do in practice?
It was going against some of my natural tendencies but I learned how to edit and when it was right and wrong to edit – which was an interesting thing to play with when writing.

Where did you write it?
In the house I live in, an old farmhouse in Ireland. I wrote it in the old stables loft area where they used to store the hay. I had a 16-track and a few microphones and I sent seven or eight months up there. Whenever I wasn’t touring I’d go up there and record. I had the freedom to go up there whenever I wanted, which was great. One of the songs was recorded at four in the morning, when it came into my head and was ready. So it was all quite organic.

Are you always writing or do you like to carve out specific time for the purpose of putting together an album?
A lot of the time I feel like I’m working on stuff that was written a few years ago. I’m always collating ideas which I can’t remember doing half the time. They might be on my phone, in a notebook, on the computer… A lot of it is about gathering all this together and realising a pattern, which is probably from your subconscious somewhere. That begins to form the backbone of an album and then I filter the ideas that appeal to me.

Do you ever find yourself writing a song that you couldn’t imagine singing?
Yes, I’ve got a couple of them! Maybe I should give them to someone? A lot of the time they’re happier songs (laughs) – which I couldn’t possibly sing myself!

Can you imagine ever being in a headspace where you would make a happy album?
Oh my god (laughs)! Actually, I’m making a record right now which I want people to dance to. There’s a lot of grooves in it and very propulsive rhythms, but if you listen closely the lyrics are really depressing (laughs). But I like that, you know? Sadness has so much more depth to it when you’re trying to write – you can use your whole being. When you’re desperate you’re whole body is working towards something but when you’re happy you’re just busy being happy.

What aspect of music-making do you like best – writing, recording, playing live, or something else?
I like the stage I’m at right now with my new stuff. I’m at a crossroads and it feels like there are a million directions I could go in. Literally yesterday I decided to start creeping down one path. I’m starting to like that path, and that’s really enjoyable. I feel animated when I’m on this buzz of creativity. And when I’m stuck, my friends and family can see.

So I guess the best bit for me is the beginning stage – it animates your whole life. I’ll probably say the same thing in about six months when it’s all ready to be released. I feel quite blessed to be a musician in this day and age.

Would you be interested in working with an outside producer?
Yes, potentially. I’ve been learning about all of that stuff myself recently, so I want to see how far I can go with it. I’m really into production and mixing at the moment. But maybe down the line…

Who would you like to work with?
Production-wise, maybe someone like [Portishead’s] Adrian Utley, he’s one of my favourites. I think he did the Perfume Genius album and I love his textures and synths and stuff. Who else? Bjork (laughs)…

Would you be interested in producing other people?
Definitely, it’s a road I maybe want to go down. I do it already for friends whenever I’m free in Dublin. Not as a job, but just to learn. It’s probably where I’m going to be most comfortable in the future.

Do you ever listen to songs and wish you’d written them?
Yep all the time. Then I go off and write it yourself!

When was the last time that happened?
Every song I’ve ever written basically (laughs). I think a song I’m working on now is directly influenced by a Caribou song on [his 2010 album] Swim. But that’s the beauty of sample-based and electronic music – you’re just part of a continuing evolution. You’re unique but still part of the stream.

Skepta, Wolf Alice, James Bay and Jamie xx are also among the nominees lined up for the Ivor Novello Awards 2016. BASCA, in association with PRS for Music, will present the awards on Thursday 19 May at the Grosvenor House, Park Lane, London.
Features
Back to top