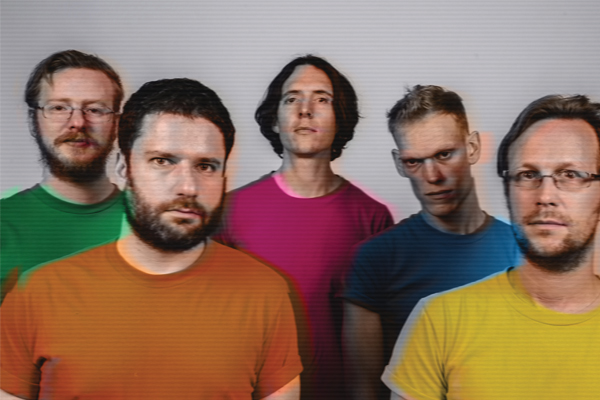 Leeds band Vessels are a group making music somewhere in the sonic vortex between electronica and post-rock.

Taking their pointers from everything from techno producer James Holden to the likes of Mogwai and Explosions in the Sky, over the last ten years the outfit have steadily assumed more beats and bleeps into their music. Their latest record distils the best bits of their wide ranging influences into a cohesive whole that will move your head as much as your feet.

Was there a first song or moment which got you into music?

Tom - For me it was all about the Beatles and the Beach Boys as a kid, and then the holy trinity of Hendrix, Nirvana and Rage Against the Machine as a teenager.

Tim - I think the Beach Boys might be the first thing I remember listening to a lot on my Walkman. After that my most vivid memories as a teenager are hearing Highway to Hell, Dark Side of the Moon and Master of Puppets.

How did Vessels first get together?

Tim - We became Vessels in 2005 after a number of years playing together in a post-hardcore band. We realised during that period that we wanted to be making interesting and dynamic instrumental rock music. At the time we were listening to bands such as Mogwai, Explosions in the Sky and the Appleseed Cast among many others. Gradually our passion for electronic music has creeped into the Vessels sound.

When did you realise that you were really onto something with the group?

Tom - I don't think we would have lasted 10 years if we didn't think that what we were doing was worthwhile, but it's hopefully been getting incrementally better over time. We were certainly guilty of making some pretty bad music when we started out! By the time we formed Vessels we'd turned up our shit-filters high enough so that now we're not too embarrassed by our back catalogue.

Tim - I think when John Congleton agreed to produce our first album (after a random speculative email) after hearing a couple of our self-recorded tracks. It felt like an endorsement by someone we really respected, and who had been involved in some of our/my favourite post-rock albums. We all saved as much as we could to raise the cash for recording the album with John in the US (and it gave me the impetus to quit my job!).

Many bands try to inform their music with electronics but none do it so well as you - was it always a natural fit for you to marry guitars with beats?

Tim - Electronica, and to a lesser extent techno, has always been a constant in terms of shared musical interests. Some of us may be more into Americana, indie, folk or jazz, and some more into particular branches of metal and world music. Some of this would inform the writing for the earlier Vessels stuff, but from almost day one we have been experimenting in various ways with laptops, synthesisers and electronic beats with varying degrees of success. Lee has always written electronic music alongside the work with Vessels, but as a band collectively incorporating the electronica elements into our sound has been a process of trial and error.

How does the creative process work with the band?

Tom - Usually me and Lee are tinkering about with some ideas, then we flesh them out into demos, which we show to the other guys for opinions on which tunes work, which tunes we're all into and are worth pursuing and which bits to trash, then the fine tuning comes when we start playing them live together. It's important that everybody thinks it's good, because if all five of us agree on it then hopefully there's a kernel of truth there. Plus, nobody wants to be grimacing their way through a section that they think sucks during a gig.

Your latest album Dilate has been four years in the making – what were you hoping to achieve with the record?

Tim - With Dilate we are hoping to have cemented what has been a long process of evolution from a mostly rock-based instrumental band dabbling in electronics to a fully electro and dance-orientated instrumental band. Some of the same reference points are still there but the goalposts have definitely shifted. We hope to not have alienated any of our old fans and at the same time to attract another musical demographic, one just as at home in a club as at a concert venue - as we ourselves are.

How has the creative process evolved since you first started out? How is this latest record different to your previous releases?

Tim - Initially we operated a very democratic songwriting process by spending days locked in a basement and thrashing out ideas together by jamming. This period cemented our abilities to play together as a group of musicians but could be very frustrating creatively. The first two records were recorded pretty much live in the studio over a couple of weeks with various layers of overdubs, and then mixed. This was not the case with Dilate which took shape over a much longer period of time and in different places. Now that Lee and Tom take the lead on songwriting there is a better narrative coherence to the tracks and less cooks to spoil the broth. We do however all have input on the final track through playing it as a band and that process is enjoyable, seeing what is transferable from a demo/computer to a musician playing live.

Which artists do you look to for musical inspiration?

What does the future look like for the group?

Tom - We've just sifted through 100 new demos and whittled them down to 15 or so for potentials for the next batch. Hopefully it will be less than four years before the next record this time!

Dilate is out now. Visit the band’s website to find out more.