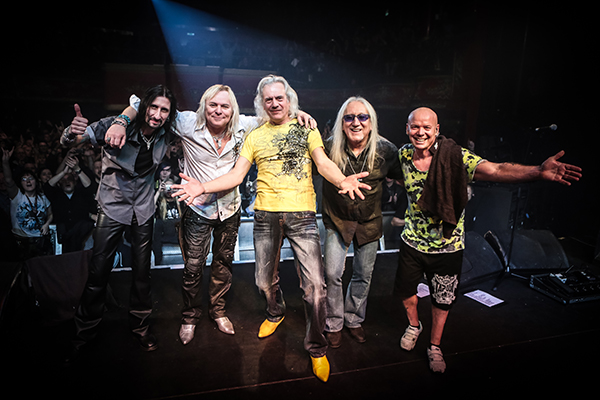 'We can laugh, cry, scream and shout at each other, but nothing comes in the way of our friendship' - Amanda Gentle discovers the secret behind the ongoing success of seminal rockers Uriah Heep…

Since their inception in the late sixties, Uriah Heep, alongside the likes of Black Sabbath and Deep Purple, have been one of the UK’s most enduring and successful rock outfits.

Taking their name of the group from a Charles Dickens character at the very genesis of British rock and roll, the band have been through pretty much all a group can go through in its life time. Success, fall outs, personnel changes, huge gigs and 24 albums (including 2014’s Outsider) but despite everything that the music biz has thrown at them, the band continue to release records and head out on huge tours.

Did you have a vision of what you wanted to create at the start with Spice back in 1967?

Mick Box (MB): We called ourselves Spice because we wanted our music to have more than one style or flavour.

We were initially a four piece - guitars, bass, drums and a vocalist - but when we heard our original songs coming out of the speakers I felt we needed another colour. I was a big Vanilla Fudge fan and they used a Hammond Organ. The versatility of the instrument really fit our dynamics at the time. We adopted the instrument and added another member - it changed our musical template, so we decided to change the name of the band to Uriah Heap.

What was it like paying your first big venue?

MB: It was amazing. I drove to the Marquee with David Byron (our then vocalist) in his father’s Ford Cortina. When we arrived we saw a queue that stretched right around the block. Seeing this I phoned our agent to tell him we thought that we may have had the wrong night. He congratulated us and said the ticket sales had gone through the roof.

What made your writing relationship with David Byron and Ken Hensley (original keyboardist) so productive?

MB: The only way I can describe it is chemistry. We all seemed to be on the same musical page. The ideas came in a never ending flow.

What is it about the current line up that ensures you have such a strong bond?

Phil Lanzon (PL): Mick and I take care of the writing mostly having lost Trevor Bolder (bass). We know each other’s writing abilities and we get on really well with that. We are not in each other’s pockets either. We don’t live near each other and we don’t socialise unless we are together on the road. Then when we are together we know what each other wants and what we want to aim for.

1972’s Demons and Wizards is one of your most successful records - what made everything fall into place for you?

MB: It was the first time that the cover and audio were married together perfectly. We’d also found a very magical and mystical way of writing lyrics that captured everyone’s imagination. There were some great songs on there too - Easy Livin’ really took us to the world stage.

Wonderworld (1974) was as difficult time period for you all - what was the most challenging aspect for you?

MB: We recorded this in Munich and weren’t a band comfortable recording away from England. In those days we were on the road constantly so being away from home to record too did not sit very well. The excesses that had come in to play on our tours continued in the studio as we were still away.

What do you think has contributed to your long-term success?

MB: We have been lucky enough to have had a lot of songs that have stood the test of time and people still love to hear played live.

PL: As part of a band you have many different characters. You have to pull together and if you have a common belief in what you are doing, then you have a fair chance. You get the knocks continually and not many will survive but you have to see yourself as the one that will pull through.

What positive advice would you give to bands who go through conflict?

MB: Any professional disagreements are normal, but only as long as they are constructive and not destructive. Once over, they must be put to one side. If you don’t, then nothing will last very long.

PL: We’ve got a definite way of thinking and the band is the overriding factor. Occasionally you do need to discuss things and you have to be on the ball with business and reach an agreement. If there’s any sign of anyone going off at a tangent you have to nip it in the bud.

What has been the most rewarding aspect of working with Phil, Bernie and the current crew?

MB: We really are our family away from our family. We have a very creative energy that falls under that heading of that word chemistry again. We can laugh, cry, scream and shout at each other, but nothing comes in the way of our friendship and respect for each other as musicians. The first thing we pack when we go on tour is our sense of humour.

What would be your advice for artists starting out today?

MB: Apart from the obvious clichés around practising, you need to try and be an individual, and find something that makes you stand out.

When we started I didn’t play guitar like Ritchie Blackmore, Ritchie did not play like Jimmy Page, and Jimmy did not play like Tony Iommi. We all had our own individual styles and this went for all the band’s members. It was the sum of those parts that gave groups like ourselves, Black Sabbath and Led Zeppelin their own unique sound. Musicians now tend to go to rock schools and end up all playing brilliantly, but you can’t tell one from the other.

PL: New writers and composers must have an absolute passion and commitment for what they are doing. That’s number one. Secondly whatever genre you’re working in, you need to know it like the back of your hand. Then there’s the songwriting knowledge, how they are constructed coupled with being able to get it across live. You also have to look the part. I’m afraid to say but image and the way you look is going to play a big part.

What would you say has been the most challenging aspect of the career?

PL: We are live touring band who are continually working and play a lot of summer festivals. The biggest challenge is to come up with a new album every few years. When we get to the point of saying we now need new material I get together with Mick and we sit down with our ideas and talk through the whole thing. That’s our challenge; to make another strong rock album. Most musicians would agree that to write a good rock song is not the easiest thing to do.

We look at Heep’s history, what we have done before to the present day and cherry pick ideas from that. There are three core elements; melodic strength, interest in the lyric and a good feel and passion for the song.

What would your final inspirational message be for new PRS for Music members?

PL: If you’re interested in being a working musician you have to have very strong shoulders, be very tough, be prepared for the knocks as they will come. If your passion and determination are great enough that’s all you need.

uriah-heep.com
Features
Back to top