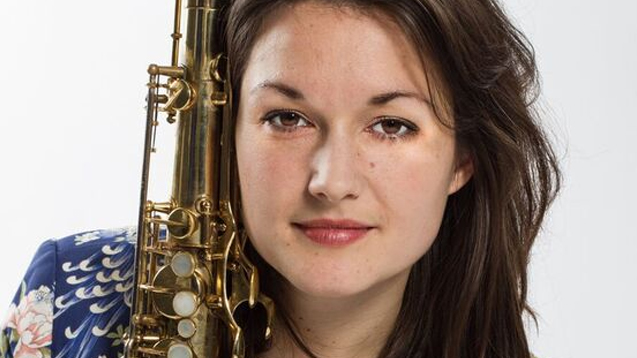 We catch up with jazz saxophonist Trish Clowes to find out more about her, her music and upcoming gig at the London Jazz Festival...

Saxophonist Trish Clowes has been weaving a deft musical path through the world of jazz and beyond over the course of numerous events, records and live performances.

Now gearing up to release her fourth record, My Iris, Trish will be showcasing the album as part of a free, PRS for Music-sponsored gig at the 2016 EFG London Jazz Festival.

She’s on a bill at this year’s event alongside the likes of Jacob Collier, Norma Winstone and the Mercury Prize nominated act, The Comet is Coming.

We caught up with Trish to find out more about her, her music and upcoming gig…

I’m just finishing the mixing/mastering of my fourth album, which will be coming out on Basho Records in January - I've been recording with my new band My Iris over the summer. Our gig at the EFG London Jazz Festival will be a preview of the album and the first appearance of the band as a quartet in London.

Other recent activities include working with Brit-jazz legend/pianist Gareth Williams and plotting future activities for my new music project Emulsion. I like to be pretty uncompromising with the artistic content of Emulsion so it takes a lot of planning to get projects off the ground, but there will be announcements about 2017 events very soon...

What does this new record mean to you?

This is the first album I’ve done with just small band (with Ross Stanley - piano/hammond organ, Chris Montague - guitar, James Maddren - drums). It’s been a really special recording, and a nice change not having so many musicians to juggle! We’ve been developing the music since 2013 as a trio, adding James to the mix this year, so we've been building up the repertoire and the improvising language between us for a while. I think the record has quite a different sound to my previous releases... and I've been listening to a lot of live Weather Report this year so I think some of that has rubbed off on me! I use a few pedals/effects and, along with the range of sounds I can get from the other players and instruments in the band, there are so many colours and textures at my disposal. Myself and the engineer Curtis Schwartz have really enjoyed the mixing process as a result.

So you must be excited about the performance at the jazz festival?

Yes, really looking forward to sharing the music with everyone - it’s going to be a good one. Doing a free stage event as part of a big festival means more people will be able to hear us, in particular people that wouldn't normally go to one of my gigs, or a jazz gig. Of course I love performing in jazz clubs and concert halls but the energy you get from the audience in open-space performances is really special too.

What are your thoughts on the health of UK jazz?

I think the UK has some great opportunities for aspiring jazz artists. It's not perfect but compared to other parts of the world I think we're doing okay. Most young artists are pretty savvy these days (thanks to lots of great schemes, music college education). Also, in the UK players tend to leave college in their early twenties, getting out into the real world to play, and earning experience straight away. In Europe/US people seem to stay in institutions longer, delaying this process. Where the UK could do better is nurturing established artists in the mid-latter stages of their careers - a time that, as a jazz musician, is usually your prime.

It depends where you are - provincial jazz clubs tend to have more stereotypical audiences (generally older generations, and generally men, although this is changing...) But then you go to other types of venues and it can be totally different. There is a big jazz audience out there (I just played at Scarborough Jazz Festival and the energy from the audience was fantastic) but like all the arts, there's so much 'content' out there these days. People in general are over-saturated and don't consume music in the same way as they did 20 years ago - as artists, we have to get on board with that and adjust! Jazz is just such a special music though - musicians put so much time into their craft... but it takes a little more time to digest as a listener, mostly because it's new music every time we play; every solo is different, the main melodies are always played differently, there's less for the listener to recognise instantly. But we are worth the effort I think!

How important has PRS for Music been for your career?

PRS for Music payments are always nice to receive - they make up a decent part of my income as I’m sure is the case for many artists. In conjunction with album sales, it makes putting out records financially viable. As a jazzer releasing records featuring my own music I can make money from composer royalties from radio play etc.

The Foundation have supported me well over the years, not only in my own projects (Emulsion, my new record, touring, commissions) but also through artist schemes run by other organisations. The Foundation are a massive part of what enables and facilitates new music in the UK and they are therefore a very important organisation.

trishclowes.com
Features
Back to top