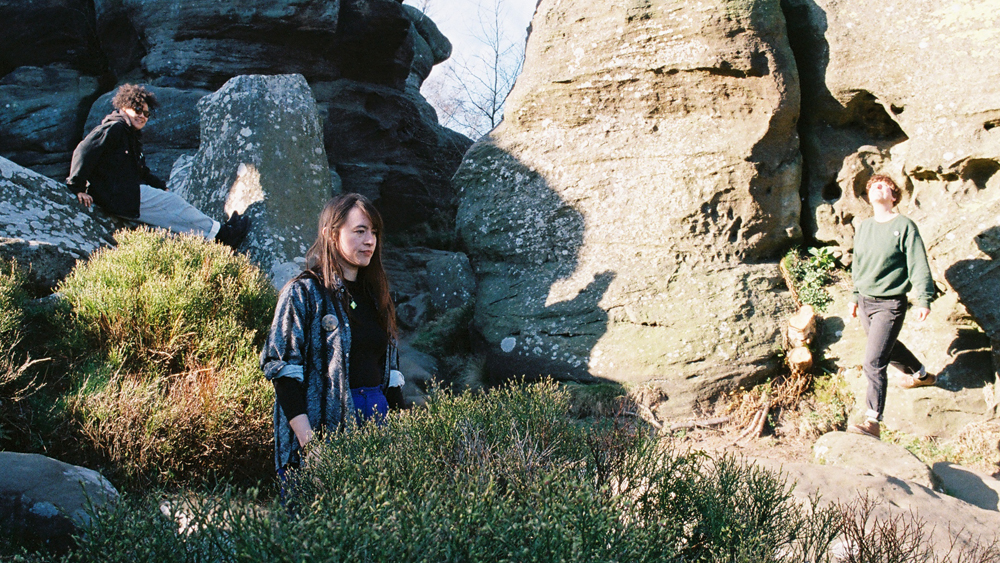 ‘It’s a bold move to try and get a room of people to shut up and listen to you,’ says Trash Kit’s Rachel Aggs.

‘It’s a bold move to try and get a room of people to shut up and listen to you,’ says Trash Kit’s Rachel Aggs.

Nevertheless, it’s a feat she has mastered with several bands, from the post-punk dance music of Shopping through Sacred Paws' afrobeat and indie-pop hybrid.

And Aggs’ multiple project approach is one she shares with her fellow members of Trash Kit.

Having met at university, Aggs and Rachel Horwood formed Trash Kit in 2009 with Electrelane’s Ros Murray.

Much like Aggs, Horwood kept herself busy in between Trash Kit records as a member of both Bamboo and Bas Jan.

But it was in the three-piece Halo Halo that she met Gill Partington, who would eventually replace Ros on bass in Trash Kit.

Given all the band’s restless extracurricular activities, it’s hardly surprising that the last Trash Kit record was released back in 2014.

Yet, somehow, they’ve found the time to write and record their third album, Horizon, and the frenzied sketches of their debut have given way to fuller offerings.

Although the record still sparkles with Aggs’ signature guitar rhythms and Horwood’s restive percussion, as the title suggests, Trash Kit’s purview has expanded.

Here we chat to the trio about band dynamics, the genesis of their latest album and how they juggle all their respective projects…

What’s the thinking behind your latest record, Horizon?
Rachel Aggs (RA): I’d say it was very natural. We weren’t even talking about specifically recording another album we were just writing songs in order to play them [laughs]. Because Gill joined, out new member, we wanted to write songs with her instead of her having to learn old songs, so it would be more fun. I don’t think we discussed it as an album until we’d actually recorded it.

Gill Partington (GP): ‘I’m not sure there was any thinking behind it because we didn’t know we were doing it until we were half-way through it. We took, probably, four years to write the songs. It was a long time. It’s not like we decided to write an album, it came together very gradually.

How do you juggle Trash Kit with all your other respective projects?
Rachel Horwood (RH): I don’t know how we juggle; we just manage to do it. We kind of fit Trash Kit around everything else we do I suppose. I live in London, Rachel Aggs lives in Glasgow and Gill lives in Cambridge, so it’s kind of limited to how much we can do, so I guess that’s why it took us so long to write the album as well. We manage, basically, because we enjoy doing it. We enjoy playing music together.

What was the process of writing and recording like?
RA: I wouldn’t even call it writing an album to be honest, we were just writing songs and then we like, “oh, we should record them.” When we finally got into the studio it was really fun. I think maybe because we had been playing all of the songs for quite a while, they felt really lived in and even though we were still improvising in the studio, we were really comfortable playing together. Also, the studio where we recorded in, Total Refreshment Centre, is a really lovely place. It was generally a very nice, very positive experience.

GP: I don’t have anything to do with the lyrics, but I’m always impressed by the speed with which the Rachels come up with these things. Sometimes it’s a real spur of the moment thing.

RH: It was kind of quick, but at the same time we did our part in December 2017 and then we did overdubs at the end of last year in October. It took a long time for us to find the time to all be able to go back to the studio at the same time.

Given that Gill is a relatively new member, how did that change the dynamic of the band?
GP: I’m not sure it did. When we recorded this album I’d already been in the band for a few years and maybe thing shifted very gradually from me playing the existing songs to playing the new ones. That does feel more satisfying to me because they’re more my songs and I feel like I’m part of the sound. But I’m not sure it changed in a way that I recognised at the time, but very gradually.

RH: Me and Gill played in a band together before, from 2010 to 2013 or something, and we actually met Ros Murray who was our first bass player and Gill at the same time. We also played music with Gill, and while Roz and Gill are quite different bass players, I feel like there was also something musically that we connected in a similar way. It felt very natural when Roz couldn’t play in the band anymore to have Gill come and play with us.

Sonically, the songs on Horizon have a sunny disposition, but you broach some heavy themes; is it important to make a statement with your music?
RA: Yeah, definitely. I think it would be weird for us to not sing about things that we care about, or things that frustrate us or make us angry. To me, it’s just part of making music, of expressing your position in the world. I think, maybe on this album in particular, things are a bit more open or abstract, in terms of breaking down ideas musically and conceptually – although I feel a bit silly saying that. There’s not that many words on the album, we don’t use that many words. I think it’s important to us that there are other ways of expressing ideas, it’s sort of the point of doing music. You can make sounds and shapes and create spaces in different ways.

How do you think your sound has evolved since your debut?
RH: I feel like it’s evolved a lot. It’s kind of evolved with just us becoming better musicians. When we did our first record, me and Rachel (Aggs) had only been playing drums and guitar for, I don’t know, maybe two years at that point. When we first started the band, we were like complete novices, pretty much. We played other things, but I’d never played drums and Rachel had never played guitar. We’re maybe making the music that we always wanted to make now. Now we have the ability to create more what’s going on inside of our heads. We’ve also changed as people. When we made our first record, we were 20 – 21, we’re now in our early thirties.

RH: Well I would say that I can probably play a bit better now than I could then.

GP: Obviously I didn’t play on the first two albums, and I really like those albums, but I can really hear a change in the sense of ambition. The songs on the new album are more ambitious. They’re definitely longer. The songs on the first Trash Kit album they’re about 40 seconds long, and we have Horizon, which is like seven minutes, something like that, so something’s happened. They’ve got more ambitious but there’s also more atmosphere and more changes in them.

RH: I feel like maybe when we first started, we’d play something and then we’d get bored or we just wouldn’t feel like we had the confidence to develop those ideas into something more.

RA: We also have softer and quieter songs, and I think on the first record we were always feeling like to take up space we needed to be really loud. There’s a strange kind of confidence that comes with feeling like you don’t have to be loud all the time. It’s a bold move to try and get a room of people to shut up and listen to you.

How would you describe your music to the uninitiated?
GP: We get compared to The Slits, a lot, because that’s the only female punk band anyone can think of. It is a punk record, but it obviously doesn’t sound like The Slits. I think the fact that we can’t describe it is a good thing rather than just a sign that we are really inarticulate and can’t describe our own record. It’s doing something interesting and new that maybe we didn’t expect, so that can only be a good thing. It’s good, how about that?

What makes the band work?
RA: I think we’re good at listening to each other and nobody’s too precious about any ideas. We’re good at holding back and leaving space, but also knowing when it’s good to jump in with an idea.

How do feel about the UK’s independent music scene at the moment – are there any artists or labels you’re particularly excited about?
RA: Everybody on Upset the Rhythm, our label, is great. They’ve been putting out great things and been putting on great shows for years. So that’s a permanent fixture for us now, getting involved with them was really exciting. I live in Glasgow now and there’s lots of really good bands, Spinning Coin, Hairband – who are all members of the same band – and a band called Kaputt as well, with similar members. There’s also a really good band called Comfort. There’s always tonnes of great music.

RH: I don’t think we’ve got any gigs until September now.

GP: The whole point about this band is that we really don’t think too far ahead.