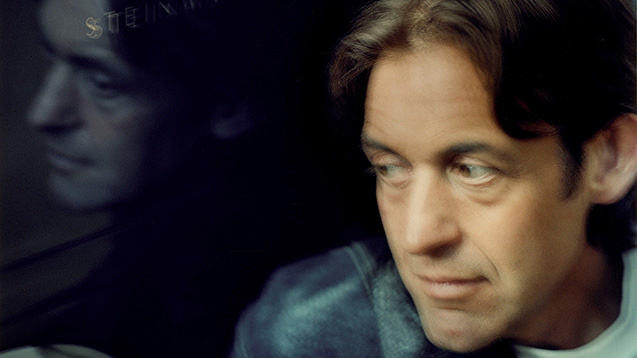 We sit down with composer-turned-author Tot Taylor to find out what inspired his debut novel and learn more about his varied musical career...

Composer-turned-author Tot Taylor is talking about a cab ride he took two years ago in LA – with none other than the godfather of soul's first drummer at the wheel.

It's just one of many fame-to-mundane encounters that he cites as inspiring his debut novel, The Story of John Nightly.

A fictional tale of the title character – tracing the career of a promising singer-songwriter in the late 1960s to 2006 – the book follows his rise and fall through a series of flashbacks, contrasting his creative peak and subsequent fade into obscurity.

Tot's own time in music has followed an altogether more ascending path. Signed to Island Records while still at school, his pop career wasn't to be, but he's carved a successful career in music as a composer, working on everything from plays at the National Theatre to films such as Kray twins thriller, Legend.

He's also co-director of Soho's Riflemaker gallery where he curates exhibitions including a program dedicated to feminist artists of the 1970s, alongside lecturing on art at Sothebys Institute.

We sat down with him to learn more about the novel and his varied musical career...

How did the inspiration for The Story of John Nightly come about?

It started about 25 years ago. I was on Fulham Palace Road waiting for a bus one day. A guy walked out from a building site, a typical builder covered in plaster and dust like a white zombie and stood behind me in the bus queue. I recognised him immediately as a very very well-known famous and important bass player from a new-wave post-punk band of the late seventies. This would be about five years after his period of fame. We're talking about a band with several Top Ten hits. Why was he now working on a building site?

Two years ago in LA  I got a cab and the driver had music playing. I was tapping my foot and he said, 'are you a drummer, man?' I said, ‘why, are you?’. He replied, 'yeah I was James Brown’s drummer'. Then, last year I had a very famous boyband member come to fix my heating! There have been so many encounters like this over the years. Specially gifted individuals reduced to doing menial work.

I wanted to write something based not on the 'success years', but that often very long, drawn-out period which follows. It’s the nature of fame in the music business, there must be literally thousands of ex-pop stars sweeping the roads, stacking shelves in Tesco, cleaning offices just in London alone.

The point is, what are these people going to be doing for the next 40 or 50 years of their lives? That ‘quiet time’ we never hear about? They generally don't make the much-vaunted ‘comeback'. So instead of writing about fame and success, why don't I set the story during that quiet time? The long fade out. Trying to relive your success, remake ‘another' big record. Trying to have a new big idea which you never actually will have. That's what the novel is about.

You were signed by Island Records as a schoolboy, can you tell us about that?

I was signed while I was taking my A-Levels. I was part of a ‘school band’. We had a day off school, came up up to London and walked into Island Records which was our favourite record label at the time because they had Jethro Tull, Roxy Music, Sparks, Free – people like Cat Stevens and John Martyn. All these wonderful bands and singers under one roof.

They offered our group A Special Moment a two-single deal. After quite a long time trying to get the recording right, Chris Blackwell, the legendary founder of Island, declared it to be  the 'worst record he'd ever heard'. They happily paid us the advance though! That was my first experience of the recording industry.

What happened after that?

I was planning to go to art school and came up with this idea of combining Performance Art, the sort of  ‘art mode’ with music. We would have a 'conceptual pop group'. Doing things that ‘a typical pop group’ would do but in an ironic way. With a Cambridge guitarist friend Simon Boswell, we called the band Advertising because we would be singing very short songs, almost like 'slogans’. The initial idea being 'Advert-I-Sing.' We went to EMI records, they offered £150,000 for an album, then immediately removed the ‘clever’ hyphens from the band’s name!

So my journey has been very different to John Nightly's. With me, it was a thing of everyone going, 'yeah this is going to be great - and big' and then it wasn't great - or ‘big’!

Advertising made an album which involved John Leckie and Joan Jett’s producer Kenny Laguna but then punk landed and anything to do with the idea of  'pop music' was sort of deleted. EMI put the album out though and it was big in Japan like a lot of things of the period but nothing really happened with it, so I began a career as songwriter-for-hire at the start of the eighties.

One day a session singer came to put a vocal on a demo we were making, and that was Mari Wilson – Miss Beehive. I wrote songs for her and Mari had two or three Top Ten records. Then I worked with Swedish singer Virna Lindt. That was a number Indie Chart hit and was also was ‘big in Japan’. Then I was offered a lot of work in film, so I moved to LA to try that, built a large studio, then went to work for the BBC as a composer and arranger.

What have you been up to since?

I was lucky in that I always had a lot of my music used for things - for sync. I was sending music to film producers and advertising agencies. I sent a ‘left-handed’ sounding track to John Pallant, the creative director at Saatchi & Saatchi and I got a phone call back from him. 'I'm working on a new thing called the National Lottery' he said. 'And I like this piece of music you sent me. I want to use it as the theme.' But I couldn't remember it at all and asked, 'are you sure it's my piece of music? I just don’t remember it. When did I send it?' He replied, ‘oh… about seven years ago…’  Well, they used that for about three years and that meant I’d kind of won the lottery before it was even launched!

You’ve worked on music for plays at the National Theatre – can you tell us about that?

The most fascinating project was the six hours of piano music I composed for an eight hour play about Pablo Picasso, in the NT’s Platforms series. The audience would see it over four evenings. We did it at the National and then at the Edinburgh Festival then toured it. It's coming back into London in 2018. There are eight actresses who speak directly to the audience about their life with Pablo. It's tragic, quite sad but also very, very funny as well. Again, a look at the quite solitary life of a visual and stupendously famous artist which has no doubt fed in to my novel. The play is called Picasso's Women.

You’re co-director of the Riflemaker art space in Soho – how do music and art entertwine for you?

We opened the gallery in 2003. The reason I did it was because originally I was trying for a career in art (in Cambridge), when I jumped on the train instead and went to see record companies. That stalled my plans and my chosen path. I had always had friends who were professional artists and I probably saw four to five exhibitions each week since schooldays. Still do.

I was interested particularly in feminist art which I thought had been very undervalued. I saw it as more like rock 'n' roll because it was trying to make social and political points. It wasn’t based on ideas of ‘beauty’. It was angry and it was forthright. Many of the important artists were still unknown to the wider public. That’s changed now and even ‘feminism’ as a word or ‘mode’ has become very much a fashion thing as well.

But I think the idea that art and music being able to easily coalesce is misguided. Painting and visual art by its nature is a solo experience. It leads to isolation. Months – or years – working on one painting. Music, on the other hand, is essentially collaborative. That’s why we have groups and orchestras. I think there have been very few successful collaborations between the two. Literature and the visual arts are perhaps a better fit.

You're donating some proceeds of the novel to the Benevolent Fund which offers PRS for Members financial support and advice in times of need. Why is that important to you?

It was always in my mind when I started writing what became this very 'long, involved' story. I would read the articles in M magazine about how people I had great respect for as songwriters and performers were having problems financially. Part of the wider story of the novel is about that. If fame and recognition turns out to be brief, then how are you going to adjust to what happens next? Often that means forty years out of the spotlight.

So I always wanted some profits to be donated to the Benevolent Fund. That’s important. But the book should inspire – and due to the detail in it and the subject matter, it will resonate with songwriters everywhere. A song is more than anything a little ball of creativity. We go through a compressed creative process to create the song. Yes, it’s still a mystery to all of us. Thank God! That, more than anything is what the book’s about.

The Story of John Nightly is out now.
Features