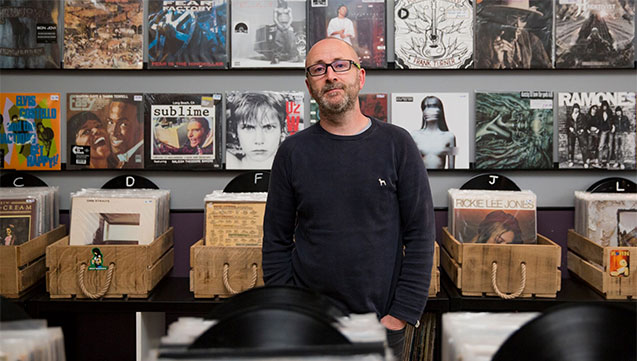 Tony Ereira, founder of Leeds-based Come Play With Me (CPWM) Singles Club, lets us in on the local scene and the opportunities available to new West Yorks artists...

Tony Ereira is the founder of Come Play With Me (CPWM), a Singles Club, music and careers hub and local resource for up-and-coming acts across West Yorkshire.

Since its inception, Tony has organised a packed-out event for women in music in association with Leeds Music Hub founder Kate Zezulka, put on electronic, pop and indie gigs across Leeds and released a string of double A-side seven-inches from some of the region’s most exciting new artists.

Previous CPWM singles have featured Fizzy Blood, Harkin, Officers, RIIB and Furr, with the next instalment landing in October.

The release will introduce local ‘supergroup’ Magic Mountain, featuring members of Pulled Apart By Horses, Grammatics and Menace Beach, alongside a track by Jon Jones and the Beatnik Movement.

With a full blown CPWM album slated for the end of the year, and an upcoming event aimed at the area’s burgeoning LGBTQ scene, we sit down with Tony to learn more about the opportunities he’s creating for West Yorks creatives…

What’s the music scene like in Leeds at the minute?
It’s incredibly varied, there’s such a rich diversity coming out of this city, it never ceases to amaze me. Just when you’ve got a handle on what’s going on, and suddenly there’ll be a new band or scene that emerges.

What’s fuelling that?
We’ve got a transient student population passing through, and I just think Leeds is very open to new music and creative independent independence across the board.

I’m a Londoner, and I’m always really excited by the openness here; people are always willing to hear you out. There’s a huge willingness to collaborate and work together.

What sort of acts do you like to work with?
I think Leeds is quite well known for its indie bands, but we’re not just for the straight, white, beardy boys with guitars. For us, it’s all about the best music. We’re trying to be genuinely representative of what’s going on here. For example, we did a women in music event, which was really well received, a few weeks ago. We’re doing an LGBTQ focus and music event soon too. But these aren’t box-ticking exercises, it’s about providing a space and a focus here in Leeds for music-makers from all backgrounds who are making all sorts of great music.

What’s the thinking behind CPWM?
For about four or five years I’ve been running another label called Hatch Records, and I kept on meeting folks day in, day out, who were doing amazing things musically but who were stuck working in the gig economy and could do with a hand up.

They had a lot of the building blocks in place, but they were struggling in one area. It might be that they had all the recording and songwriting in place but they didn’t really how PR works or they didn’t understand how to develop their audience beyond the city.

Would you class yourself as a sort of social enterprise?
Yes, there isn’t really anything like that here in Leeds. I’m a massive fan of Generator over in Newcastle. What they’re doing is wonderful. The director there, Jim Mawdsley, is mentoring me while I’m trying to progress this.

How’s the CPWM Singles Club going?
It’s been brilliant. I mean, they’ve all been incredibly well received. People are starting to trust it – they know they’re going to get consistently good music.

The October release is going to be by a band called Magic Mountain – you could almost call them a Leeds supergroup. It’s Tom Hudson from Pulled Apart By Horses, Lindsay from Grammatics, and a guy called Nestor who drums for Menace Beach. This is going to be their first release, so there’s a nice buzz.

What else does the rest of 2017 hold?
We’re doing the first of two albums later this year, and we didn’t want it to just be a boring compilation. We’ve asked all the artists we’ve worked with, and a bunch of others that we wanted to work with but haven’t had a chance to yet, to contribute a track. A few of the bands have decided to remix or cover each other.

What’s the CPWM applications/submissions process for West Yorkshire artists looking to get involved?
On our website http://cpwm.co/ there’s a submissions page. We ask artists to send us a track, preferably the one they want to release. We’re looking nine months ahead though, so any indication of where the band is right now would be useful.

What are you looking for?
We’re interested in great music, what the artists have been doing to get themselves out there and if they have any innovative ideas for our partnership. Every quarter we get five different judges to decide which acts to go with. We always try to mix it up, and then the advice I always give artists is to submit your strongest and the most innovative tracks. I’d rather hear a bedroom demo of a brilliant track than a beautifully finished master version of a weak track.
Features
Back to top