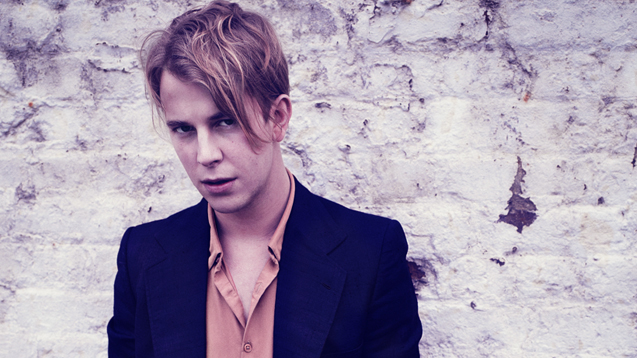 Youthful singer songwriter Tom Odell may only have passed his mid twenties but he’s already showing off a musical maturity way beyond his years.

This year’s The Wrong Crowd is the follow up to 2013’s million selling, number one record Long Way Down, a record that led to Tom being given the highly prestigious Ivor Novello Award for Songwriter of the Year.

This second record was co-produced by Tom Odell and Jim Abbiss, who has also produced records for artists including Arctic Monkeys, Kasabian and Adele. It shows off more maturity, more confidence, with a deeper vulnerability than the previous release and promises even more for the future.

We called up Tom while he was recently on tour to find out more about his evolution as a songwriter and his success...

I was always very nervous to sing. It took me a few years to find my voice.

Who were the artists you were into when starting out?

I associated myself with similar piano players as the instrument was my way in. I got into Ben Folds, Tom Waits, Rufus Wainwright, if I heard a piano in a song, then I’d try and learn it. Radiohead, David Bowie, Arcade Fire were the first band I really loved.

When did you realise that music was working for you?

When I was 12 or 13 I surprised myself with writing a song, it was a very peculiar feeling - not dissimilar to kissing a girl for the first time. It was like ‘I like this’. And then I wrote another, then ten more. I kept it to myself until I was playing at school and my then music teacher Simon Skinner walked past and overheard me playing. He said come back next week with another song. That was the encouragement I needed to be spurred on.

I did a gig when I was 21 in London. I’d done a lot of open mic nights in London and in Brighton and was beginning to run out of money. I did this gig upstairs at Ronnie Scott’s and Phil Christie from Warner Chappell and Lily Allen were both there. She’d heard about me and I remember driving home that night thinking the show had been a huge step forward. I ended up signing to Warner Chappell and then signing to Lily’s imprint on Columbia too.

Long Way Down was your debut record – were you taken aback by its success?

Yeah in some ways. I was completely overjoyed but it was such a whirlwind I found it hard to process it all you know. Which is why it’s taken a while to come back with the second record. But it’s been a wonderful four years since then, being able to play music everyday. I’m very grateful that I’m in a position to do this. When I was 18 that was always the goal. The aim was to do this as a job.

Was it daunting to follow up on the first?

I think every record is daunting. The first one even more so perhaps as there was a lot on the line with the first. I’d got the deal and had to prove I could do it. It was I wanted to do so much. With the second I was more confident, I knew what I was doing, of course there was pressure but I imagine that’s how it will always be for every artist. It’s always going to be there.

Well the strange thing about being a songwriter, it’s such an elusive job, attempting to find music. Sometimes I wish I was doing something simpler, with a more defined role, as some days it can feel very directionless. You just need to make sure you’re in the right frame of mind when inspiration does hit. The majority of the time, you’ll find me sat at the piano writing and working.

Do you spend a lot of time refining and polishing?

Yes there’s a lot of ideas. To be honest I remember when I first signed a deal, for six months it was the only period in my life when I had writers’ block, I couldn’t write. My publisher came to the studio and told me I had to finish something. I had a 100 ideas without having finished any of them. Now I try to always finish, to stop that horrible head spin when you have so many ideas that you can’t finish any of them.

How was winning the Ivor as songwriter of the year?

It was great, it came at a really good time after the first album and coming into writing the second. It gave me a lot of confidence, as it was something I’d dreamed of as a teenager. I still feel very lucky and have to pinch myself that I won one.

I’m writing as much as I can, I’ve got a few songs already but it’s tricky on tour. It’s a strange place, I need a bit of space and quiet to write but there’s often no room to do so, so my heads not always in this space on tour either. It’s very caffeinated, you’re never really balanced. I love it.

Among all the success, what’s been the strangest thing to have happened to you?

This is a funny one - when I was 16, I signed to PRS for Music - and remember receiving this magazine in the post, I used to read it, I’m quite pleased to be in it.

I’m still ploughing away as well trying to write songs, the advice I’d have for my 15-16 year old self would be is it’s all about the song. Everything else is superfluous and not relevant. I always feel much better after writing a good song, and it’s the one thing people hold dear. The one thing that still gets me up every morning and keeps me awake at night is songwriting.