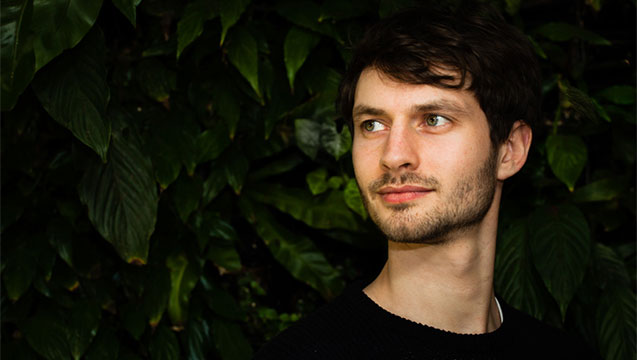 'Opera is often a publicly subsidised catwalk for the one percent': progressive Welsh composer Tom Green tells it his way ahead of the opening of his new chamber opera The World's Wife...

‘I’ve got an idea for a WWE wrestling opera with amplified wrestlers singing auto-tuned atonal arias while beating each other up,’ says up-and-coming Welsh composer Tom Green.

‘To my surprise, no one has shown interest in funding it yet,’ he continues. You might giggle at the idea but who knows, he could be serious. Tom is a switched-on talent who’s genuinely pushing boundaries in an intelligent and witty way.

His music forges progressive new links between classical music, contemporary culture and technology, offering a utopian view of what the world could look like, 10, 20, 30 years from now.

On 15 October, the Welsh National Opera will premiere his first ever chamber opera, The World’s Wife. The enlightened work, which has been funded by PRS Foundation, is based on Carol Ann Duffy’s collection of poems with the same title.

Scored for solo soprano, string quartet and loop pedals, and performed by singer Amanda Forbes and the Mavron Quartet, it presents parallel tales of history and myth - usually told from a male perspective - through the eyes of famous men’s spouses and forgotten women.

Highlighting the feminist approach to his work, Tom also quotes music from female composers such as Clara Schumann and Barbara Strozzi in the score.

But for Tom, it’s less about constructing musical building blocks live on stage, and more about messing with the linear nature of performance.

Here, we learn more about what’s in store…

The World’s Wife is your first chamber opera – how did you approach it?

The process of getting it funded, organised, finding the director and all key personnel was so long and arduous – over three years - that I’ve had a lot of time to mentally prepare for the work, despite having a very short amount of time to write it. Many ideas just appeared on the Megabus, returning home from a trip to find producers, funders, backers.

When writing an opera it’s normal to start with a libretto that will prescribe characters, scenes and general narrative arcs, but here I had a set of 31 poems/characters with no clear narrative or order.

Finding a convincing order was a huge challenge – I couldn’t have made a conventional plot even if I wanted to, and so choosing eleven poems and characters, I laid them out so that within the variety there are certain wider contours. For example, the first poem is about adolescence, and the last is about motherhood.

I like opera, but I’m very cynical about the role it plays in our society – often tending toward a publicly subsidised catwalk for the one percent. Chamber opera is already a much broader spectrum than this, but I wanted The World’s Wife to completely avoid that ‘sponsored by Rolex’ aesthetic so many pieces are colonised by. Using the loop pedals and ‘technologising’ the piece definitely helps to distance it from this, as although it’s 2017, technological performance is still outside the understanding of what constitutes ‘polite’ opera.

What was it about Carol Ann Duffy’s poems that inspired you?

The World’s Wife is a poetry collection that follows the spouses of famous characters from history and myth, so we have Mrs. Darwin, Queen Kong, Frau Freud etc. The poems operate on many levels – they reinsert women back into our historical and mythical narratives, but do it with such gravity that we’re left wondering what stories we’re telling now, and who’s being erased from them.

They’re also hilarious, and occasionally terrifying. One of my favourites is Queen Herod, in which King Herod is a useless drunk, and the Queen orders the genocide to protect her own child. It’s classic Duffy, as through vivid language she helps us understand, and possibly even sympathise with, someone committing mass murder. That’s key throughout the work - these women are not all heroes - the important thing is that they are there.

In it, you’ve referenced music from forgotten female composers – why?

In the early stages of getting the project together, Diana Ambache asked me how many dead female composers I could name. I barely scraped five, and was embarrassed and fascinated – I’d allowed my culture to write women out of musical history, and I’d been tacitly involved – a direct parallel of what The World’s Wife confronts.

The poetry is about reinserting women back into our old narratives, and so it seemed obvious that I should compose the piece only using material from past female composers. I went on a long journey discovering many brilliant composers, and also researching the details of their lives.

For anyone interested, Clara Schumann’s diary is a brilliant starting place to understand the mountain of extra challenges female composers faced, some still painfully valid in the present. The material I’m using ranges from a tiny three-note motif, all the way to a complete quote of many bars, and my intention was always to celebrate this brilliant music and its creators. It’s a complex area though – am I just another man stealing women's work for glory? Maybe. Questions of gender are still with us, and they need to be asked.

The work employs loop pedals - How do you feel about recent derisions in the media about composers and performers who use loop pedals?

They’re mostly deserved! It’s not too much to say that looping is a metaphor for our broader culture at the moment – we replicate everything so easily that we forget how to make anything new. The technology can limit or liberate. Having grown up using loop pedals in the conventional block-building texture model as represented by Ed Sheeran and co, it took me quite a while to discover all the other ways of using a device that really is about transplanting time.

Yes, the looper can operate as a texture and groove builder, but it can also be a memory box. In The World’s Wife, one singer plays many characters, and so she uses the loop pedal to create duets and trios between them, melting her identity between the character of the moment and the character trapped in the digital.

If you hear a vocal phrase, then it reprises 30 minutes later, then 30 minutes after that, always in a different context, how do we hear those differently? Are they really the same? How do they relate to the present – the live performer?

We’re moving toward a point where the external details of our lives - via digital media – are never forgotten. What happens when we’re surrounded by these things, without the implicit material they came from? Who are we if the shell of our past is always present, but without the spirit that filled it?

In The World’s Wife, there are eleven characters. As each ‘wife’ is performed, material is stored and then reprised later until the characters make a huge chorus. At that moment, are these all separate characters, or are they all part of a supreme archetype: The World’s Wife? loop pedals allow me to pose this question, and that’s why I’m interested in them.

Why are you attracted to use unconventional tools and instruments in your classical compositions?

I’m not sure if I am. A loop pedal is very normal for electric guitarists, electronics are increasingly used with classical performance, and most young composers now use live sound manipulation programs like Ableton, which we’re using for the loops in The World’s Wife. Since John Cage started preparing pianos, unconventional instruments formed their own conventions. In most modern art forms now it’s normal to use unusual tools – paint with your vagina, dance with crutches etc. The really unconventional artists now are those who willingly embrace restrictions on the surface of their work. Imagine devoting your life to only writing choral music. It worked for Thomas Tallis.

How do you think classical music is evolving in 2017? Are there any trends you’ve noticed?

Well, we still haven’t found a better name for it than ‘classical’ music.

I’m quite excited by composers making politically charged work without falling into the trap of the polemic. Ted Hearne’s work exemplifies this for me – check out The Source.

The more problematic counterbalance to this is a trend that is near ubiquitous now – that all new music comes with a programme. If you were to look at programme notes, composer talks, and titles of work, you’d think that music for music’s sake – absolute music – was not an option any more. It’s something we’ve silently digested as a culture, and now every composer ends up grafting on a clumsy statement about the phases of the moon, the Syrian war, inflatable orgasm, even for a five-minute flute solo.

This isn’t just an aesthetic trend, indeed, it may have originated elsewhere. As funding bodies make more demands for music to be ‘ground breaking’ and ‘engaging’ there is a greater tendency to add narrative where aesthetically, no narrative is needed. In a written funding application (which almost all are) it’s hard to sell String Quartet No.3 to the Arts Council, but ‘A journey through the erogenous zones, as explored by string quartet’… they’re laughing all the way to the spank.

Well, on the topic of unconventional narratives, I’ve got an idea for a WWE wrestling opera with amplified wrestlers singing auto-tuned atonal arias while beating each other up. To my surprise, no one has shown interest in funding it yet…

The World’s Wife receives its premiere on 15 October at Wales Millennium Centre, Cardiff, before touring concert halls in Brecon, Swansea and Holyhead.