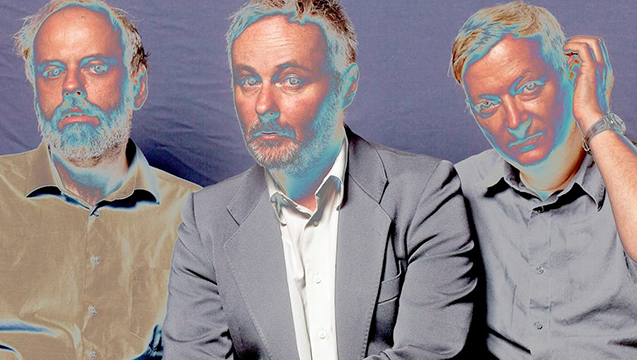 Cavern of Anti-Matter and Stereolab lynchpin Tim Gane on his new LP, the art of musical futurism and his problem with band reunions...

Over four decades, Tim Gane (middle) has changed the parameters of British pop, rock and electronics with his Farfisa-fuelled wizardry and kosmische high jinx.

His musical futurism has propelled genres and broken boundaries, helping imbed an appreciation of motorik rhythms and continental kitsch in a new generation of sonic explorers.

As a key member of experimental bands Stereolab and McCarthy, and more recently as a filmscore composer and founder of the expansive electronic trio Cavern of Anti-Matter, Tim has restlessly pushed his understanding of musical form.

Through Stereolab, he opened his ears to French chanson, krautrock, avant-pop and electronica, consistently producing albums to feed both the head and the heart.

Their sophomore album void beats/invocation trex, which landed a couple of weeks ago, clocks in at 72 minutes and offers a meaty, beaty excursion into the realms of lo-fi electronics and progressive improvisation.

We were lucky enough to spend some time with Tim to learn more about the Cavern project, his thoughts on music-making generally and the problem he has with reunion tours…

How did your new record Void Beats come about?
We’re more of a band than we were on the first LP – all three of us are pretty much on all of the record. There was a lot more improvisation this time too. I would sequence a line and we would improvise over that, record three or four different versions and then put them all together. In that way, the record is kind of live. It come together through a mixture of live recording and editing.

How did the live element change the dynamic?
As a band we’ve only played live about eight times but four of the songs on the record we’d performed in that environment. So by the time we got to record them – although they were still improvised – they were also a little more formed.

It was weird for me because it’s not something Stereolab would do, and the last time we rehearsed for a record would have been in about 1994! It was weird to play new tracks live and try to get them into shape. It’s a different way of doing things. I like the exploratory nature of the studio and working things out there – I don’t like having everything rehearsed and done so you just go in and record it. To me that’s no so interesting.

Did you have a clear idea of the sound you wanted before you started out?
I tend to have a clearer idea of what I don’t want than what I do want. It’s more about deciding some guidelines, some rules you want to stick by so you don’t have every choice in the world. One of those decisions was to just use the instruments we've got. I'm not so interested in using software or MIDI instruments.

I've just got a feeling about what sounds good at that moment, on the spot. It's a bit of a mixture of intuition and personal taste I suppose. There's certainly no effort to try to sound like anything specific. Sometimes you just have to try to write a good sounding piece of music.

In some ways this new project is similar to your Stereolab work as you're riffing on genres and mixing loads of influences together. Is that just a product of what you've been listening to over many years and your experiences with music?
Yes. Although it is hard to say, from a personal point of view, how much things sound similar to stuff I've done in the past. I tend to be attracted to certain sounds or certain chords or certain rhythms or certain ways of putting music together, so I suppose those things come out in everything I do.

I would like to think I’m pushing it into some different realms though. I'm trying to be honest with what I like to do and what I’m attracted to in music. Also, I’m technically restricted by what I can play. I'm not an instrumentalist at all - I'm a very basic rhythm guitar player, that's about it.

Part of the Stereolab sound came from trying to make something quite primitive or simplistic and non-technical - and also be interesting over a longer period. I always want to keep that combination of primitive elements but perhaps put them together in a different way.

A lot of the Cavern of Anti-matter stuff is instrumental – does that give you more structural freedom?
Yes in some ways it does, but you can also have a lot of freedom with vocals. You don't have to make three-minute pop songs. At the moment I like trying to make music work just by itself and not find that you're missing a vocal.

People have told me that it's very hard to book concerts for bands that are instrumental, but I don't know about that. Just look at bands like Tortoise!

How did your move from London to Berlin influence your relationship with music?
On a day-to-day basis it's quite different but I quickly got used to it. I've been here 11 years now. It becomes the new normality, it's not so exotic. But at the same time, being in a place where you didn't live all your life or you weren't born in is always a little bit different – there’s a little more detachment.

It’s definitely a more laid back city than London. The roads are big and wide and there's lots of space. Everything is a little slower. I really like that because I didn't really realise how hectic London was when I was living there. Now it seems so crazy.

Musically, the main influence has been the ability to relax and take more time. Also the studio is insanely cheap compared to London prices. I’ve just moved to new one which I built with another guy. You can't really find an old building in London, put a studio in the top of it and pay the sort of money that you can here. So that puts a lot of pressure on you to keep it going. It's difficult to run a studio in London.

Is there a piece of studio kit that you couldn't do without?
Yes – I have a small set up - a Roland 606 drum machine, a Roland System 102 sequencer and an ARP Odyssey synthesiser that's connected to a BEL delay unit. A lot of the stuff on the record was basically done using that – or at least the basic ideas were.

A lot of tracks weren't really tuned, they just happened to be on the sequencer from say three months before when it was last used, at a random setting, and I would just tape it. It's not that complex. It's not like sitting there with a guitar.

So you prefer to limit yourself to a few bits of gear?
Yes. It's more playful in a way - I just have to focus on the four things. I mean a lot of people do really great things with soft synths and software and stuff, but it’s not for me.

Have you ever been tempted to do a Stereolab ‘greatest hits’ tour or an album playback gig?
No! People have asked but I’m not interested in doing it. I mean, Stereolab wasn’t even such a long time ago. For me, it would have to be a bit more than a retrospective thing. It’s a good way to make some extra money but apart from that, there doesn’t seem to be much point to it.

One of the problems bands face when they reform is, although they’re back together, they’ve lost the identity they had before. The line-up may look the same but they've got to apply new ways of working. So many groups just seem to do versions of old stuff and I don't find how that fits with who they are as people. I can't get my head around how that would fit with the Stereolab concept, which was not at all about doing that.

Then again, in two years’ time it could be all about playing that ‘hit’ album [laughs]. I remember when ATP Festival wanted us to do ‘our best album’ - Emperor Tomato Ketchup - and I said, ‘that's not the best album. What are you talking about?’ I don't like the concept of playing a best album. It gives me the shivers. I don't want to get involved in all of that.

A lot of younger bands still cite Stereolab as a massive influence. Why do you think that is?
I don't know. When Stereolab were going, especially in the nineties, there were definitely some bands that other bands used to like more than the general public did! We were one of those bands.

I think some of the ideas in our music were quite open to interpretation. They weren't all locked down so you could take quite a lot from it. There was space for your own interpretations. I think music like that will always be more influential than music that's totally locked down and sealed.

So you were more of a musician's band?
Yes. You need to leave space in your music for the listener’s interpretation. That's very important. It's an important part of jazz music, whereas rock and pop music is usually made with the purpose of being swallowed whole. There's no room to develop any relationship to it other than one of consumer and maker.

So I think that although Stereolab were loosely working within pop and rock boundaries, there was quite a lot of space. Sometimes you can have ideas which are good but you also have to translate them into music that is good as well.

What’s next for you?
We’re playing at Primavera and are doing six other shows around that time too. We're not a super big touring type of band but yes, we'll definitely be doing a few live shows over the rest of the year.

http://www.cavernofantimatter.com/
Features
Back to top