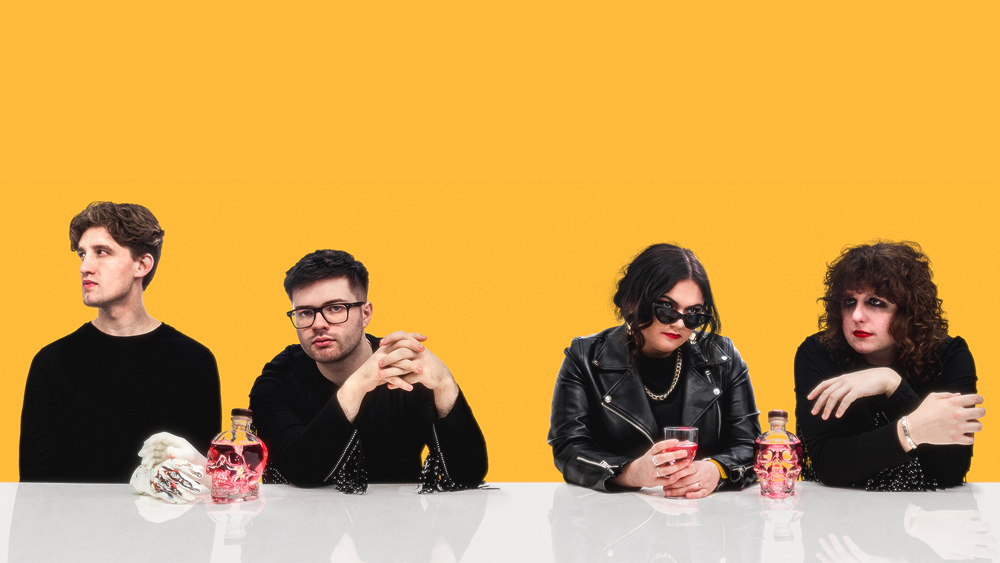 The Paisley four-piece have been flexing their creative muscles with arch art-pop sprinkled with disco dazzle since their inception in 2014.

Born of the rich grassroots scene in Paisley, The Vegan Leather developed their sound and honed their live show gradually expanding out beyond their hometown.

While sonically the record is primed with dancefloor ready tunes, thematically they cover the gamut of contemporary concerns facing 20 somethings.

Here we chat to Gianluca about the band’s roots, the story behind their debut album and what they have lined up for the future…

How did The Vegan Leather form?

We all met in school. We also met through a thing called create, which was an open mic night, back in the day. There were 30 to 40 people there and then it grew into 800 people. It was crazy. All based in Paisley. The three of us met each other through that, me, Marie and Duncan and we met Matthew through the Hit the Road touring project. We got together and we’ve been making music ever since.

It’s a pretty equal four bits. Somebody might come in with a chord progression or someone will come in with a melody or lyrics and we make it all fit together. It’s all a big melting pot. Or if someone comes in with a full idea, we all like to put our own stamps on it. Everything has to go through the board, as such [laughs]. It’s quite democratic.

The themes are all based around what it’s like to be in your early 20s in the current times. Anxiety, lots of existential dread, lots of dread [laughs]. We cover social anxiety. We cover what it means to be a musician in 2019 and go through one-week cycles – one-week release cycles and slightly longer ones – the pressures of that, always having to producing content. Whether it be pictures, or videos, or music itself, the stresses of that. And the good points as well.

What’s the story behind the record’s title?

It’s the first lyric of a song called The Hit and we feel it just captured themes and every topic that we talk about on the album. Over four words it rounds up the album quite nicely.

The album broaches weighty themes like gender politics and the pressures of modern life, often under the guise of a sunny melody. Is it important that you say something with your music?

I think it is very important, for us anyway. I mean don’t get me wrong, there’s nothing wrong with escapism in music, it’s a very valuable thing to have. I do think, in the current climate, you’re best saying something for your own integrity and try and make it clear. Even though our lyrics are a bit vague [laughs].

Given the added pressures on artists now, how do you feel about the music industry as it stands?

We only came into our own, in terms of self-promotion, just now. We’ve formed as a band in the time when it all is self-promotion. Content has become a lot more personal to each individual artist. You have to make it personal, but you have to make it flashy at the same time. There’s a lot of learning how to do things by yourself. Not just video making or whatever, but how do you make it interesting? You’re always pushing your creativity. I think we were just born into that.

Do you think there’s enough support for emerging artists?

I think we have some really good powers of support. As I mentioned, when we started out when we were younger, we had Hit the Road and Behind the Noise, which Matthew was a part of as well. That was invaluable for the experience of playing gigs. They were introductions to what you do with social media, gave pointers on stage etiquette and presence, and also gave invaluable experience of playing gigs at a super young age. It sets you up for going into it. Stuff like that is totally invaluable for young musicians coming in.

Would you like to see more of that kind of thing?

When I first started to get into music ten years ago, one of my main things was I saw a lot of music played, like at unsigned Battle of the Bands. You don’t see much of that anymore, so I think having things at a local level so young people can see if they want to make music, they can do it. They can see that it is possible.

It’s all good supporting people in bands, but I think what it means to be a successful artist is changing a lot in terms of solo, producer-based artists. We need to cover that wide array as well.

You’ve already cultivated a great live reputation. Do you prefer writing and working in the studio or playing live?

When we go in and make the demos, we know what we’re doing. We go in and see if we can play it [laughs]. Then we make changes. When we were recording the album, Paul Savage was a really good catalyst for idea. We got Matthew and Duncan to record the bass and drums all at once, and it gave a total flavour that we just didn’t have. We got it all done in two days. 15 songs. Madness. I think when we approached the album, we had demos, but they were all very rigid. We didn’t sound like a band, but Paul was a really good catalyst for making that happen.

What’s the process of translating the album to a live show?

We have all the assets there in terms of extra synthesisers and all that. Sometimes it’s even writing different parts for guitars, or something like that. Something may work on record that doesn’t necessarily translate live. It’s just about thrashing it out between the four of us and being harsh critics of ourselves until we know it sounds good.

The band are from Paisley, do you think your environment has impacted your sound?

I think so, yeah. We never ventured into Glasgow too much to be honest, so it was always a microcosm of people that we know. I say microcosm, it’s a big town. There are definitely attitudes that do inform you and your personality. Of course, there’re big stars like Gerry Rafferty, and people don’t shut up about them, so you listen to them and you get informed by them. It’s class [laughs].

What’s your take on the Scottish music scene currently?

It’s vibrant, in loads of different sectors. Of course, there’s the resurgence of the punk scene, but the electro scene is really good as well. Bands like DRIFT and Chuchoter are so interesting and so different. There are so many different kinds of music being made at such high levels. Everyone’s so confident with their sound. I very rarely listen to a band and feel like they don’t know what they want to sound like. They know what they do, and they do it well across the board.

I am currently repeating Chuchoter’s EP. I love that. DRIFT as well, the latest DRIFT single. And St.MARTiiNS, they’re incredible.

The album’s coming out on 25 October. We’re doing King Tut’s about a week after that. And then we’ll just be gigging regionally until the end of the year. Next year we’re planning on releasing a lot of new music throughout the year. We don’t want to slow down the release process as such. We didn’t release anything for such a long time, I think the album, for us, feels like a statement, like, ‘right, we’re here.’