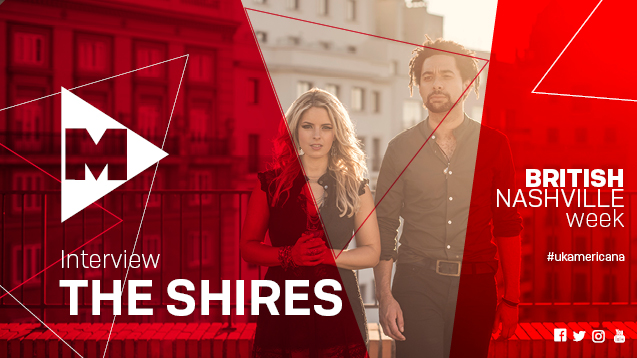 ‘People literally laughed at us when we said we are a country act.’ – UK stars The Shires tell us how they’re the ones laughing now after changing the face of UK country and Americana forever…

It’s hard to argue with the success of British country stars, The Shires.

The popularity of the duo - singer songwriters Ben Earler and Crissie Rhodes - has been unstoppable ever since the release of their 2015 debut LP Brave.

The record offered a slick, contemporary pop take on country music that has resonated with an ever growing audience both here and in the US. So much so that the group secured a contract with American record label Universal Music Group Nashville, becoming the first ever English country act to be signed to a major Nashville label.

More recently, the duo have been presented with their second gold record in 12 months, with their sophomore album My Universe hitting sales of over 100,000.

The band’s debut record, Brave, also achieved gold status last year and has so far sold 144,330 copies, while My Universe has notched up sales of 102,077 since its release in October, according to the Official Charts Company. As the fastest selling UK country outfit of all time, we caught up with Ben from the band to learn more about their success, songwriting and why country is no longer a dirty word among music fans…

How did you the Shires first get together?

We met on Facebook through a mutual friend in May 2013 when I posted a status saying there must be a female country singer around London. Looking back it feels like fate had a plan, as we only lived 20 minutes from each other. We literally got together the next day at my flat in St Albans and the rest is history.

Where does your love for Nashville/country music come from?

Crissie has been a lifelong country fan. She would listen to all the greats with her gran and sing along to artists like Patsy Cline and Dolly Parton. I was a much more recent convert. I heard Need You Now by Lady Antebellum in early 2013 and was hooked.

Which artists have been the biggest inspiration behind your sound?

Definitely Lady Antebellum. We are both huge ballad fans at heart, and they have so many amazing ballads. They really let the song breathe in the production, which is something we have always tried to do. Touring with Little Big Town in November 2015 made a huge impression on us for our second album. The excitement in their shows is off the scale. Playing arenas with them really inspired us to have a bigger sound on My Universe, with great, fun moments for a live audience.

We write a lot in Nashville and we love the way they approach songwriting over there. There’s a real ‘song a day’ culture and everyone lives and breathes songs. The attention to the lyric and the story is so inspiring and refreshing. We’ll sometimes spend an hour sat in the room, talking it over and over until we have nailed down the story or theme. Sometimes it just does come to you though. One of our most popular songs I Just Wanna Love You was written in a matter of minutes!

You’ve obviously enjoyed some incredible success over the last few years as the UK’s biggest country group - what do you think have been the contributing factors behind it?

We really just make the music we love and don’t try to fit in anywhere. When we first got together in 2013, people literally laughed at us when we said we were a country act. From day one we focused on writing great, honest songs and doing whatever we could, whenever we could. Back then we had massive dreams of going top ten and gold records but didn’t know if it was really possible. The whole last four years have taught us that if you just do what you do then the sky really can be the limit.

Do you think UK audiences have always been looking for a homegrown country act?

The UK country scene was definitely desperate to see a homegrown act break. In terms of the non-country UK audience, people will always love great songs that they can relate to and singalong to. Country is a lot more accessible lyrically now for UK audiences and is definitely surprising a lot of people who thought they knew what country was. It’s clear to see in the huge rise in numbers of listeners.

How important has performing at C2C been?

C2C has been huge for us. It’s amazing to have these huge American stars coming over and we’re so lucky to be able to watch them relatively cheaply. But C2C has also been great in supporting UK acts with the pop up stages around the arena. We first played literally weeks after signing to Decca and the fans really seemed to take us to their hearts. We played the Satellite Stage in the main area when we returned the next year, and literally found out on stage that we had hit number ten on the main album chart with our debut album Brave. It is still one of the most amazing moments in our career, with 15,000 UK country fans cheering us on as we walked to the dressing room.

What was the tipping point with your music as the Shires? And have you been surprised by your achievements?

Going gold with our first album was a huge tipping point for us. To achieve that level of sustained sales is a huge achievement these days and really surprised both of us. Being invited to play The Grand Ole Opry in Nashville was a huge honour as well and is still a pinch me moment. It really felt like we were getting the royal country stamp of approval. It’s the pinnacle for any country artist to play there.

Want to read more about UK country and americana? Then head to m-magazine.co.uk/tag/country-and-americana for more interviews and features.