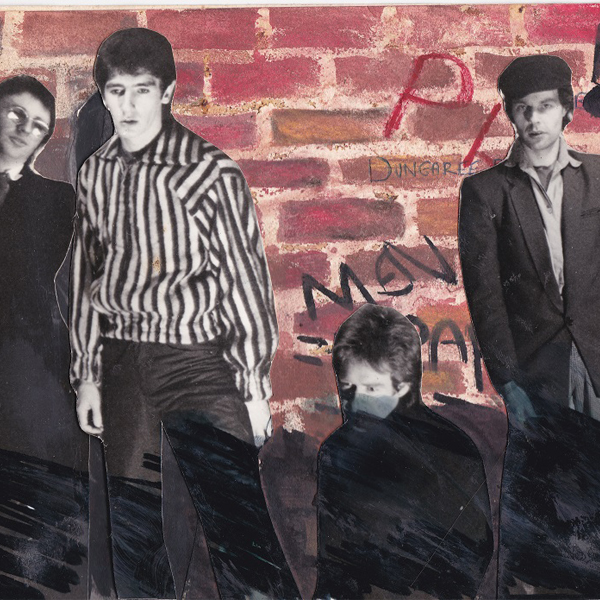 We quiz cult Mancunian post punkers on their debut, Pay Attention! and how it sounds better than ever 30 years after its release…

However, it’s their musical legacy in their original outfit which is now the centre of attention, following a reanimation by Adrian Sherwood’s On-U Sound label. The group's debut, Pay Attention!, a mix of dub and angular guitars, has now been remastered and re-released, sounding like a great mix of Liars and Wire… We caught up with original members Chris and Bob to find out more…

How did the Mothmen first get together?

Chris Joyce (CJ): The Mothmen formed for me, Tony Bowers and Dave Rowbotham after the demise of the Durutti Column. Bob was getting fed up of the Alberto Y Lost Trios Paranoias so we decided to join forces and try some experimental music based on our broad range of influences and passions.

Bob Harding (BH): Tony left the Albertos a few months before I did and had immediately been snapped up by Tony Wilson to complete the Durutti Column’s line-up. That only lasted a few months as Chris, Tony and Dave all quit following major disagreements with Wilson. By that time I had also left the Albertos and was invited to join the other three in what would become The Mothmen.

What was the scene like in Manchester back then?

CJ: The Manchester scene was vibrant and creative after the fairly one dimensional punk rock era. A lot was going on in clubs like Rafters and the Russell club as well as a myriad other venues.

BH: Yes, there was plenty going on - a couple of other venues that come to mind are Stoneground (later renamed The Mayflower Club) in Belle Vue and the Ardri Ballroom in Hulme. So there was plenty of live music but Manchester didn't have many decent multi-track studios at the time. There was 10cc's Strawberry Studios in Stockport, Andy Mac's in Cheadle Hulme and Cargo Studios in Rochdale.

Where were you looking for musical inspiration?

CJ: We listened to all sorts of music at the time from the likes of Kraftwerk, Frank Zappa, Captain Beefheart, anything and everything Jamaican, Tim Buckley, Jimi Hendrix. A real mixed bag. A lot of esoteric music as well.

BH:  I should also mention the likes of Sly Stone, Bobby Womack and of course the blues (Albert King was a particular favourite). Although you won't hear those influences on Pay Attention! they were all in the pot too.

Pay Attention is your debut LP - what was the thinking behind the record?

CJ: It was a time in music where it was still played live. There weren’t endless takes or overdubs. We wanted the energy and creativity we had live to come across on vinyl.

BH: All the basic instrumental tracks for the album, plus Vegetable Man, one of the reissue bonus tracks, were recorded in a single night-long session. Later we laid down the vocals and overdubbed the percussion and horns.

A word about the horns; several reviewers of the reissue have alluded to "skronking sax" but the horns Tony and I were playing were actually a type of Chinese shawm known as a that (pronounced “dat”). It was a double-reeded instrument you had to blow incredibly hard to produce a sound. Neither Tony nor I had a clue how it was supposed to be played but we liked the piercing sound it produced.

How did you hook up with On-U Sound? What drew you to Adrian Sherwood and his label?

CJ: We met Adrian in Manchester at a gig where we were supposed to be supporting Prince Far I.  Adrian was touring with him at the time. Prince Far I didn’t turn up but we met Adrian and found we had a lot in common as far as music went.

BH: Adrian was drawn to us, or more precisely, led to us. The first ever recordings made by The Mothmen (with the exception of Dave Rowbotham who didn't participate) were two tracks which eventually appeared on the debut Suns Of Arqa LP, Revenge Of The Mozabites.

The album was co-produced by Mick Ward, now known as Michael Wadada, and Adrian although we didn't meet him at the time. This was prior to the founding of On-U Sound and Adrian had a label called 4D Rhythms at the time. The plan was to release the Suns Of Arqa album on 4D but Adrian decided he'd rather put out an album by a band who played live as well, Suns Of Arqa being a strictly studio-based project at that point. Mick said "I know just the band for you". He had also just started to promote shows at the Ardri Ballroom so he added The Mothmen to the bill for the Prince Far I show and brought Adrian along to see us.

What caused the band to split?

CJ: Dave Rowbotham left after Pay Attention! was finished recording. He was gone before it was even mixed. The Mothmen went on to record another album called One Black Dot for Do It records. It all became a bit business like and the fun and enjoyment went.

BH: No-one had paid any attention to Pay Attention! so there was definitely some kind of effort to be a bit more accessible and commercial on the second album but it never felt quite right. We undertook a nationwide tour supporting soul/funk band Linx to promote the album but it didn't sell and the press reviews were lukewarm at best. As Chris says it wasn't so much fun anymore and the future didn't look too promising so we decided to call it a day.

34 years after the record has been released - are you surprised that it’s being reappraised?

CJ: I am so proud now that this recording is being reappraised. The Mothmen were way ahead of their time. We listened to lots of African, Indian and Australian aboriginal music as well as all the previously mentioned artists. This was well before there was genre called World Music. We tried to push the boundaries of the day. Not always successfully but we enjoyed trying.

Financially it was a disaster so this time round I’m hoping we will make millions of pounds. Maybe Simon Cowell will pick up on it and manufacture a Mothmen style group.

BH: I'm still finding it a bit mind-blowing that this reissue is happening. This was a record that disappeared off the radar almost as soon as it was released and has been lost in the mists of time ever since. So to have it suddenly come back to life after so long is a bit of a strange experience. But it's very gratifying that it is being reappraised and even earning four-star reviews. It seems like people are getting it a lot more than they did back in the day.

http://on-usound.com
Features
Back to top