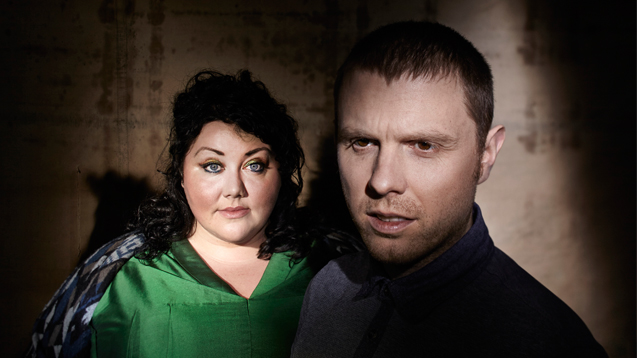 Drawing on their love for soul and ambient electronics, alongside their roots in Irish folk, the group have enjoyed a successful 2016, in part thanks to the critical applause handed to their debut album, Carry Your Kin. The album, recorded in Manchester and released on Peter Gabriel’s Real World Records back in July conjures up images of Bat For Lashes dueling with Bert Jansch out in the woods. We quizzed Stuart to find out more about the record, success and plans for the future…

How did The Breath get together?

Although Manchester has a lot of different music scenes, there’s a lot of cross-over between them. I was looking to work with a vocalist and I’d heard of Rioghnach, so I was able to get in touch with her through friends of friends. We hit it off straight away, both personally and creatively.

What was/is the main inspiration driving the group?

One of the things that Rioghnach and I have in common is that we are both really electric and open-minded in our listening tastes. I guess that the main inspiration is to create music that doesn’t fit into any specific genre, but that merges all of our different influences from around the world.

How does the creative process work for the band?

I’ll generally come up with a chord sequence and then get together with Rioghnach and work out some melody and lyric ideas. We’ll then get together with the rest of the band, either in a rehearsal room or on a gig at a small venue, and work on the arrangement. A lot of it happens quite intuitively, but other tracks can take a bit more time and work.

Carry Your Kin was released earlier in the year to some acclaim - what was the thinking behind the record?

The album came together sporadically over a six year period. We sent a demo to the label, Real World Records, who then gave us some studio time to record the album. It was amazing working in the world famous Real World Studios - definitely an inspiring place to record! We then did some more recording in Manchester before sending the tracks down to sound guru, Tchad Blake, to mix.

Although I don’t want to sound too much like an old hippy, just being alive in a moment by moment basis is my inspiration.

We just played a gig at the Foundling Museum in London. That was a really beautiful space to play.

Are there any new artists you’re tipping for future success?

One of my favourite artists who is really starting to get some great recognition is Jordan Rakei. He’s going to be massive!

What does the future look like for The Breath?

We have a winter tour around England during December and January and will be doing some festivals and short tours around Europe later in 2017.

Have you any advice for songwriters and composers?

You need to work hard and write and rehearse your music daily. That in itself is successful - whether or not commercial success happens as well is a separate matter.

The band are out on tour over the coming month. Catch them at

Watch the band’s video For You.