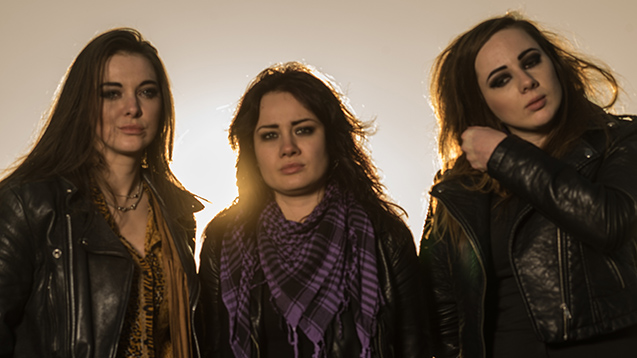 Lock up your teenagers: The Amorettes are hard, loud, fast and guaranteed to take you on a sonic assault with their high energy dose of 'take no prisoners' rock...

Lock up your teenagers: The Amorettes are hard, loud, fast and guaranteed to take you on a sonic assault with their high energy dose of 'take no prisoners' rock.

Described as 'Airbourne fronted by Joan Jett' and a 'female Motorhead', the Scottish three-piece burst onto the scene in 2015 with their album, Game On, produced by the Grammy-nominated Chris Tsangarides (Judas Priest, Thin Lizzy).

A relentless tour schedule supporting the likes of Ash, Thunder and Black Stone Cherry has helped the trio refine their live set, which promises nothing short of a 'gritty, punk-tinged rock 'n' roll explosion.'

Industry heavyweights Luke Morley (lead guitarist and songwriter of hard-rock legends Thunder) and engineer Nick Brine (Bruce Springsteen, Coldplay) were brought in for the band's latest record, White Hot Heat, which has helped cement their status as one of the most exciting new British rock acts.

With a new album in the works and a headline slot at Cambridge's Subterranean Festival coming up, we caught up with bassist Heather McKay to find out how the band got together and how they built their fanbase the DIY way...

How did the three of you meet and start the band?
Gill and Hannah (my sister) met at music college in Edinburgh and they both just decided that they wanted to start a girl band. They were both into the same kind of music and there just wasn't that many bands around specifically just for females. They had a bassist before me but then she left after a couple of months. So Hannah was like, ‘who do I know that plays bass?’ and they asked me. I was straight out of school!

You've worked with Chris Tsangarides and Nick Brine on your albums. How did those collaborations come about and how was it working with them?
It was our manager that put us in touch with Chris Tsangarides originally because he looks after some of the bands that Chris has produced, like Girlschool. That was great to work with him, it was the first time we'd ever really worked with a real bona fide producer and our first professional experience in a studio.

With White Hot Heat, it was Luke Morley from Thunder that was producing it – we've known him for years because we had toured with his band before and always kept in touch with them. He knows Nick Brine who's worked with Thunder, Ash and all these bands we've toured with, so it was kind of like putting two and two together. It was a brilliant experience.

You’ve toured all over the UK and Europe, with the likes of Wasp, Ash and Thunder. Who would be your dream act to support?
We all love Motörhead, we're massive fans of Lemmy. That was always on the top of our list until he sadly passed. Eagles of Death Metal, that's been bandied about for a while. And more modern rock bands like Queens of the Stone Age and Biffy Clyro.

I feel like we're a bit of a genre spanner sometimes. When we played with Ash, that was so much more of an indie kind of audience. It was totally different to when we toured with Thunder, who are like hard-core heavy metallers from the eighties!

You built your fan-base with an old fashioned attitude of 'take it to the people.' How did you do that and what advice would you give to new bands?
We just literally played anywhere and everywhere, as much as we could for the first few years you know. It's good just to get out and meet all these different people. That's how you find your manager, your techs. Yeah just networking: that's what it is, and building up the fan base organically. For us, that was the best way to do it. A lot of bands are more online based, but for us it was very much get out on the live scene. We're all rubbish with computers anyway!

Your song titles definitely make a statement, with Pervert Alert, Man Meat and Let The Neighbours Call The Cops. What's the story behind those songs?
It's mostly Jill, the singer, who writes the songs but a lot of it just comes from experiences we’ve been in personally on the road together. Just all the various bizarre characters that you meet – it's just quite good fodder for a song. Because it isn't really a normal thing to do with your life really, going on tour and stuff.

Man Meat is when you meet a guy…like 'oh, he's a nice piece of meat'. It's subverting the sort of lecherous thing where men latch onto females. Also just us being massive pervs!

You’re headlining the Underworld stage at Subterranean festival in Cambridge on 23 September – are you excited for that?
Yeah, it's a really good lineup actually. A lot of really different bands. I'd really like to see PINS, I know they’re headlining on the other stage. And some friends of ours called the Stone Broken.

What else is coming up for the band?
We’re actually working on a new album at the minute. It should be out early next year. Once that's out, we'll hopefully tour a lot more extensively than we have already.

We decided [for the new album] we really want to focus more on melody; melodic hooks. That was one thing we learnt from working with Luke Morley, he's all about the big choruses and the big hooks. We're trying to make these songs, not poppy, but more broad. Something that would appeal to a lot more people and open up our genre a little bit more. In the sort of way like Queens of the Stone Age and those kind of bands who are quite broad but are still rock.