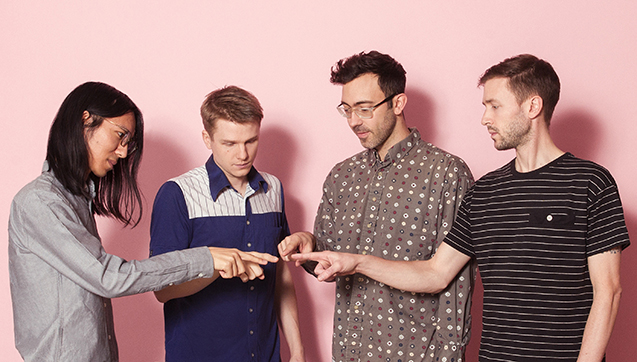 Teleman promise 'no pyrotechnics and probably no nudity' on their upcoming UK jaunt. We learn what else is in store and hear about the making of album number two...

Like Metronomy and Django Django before them, London quartet Teleman are masters of their own wonky groove, revelling in a perfect storm of synths and guitars.

From the ashes of Pete and the Pirates, Tom and Jonny Sanders, Pete Cattermoul and Hiro Amamiya have distilled motorik pop purity from a love of bare bones indie and perfect songcraft.

Their first album, 2014’s Breakfast, offered emotional wallop and whimsy in equal measure. Unrestricted by the longstanding British indie mould, they swapped guitars and skinny jeans for a looser sonic palette and a more synthetic production approach – with stunning results.

Following a studio stint with production ace Dan Carey (Bat For Lashes, All We Are, Kate Tempest), the boys are back with album number two, the muscular and massively ambitious Brilliant Sanity.

The 45-minute merry-go-round of whirling choruses and psychedelic breakdowns screams St Pepper-era Beatles, but with the Germanic economics of krautrock creeping in with a persistent metronome. Mainly recorded live in Dan's South London studio, the set reeks of live jamming and impromptu fun.

Your second album Brilliant Sanity is nearly out – can you tell us a bit more about the thinking behind it?
Well it's been two years since we released Breakfast and we were pretty keen to get more music out there. There's a mix of moods and themes on the record but we wanted to make something generally quite optimistic and upbeat. Even the darker songs have a silver lining.

How did the songs start life?
Usually as little fragments of melody. I sing these into my phone and then forget about them for a while. I'll then return to them with fresh ears and let them develop and grow naturally until they feel like a complete song. I like to allow the song to lead me, rather than the other way round. It might sound strange but I feel the song wants to tell me what happens next. In this strange zone of writing, it’s very easy and satisfying. Words come later.

How did you know when they were ready to record?
In the case of Brilliant Sanity we spent a long time in our practice room just playing through the songs and tweaking them, making little adjustments to the arrangements and structures. If something wasn't feeling good we had to work out what it was and get rid of it. We pretty much just knew when they were ready. They were ripe enough and smelled good.

What inspired the words? Do you write about your own lives?
I seem to write a lot about travelling; coming and going and not really keeping still. I think that comes from a life of touring and exploring. Sometimes words come as a stream of consciousness, and I look back (sometimes much later) and I understand what I was writing about. I write with pictures and allegory because I don't like lyrics that spell it out for you too much. At times, an element of ambiguity is appealing because the listener can choose his or her own meaning.

You worked with Dan Carey on it – how did that come about?
We did a one-off single with Dan called Strange Combinations in his studio in Streatham. We unanimously decided that we had to work with him again. It was just an instant musical gelling. That was really a blessing because it meant we didn't need to go through the process of hunting down the right producer.

How did the recording process differ from Breakfast?
I think we'd been longing to record together in a very live way ever since we formed as a band and I'd say that's the most marked difference between the two albums. Breakfast was mainly built up as a series of overdubs with very little live performance which can be a really lovely way to work; you can really experiment on a greater level with many different takes, greater control and endless options.

But I think you also lose some of the 'music' when you work like this too much. When four people who really know each other well get into a little room and really play the crap out of a song, it’s just another level of satisfaction. This is what we did as much as possible on Brilliant Sanity. This gave us a much more spontaneous feeling record.

What did Dan bring to the new record, do you think?
Dan brought a fantastic depth of textures to the record, and at the same time helped us to unify all the songs so that they really formed a collective identity as an album. His studio is a treasure trove of musical toys, but we chose quite specific synths, drum machines etc to really set the tone of the record, and then built it up around them. He also helped guiding a process which would have otherwise taken a very long time. We tracked the album in about two weeks so we didn't have time to be procrastinating over reverb lengths. We work quite slowly as a band but Dan forced us to keep things moving and make decisions more quickly. Which was a good lesson for us!

How do you think the Teleman sound has evolved since your first record?
I think we are looking more for something that is interesting rather than something that is perfect, and I think with each album we make we'll have a better idea of what our sound is! I hope it’s something that will always be open to change; I'd hate to have pinned down our sound within the first record. Cos then where do you go?

After a few years doing Pete and the Pirates you switched direction – are you getting that itch again or is Teleman still keeping you excited and interested?
There is no itching. Pete and the Pirates split cos we wanted different things, but we are all on the same page now, and already thinking about album three.

You’re going to be playing live loads throughout April and May (tour dates below) – how do you like being on the road?
It's great. There comes a point during the tour where you're really playing together without concentrating. You relax into the shows and it’s great. Touring is obviously mentally and physically challenging but we've learned to not make it even more challenging by destroying our brains and bodies too much... That's a lesson that took many years to learn.

How do you prepare for a tour of that size?
Anger management classes and a very healthy diet.

What can we expect from your live show?
Quite honestly, it's just us playing the best of our songs as best we can.... there are no pyrotechnics and probably no nudity but it’s a chance to hear our music sounding totally unique, and we love it.

What’s next for Teleman after the tour?
Album three of course. We also have quite a few festivals lined up so keep an eye out for those....

What’s the last great record you listened to?
I have Faust IV on repeat at the moment. Some lovely numbers on there. It’s very krauty buy also surprisingly pop in places.

Brilliant Sanity is out on 8 April through Moshi Moshi.