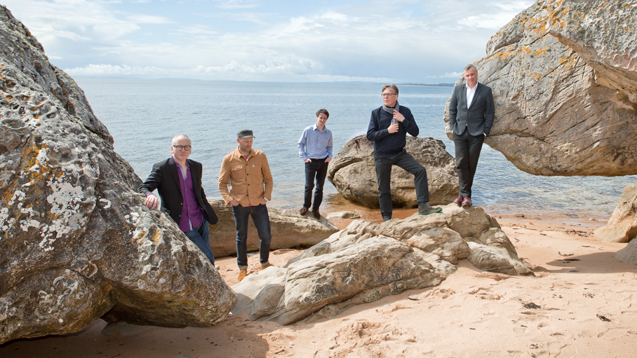 After almost 30 years together, Scotland’s Teenage Fanclub still sound more alive and in harmony than ever - we quiz the group’s Norman Blake on how to grow up and grow old gracefully…

After almost 30 years together, Scotland’s Teenage Fanclub still sound more alive and in harmony than ever.

Although definitely no longer teenagers, the band, based around the songwriting powerhouse of Norman Blake, Raymond McGinley and Gerard Love, have created an incredibly catalogue of classic indie rock.

From the brilliant early feedback-laden years of A Catholic Education and Bandwagonesque to the ace Grand Prix and more recent work of Howdy! and Shadows, they’ve managed to keep the quality high as well as maintaining the songwriting diplomacy of splitting the records equally between the three. We had the pleasure of catching up with Norman to find out more about their songwriting roots, early years and the making of their much anticipated tenth album, Here…

The first instrument I got was the bass guitar. I was probably trying to emulate Peter Hook. I got an amp too. Part of me, probably the lazy part, thought the bass would be the easiest instrument to learn. But I quickly moved onto guitar. A friend showed me a few chords and I sold the bass.

It was bands like New Order, who were part of the whole post-punk thing that said anyone can play, that started me. You don’t have to be Jaco Pastorius [bass virtuoso] to play the bass. You could be Hooky. You could make music with simple technical skill and knowledge.

Who inspired you to start writing your own songs?

A similar attitude - in the past you needed to get a deal, then punk rock happened, and all these indie labels popped up, people were self-producing records. The first thing we did as Teenage Fanclub was make an album. We didn’t demo. We were very conscious that people were demoing and trying to get deals with big labels. But we wanted to just record some songs with the limited amount of money we had and see if we could get anyone to release it. Luckily we did. The recording is pretty rudimentary, it was less than 500 quid for the whole album. It was 27 and a half years ago but even then, it was still a cheap record.

How did you meet and get Teenage Fanclub together?

Well there was a club in Glasgow called Splash One which was run by Bobby Gillespie from Primal Scream. He’s a friend of mine who I’ve known for almost 30 years. Bobby and the Scream would run this club, named after a 13th Floor Elevators song. They played great, eclectic music there, lots of garage rock, sixties and punk, all sorts. They put on bands too, acts like Felt, the Mary Chain, Sonic Youth, Pastels, Primal Scream, so this group of people formed around the club. It just so happened Raymond used to go too. His then girlfriend, now wife introduced me, then we started a band called the Boy Hairdressers. It was all through the club night.

So it was those sort of bands you were all into?

Yes although they were kind of peers in a way. People like Felt and Sonic Youth we really loved. We were also into Arthur Lee and Love, they really influenced us. I remember with the first album we listened to the Stones album, Exile on Main Street a lot too. They were a big influence, we loved the recording.

Three band members are songwriters - how does that work? And how has it evolved over the years?

Well the three of us have an equal amount of songs on each album. But we’ve always worked like this since we set out. We usually end up at the studio with song ideas which generally aren’t finished so no lyrics. But we’ll set up as a live band and whoever has written the song, will play the song through and oversee it in a way. People will be allowed to play what they want and we’ll put down a backing track. Then the writer will sing a melody but without lyrics at this point. We’ll do this backing track, and do this for all the other songs too. Then we’ll do the vocals, and keep writing the vocals as we record – so in some ways we’re influencing each other’s lyrics as we make it. It helps to make the albums more cohesive in terms of lyrical content as there are similar themes with each one.

Every group of individuals has a different dynamic but this one just happens to be ours. If there would be one person different in the line up, then the process would change.

How does it feel being together for so many years?

I suppose it’s unusual, there aren’t many bands who’ve grown old like this. It still feels natural though, and if we were going through the motions, we’d not be continuing. We want to make sure all our music is great. We’ll go on as long we feel that we’ve got something to offer. We wouldn’t enjoy touring unless we had new music and a record to play.

What were you hoping to achieve with the new record?

We never have much of a plan, we always kind of make it up as we go along. The main thing is to make sure we do something up to standard, and, after ten albums, there’s a kind of legacy that we want to preserve. We’ve always worked this way. It’s a really simple process for us. We don’t plan much ahead. We’re still lucky enough that this is something we can do for a living. It means we can do it at our pace.

What keeps you inspired?

It’s looking at music and songwriting as a craft, and one you can improve, no matter how long you’ve been doing it or how old you are. Some people think they’re absolutely brilliant at it but I’ve never been one. I always think there’s something you can learn and do better. Between albums, we’ve all done other music with other songwriters. I made a record with Euros Childs, one with Jad Fair - doing these things exposes you to new ways of working. You take those things, and maybe incorporate them even subconsciously. The trick is not to force it. You need to feel it.

Here will be released 9 September on PeMa via Republic Of Music. Catch the band out on tour over September.