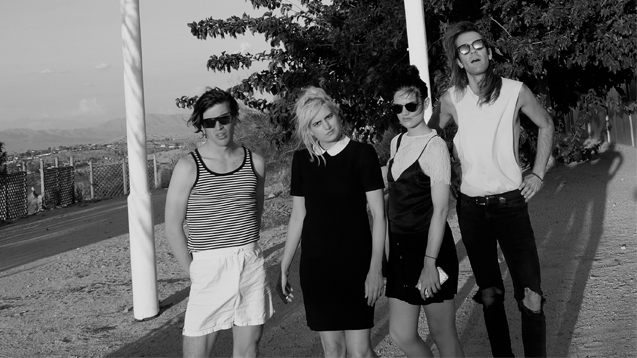 ‘It’s felt like we’ve had our hearts broken since Brexit’: DIY London punks TEAR on their new record and why we should only be writing protest songs from now on…

After stints in various outfits, the group inked a deal with Tim Burgess' label O Genesis Recordings in 2015 and have been tearing up small venues and festival stages ever since.

VINYL01 is their debut mini LP, a collection of sorts of their first EPs and the perfect introduction to their incendiary lo-fi rock.

Recorded in two parts; one with Tim Burgess and Jim Spencer at The Charlatans' Big Mushroom studio in Cheshire, and the other at Bark Studios with Victoria Freund (Cajun Dance Party), the release pre-empts a busy summer of live gigs and festival shows… we meet Camille to find out why the only songs that feel relevant in the current climate are protest ones…

Who or what inspired you to start writing your own music?

I started writing songs when I was little so I don’t really know, I remember writing ridiculous pop punk songs about school but then I’ve also got loads of diaries full of moody dark lyrics from when I was 12 years old too.

How did TEAR start life?

Ben and I grew up on the same street, I’ve always written songs and he suggested we play music together. We met Jed in a pub in Sheffield and he just kind of joined the band then and there.

Are there any artists or records that particularly inspired the band?

I love the PJ Harvey 4 track demos record; Hardly Wait is so good and really simple, I think that's definitely inspired some of our writing

Your forthcoming debut mini-album is out via O Genesis - how did you hook up with the label?

Tim from O Genesis heard some of the demos I did a while ago and wanted to produce some recording so we went up to the Charlatans' Big Mushroom Studio to record our first EP.

What is the record about? Are there any themes or ideas that it explores?

It’s sort of a compilation record of two EPs, they're both largely about loss and grief but there's also some songs that I wrote in LA which are more about the vibe there and how it makes me feel.

How and where did you make it?

We recorded some of it at Bark Studios and some at Big Mushroom in Cheshire with Tim Burgess and Jim Spencer.

The political system both here and in the US seems to be in a fractious state – how do these goings on influence you and your music?

I think it’s felt like we’ve had our hearts broken since the Brexit vote, it’s weird for us as we are surrounded by open minded people and we live in a city with a massive mix of culture that we find inspiring but I think there are some unscrupulous people that prey on people’s fears creating all this division. We’ve not had a chance to record since the whole America situation but the general weirdness of the world definitely seeps into the music. You wake up every day to more bad news and it feels like we should only be writing protest songs from now on.

Have you a favourite venue to play?

Probably the Moth Club in London. We’re doing our vinyl launch there and we’ve played a few times before, it's got the most amazing glittery stage.

My advice would be just keep on doing your thing and don’t worry too much.

What is happening over the rest of 2017 for you?

Playing some festivals over the summer, Kendal Calling has just been announced!

Listen to Careless Again below.