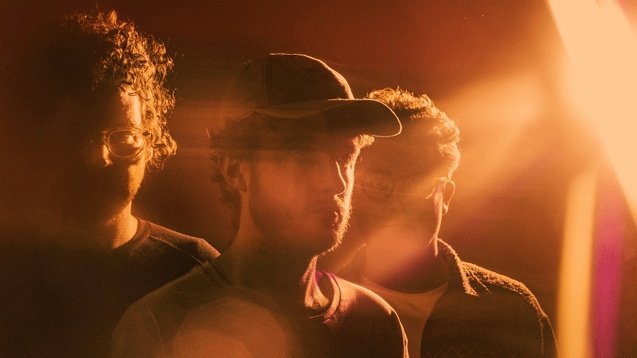 'It felt weird putting my lips round it and blowing through it in front of people!' Szun Waves' Jack Wyllie on overcoming his saxophone complex and what's in store for LP number two...

Astral wayfarers Szun Waves have been gently fanning the flames of a cosmic jazz revival since 2013.

Like the opening sequence to a lost sci-fi B-movie, their unanchored blend of exotica, jazz and electronics snatches your body and mind, transporting you away to another universe.

Veering between either gaseous or densely psychedelic, they hold a mirror up to the great improvisors Sun Ra, Pharoah Sanders and Alice Coltrane, reflecting them back through a 21st century prism.

Comprised of electronic wiz Luke Abbott, Portico Quartet’s Jack Wyllie (top, middle) and Laurence Pike of PVT, their debut album At Sacred Walls back in 2016 introduced the world to their interplanetary sounds.

Now back with their follow-up, New Hymn To Freedom, the trio have pushed the boundaries even further, throwing more layers of ambient, kosmische and psych into the mix.

As they prepare for the release (the album lands tomorrow – 31 August), we chat to Jack about the trio’s beginnings, how he first landed on his shimmering sax sound and what’s in store for Szun Waves’ upcoming 3D audiovisual live shows…

I’m in Hackney, in Clapton. But I was based in Senegal for about six months of the last year. I just got back a few weeks ago; my girlfriend is doing her PhD out there. So, I've been back and forth quite a bit.

Were you making any music while you were over there?

Yes, I did quite a bit, actually. I've been working with a few people, but mostly a couple of drummers. We’ve been recording the fast rhythms they have over there, which is a type of music called Mbalax. It’s very rhythmically dense, super-fast, 180, 190 bpm... It's extremely popular in Senegal and not so much elsewhere in West Africa or the world.

I've been recording some of those rhythms and playing around with them, putting ambienty synth parts in. I guess it's like an ambient record, but with these really dense rhythms. It's been fun!

Sounds great, we look forward to hearing it...

I don't know if I'll even put it out. It's half-formed at the moment, so we'll see.

What was like to play against rhythms that are so fast and complicated?

I’ve treated the recordings more like productions almost. The drumming is live, but it’s quite low in the mix so it’s actually quite an ambient record. And I'm only playing a little bit of sax on it. The saxophone is quite distant, and it's got loads of reverb on it so you can't really hear it.

Your second Szun Waves record is about to land… has the idea behind the band changed much since your first LP At Sacred Walls?

We all have other things on the go so, obviously, we bring new stuff that we've learned to the group. But I think, between us, Szun Waves has evolved as into its own form as well. The sound that we started making has changed incrementally over the course of the time we've been touring it.

It's got its own way of evolving rather than there being any sudden changes or someone bringing something dramatically new to the party. So, it just keeps on moving a little bit every time.

You use a lot of effects pedals when recording your saxophone playing – why is that?

I think it came out of being quite uncomfortable playing the saxophone. I felt that the instrument is so idiomatic, it's so jazz, and it's got all these heavy connotations to it, especially in its dry form. I just found it really cheesy. If you search 'jazz' in Google Images, you get all these flaming saxophones (laughs). I thought, ‘Is that really me?’

As well, I was getting more into electronic music - I wasn't listening to much jazz or even saxophone music. So I started using electronics as a way of changing the sound or extending it and covering up the sound of the sax a bit, so it starts sounding like something else.

Do you still feel a bit uncomfortable playing sax?

No, I feel much more comfortable with the saxophone as an instrument now. I've got back into it more and, I guess, jazz more broadly. But yes, there was definitely a period where I was like, ‘What is this big gold metal object hanging round my neck?’ It felt quite weird playing it, putting my lips round it and blowing through it in front of loads of people. It was a weird complex I had for a while, but I’ve got over that now (laughs).

You’ve got a 3D audiovisual extravaganza tonight (30 August) to celebrate the release of Szun Waves’ New Hymn to Freedom – what’s in store for that?

We've been working with this guy, Sam Wiehl. He made a really beautiful video for us so we're working with him again on the visual aspect for the show. It's really exciting. We’re trying it out at the album launch then plan to take it round the country at all the other gigs as well. It'll probably change its form depending on the room, but we'll be using a couple of projectors.

You’ve also got some live dates with the Portico Quartet in the diary this autumn – is that going to keep you busy for the rest of the year?

Yes, we’re mainly writing this new Portico Quartet record that's starting to come together, and we're going to record in December this year.

And then I do this project with a guy called Adrian Corker as well, which is an improvised thing. We meet up occasionally and record what we do, and I think we're going to put out another little EP soon.

And finally, what’s the last great record you heard and what was amazing about it?

I really enjoyed Jon Hassell's new record, Listening to Pictures. I thought that was wicked. I love Jon Hassell, those beautiful spaces that his music puts you in. It’s almost like creating some lovely lighting that you can just sit in. Last night, I was listening to a really nice record called Turkish Ladies: Female Singers from Turkey, 1974 to 1988. There were loads of amazing tunes on it.