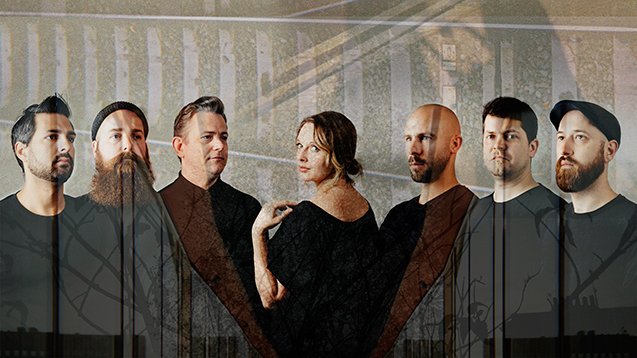 'Bryson Tiller sampling All Yours has definitely brought around a new younger fan base and street cred for us' - the genre-defying Leeds band on why rappers love their sound plus going DIY for their new album...

Genre-defying Leeds collective Submotion Orchestra have been melding their textured jazz and soul fused electronica since 2009, attracting fans far and wide for their kaleidoscopic sonics.

'Bryson Tiller sampling All Yours in his song Right My Wrongs has definitely brought around a new younger fan base and street cred for us,' they tell M, referring to the American singer and rapper's debut album which featured heavyweight producer Timbaland and introduced them to a new audience.

While the band's last two albums were released on Ninja Tune, their fifth album, Kites, sees them take the reins, releasing on their own imprint SMO Recordings.

It's an approach that has given them full creative control, returning to their original smoky jazz sound after their previous experiments with programmed electronica.


You’ve said Kites marks a return to how you made your early records – how so? Was it important to revisit old ways of working?

The way we'd made our earliest stuff was by either jamming together in a room or bringing a riff or theme and seeing where we developed it once we started playing together. We developed and changed over time and our last album Colour Theory was basically the total opposite. So when we started planning the new record we all missed that initial way of playing together – I guess as you get older, you get more nostalgic for what came before too. But you also need to mix up the way you write as time goes along, especially in a seven-piece band.

You each took photos to form the themes of the album. What sort of photos did you take, did you find a common thread? And how did it impact the writing?

We took photographs of anything we wanted really. We each used disposable cameras so as always, a lot of the pictures didn’t come out. But from the ones that did, 10 of the most interesting/atmospheric ones were chosen ranging from a bird flying solo in the sky, train tracks, to a picture of a girl walking without shoes after what looks like a night on the town.

In the two years since our last album, there have been a number of significant life events for us, including new life and family death and so we felt it was important to use these events as inspiration for the album. It impacted the album hopefully in a positive light, as it’s a process we’ve never tried before.

I (Ruby) was given a picture and a set of lyrics written by Tommy and then formed my melody ideas around that, which was then passed on to Taz (piano) who worked chords around the lyrics and melodies. It was an interesting process, and it either could have really worked or really not worked. Luckily people seem to be enjoying the outcome.

What were you all listening to during writing and recording? Was there anything you wanted to emulate?

We all listen to such a vast array of different music on a daily basis, but with this album I think it was more of a way of allowing the music to be what it wanted to be rather than to put boundaries and labels on it. It allowed us to each play to our strengths and not get too caught up with trying to be something. We’ve definitely focused too much on that in the past I think.

You’re releasing this on your own imprint. Have you learnt anything, going the DIY route?

We're really enjoying doing it ourselves. We obviously have a head start since we've built up a fan base and following, but being able to decide ourselves what to put out – and how to put it out – without needing to worry about how other people will react is pretty refreshing. It's tough enough figuring it out between the seven of us, let alone adding labels.

You’ve been sampled by Young Jeezy and Bryson Tiller. How did that come about and has that opened up your audience in any way/ brought about new opportunities?

I don’t really know how it came about, we seem to be quite popular with American rappers and producers. Araab Musik and Fabolous also sampled our song Perfection on a track called Beauty. I think the sections they chose are minus drums so quite easy to sample.

Bryson Tiller sampling All Yours in his song Right My Wrongs has definitely brought around a new younger fan base and street cred for us. People who were interested in that song reached out to find out the sample and got directed to us and obviously more people hearing the band's named across the pond in the US is a good thing. I (Ruby) performed the song live with Bryson Tiller at Wireless Festival in London in 2016, which was fun!

What do you make of the current UK jazz scene?

The UK jazz scene has always been amazing and a massive source of inspiration to us – because there are such a massive amount of amazing musicians and projects and people who work insanely hard for their music.

It's often going to be a struggle doing any kind of jazz, but I think that as the general attitude of jazz has moved towards being fully conversant with all other forms of music – and not sticking its head in the sand about what's happening around it – then people aren't going to view it as something that's harder or weirder, but something that constantly pushes forward and seeks new places to move towards. Which is really what the best jazz has always been about.

What one piece of advice would you give to anyone starting out? Was there anything you did early on, in order to get noticed?

I think any band that does well has a degree of luck – we were certainly in the right place at the right time to do a dubstep influenced live band thing.

The main thing that helped our following grow was a residency in a small bar in the student area of Leeds. We just turned up every Monday night for nearly a year for beer and curry, and played what we'd been working on. Finding a little spot like that is amazing – though definitely easier in a smaller place than London. And also festivals really helped grow our fan base. We did a lot with the Chai Wallahs guys in our first couple of years which was a great way to play across the country and get people talking about who we were.

In terms of advice: just make sure you love what you're doing and be committed to it. Don't let stuff get you down because most people are expected now to do all the ground work and hard work themselves, and that's a hard slog. Many people will try to give advice, change what you do, try to make you go down a particular road, so make sure you want to be doing the sort of music that you know you want to make and don't get distracted from it.

We're touring at the moment over the UK and Europe, then festivals in the summer. The main thing will really be thinking about next year – it'll be our ten year anniversary so there'll be something special planned.

Kites is out now.