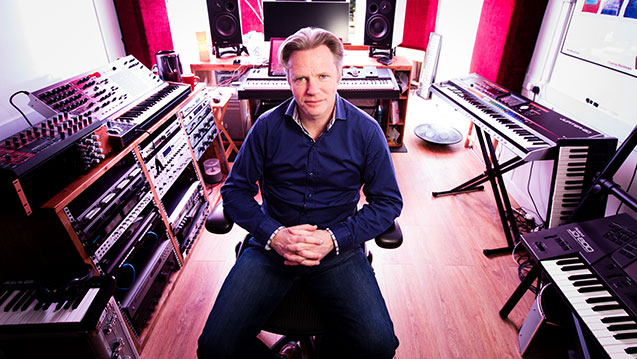 'Try to think beyond the pre-existing norms of the medium': celebrated videogame, TV and filmscore composer Stephen Baysted on getting a foothold in the industry...

Film, TV and games composer Stephen Baysted has built a renowned career on the things he loves the most – music, multimedia and motorsport.

Over the last two decades he’s been immersed in the rip-roaring world of racing games, scoring soundtracks to award-winning titles such as Project CARS and EA's Need for Speed series.

Here, he tells us about his love of videogames and racing, the making of his score for latest title Project CARS 2 and how he first found his footing in the composing world…

How did you find your way into composing?

I always remember writing songs as a teenager either for bands (playing keyboards) or just simply noodling around on our upright piano. I also had a Commodore 64 and experimented with what people now call Chiptune music these days.  It was only when I went to university (Southampton) to read music that I began to compose in a more structured and systematic way and indeed had access to a studio – albeit a fairly basic one by today’s standards. It was at that time (early nineties) that I really began to be fascinated by film music.

What have been your biggest influences along the way?

This is such a difficult question! And the answer is complicated. Throughout my formative years at Wandsworth School, I was extremely fortunate to have been able to sing treble and then bass in the choir, performing in all the major venues in London and many overseas, and so I was very much immersed in the English and European choral tradition as result.

I was also lucky enough to play clarinet and bass clarinet in the London Schools Symphony Orchestra and London Youth Sinfonietta, and so I have a really profound love of orchestral music. As a teenager in the eighties, I was into jazz funk bands like Level 42, and later acid jazz, all mixed in with Bowie, The Eagles, The Who, Clapton, Hendrix and various prog rock acts from the seventies. In terms of film music specifically, there are so many composers that I admire and I would count as having been influential: John Williams, Alan Silvestri, John Barry, Hans Zimmer, Howard Shore, James Newton Howard, James Horner, Patrick Doyle, Rachel Portman, Harry Gregson-Williams, and so many more.

How and why did you get into the gaming world?

Honestly, pretty much by accident!  I have always been a serious petrol-head, an avid motorsport fan and I’ll admit to playing a lot of racing games growing up. When dial-up internet became stable enough in the very late nineties, I raced online with a wide circle of friends from various corners of the globe. Way back in 2000/2001 as a collective we ‘modded’ an existing game with new circuits, new cars, new career modes and, for my part, new sounds and new music. We released it non-commercially and it made some fairly significant waves with a fair few hundred thousand players worldwide. To cut a very long story short, we ended up forming a limited company headed up by Ian Bell, obtaining significant funding and eventually releasing our first commercial racing game (GTR: FIA Racing Simulation) in 2004.  Since then I’ve written the music and designed sound 17 games with many of the same people.

How does writing for games differ from other types of media you score?

In many respects the end result – what is revealed to the audience – is ostensibly the same: the music’s function is to heighten the drama and enhance the on-screen action; and whether it’s film, TV or a game, music appears to follow the narrative arc very closely.

The musical language is, of course, also often indistinguishable across all media; most of the major influences come from cinema. However, in games when you begin to dig below the surface, the underlying mechanisms are often radically different to the linear models used in TV and film. In games, we tend to talk about ‘adaptive’ or ‘interactive’ music; music that is often composed in layered loops and in many levels of intensity that can be triggered at various significant points during gameplay.

So consequently, as a composer, you need to approach a game score a little differently from an architectural perspective. And because music is also an ‘asset’ that needs to be ‘implemented’ within the game engine, composers are frequently required to work closely with audio directors and audio programmers. This adds another layer of complexity.

The profound sense of immersion you get from playing the latest generation of games and the extraordinary possibilities and unique experiences afforded by new and developing technologies such as virtual reality. It’s an exciting time to be involved in games.

What was the thinking behind your music to Project CARS 2?

I have long been fascinated about what drives (no pun intended) racing drivers; and indeed what differentiates them from us mere mortals. Why is it that throughout the history of motorsport, they have risked and (in many cases) lost their lives in the pursuit of glory and that perfect lap? Their state of mind, at least at first blush, seems so far removed from mine, that I really wanted in this game to explore their motivations and try to express that in musical terms.

As both a motorsport fan and a sound designer making racing games, I’ve been to a lot of events over the years and recorded racing cars - and one thing that strikes you is that they are shockingly brutal machines – unimaginably loud and ferocious. These brave men and women strap themselves in and set about defying physics and pushing their own limits and often exceeding them. So, as a consequence, the score has two personalities: the heroic, epic, expansive, aggressive, determined, and ferocious; and then there are more introspective, reflective, emotional and contemplative elements.

I wanted to weave in real testimony from drivers about how they actually prepare for combat and what they really feel whilst competing and so, in addition to contextual atmospheric elements from motorsport events, we have frank voiceover commentary from a series of interviews with Ben Collins, the Stig on Top Gear.

Can you tell us about the scoring process?

It began about two years before game release. The bulk of the score was composed in a compressed period from mid-January to mid-April this year. It’s the best way to do it of course, but it does have its pressures, especially when studio and orchestral bookings need to be made months in advance, and one’s game programmers are still coding! I’d compose each piece and make a full orchestral mock-up for approval.  These mock-ups were then added to work-in-progress game builds.

In the final stages, I worked closely with Andy Brown, the director of the London Metropolitan Orchestra, my orchestrator Simon Whiteside and my engineer and producer Jake Jackson. It’s very much a team sport and being able to work in one of the best studios in the world (Air Lyndhurst) with many of the most talented players is an absolute privilege. I also worked closely with my wife, mezzo soprano and pianist, Susan Legg; she’s sung and played on numerous game scores and films that I’ve worked on over the years, and her voice and piano playing features on the score.

Do you have any advice for upcoming games composers?

Never give up on your hopes and dreams; it’s a tough industry to be involved in and to break into these days. Use your experience as game players and try to think beyond the pre-existing norms of the medium. Explore opportunities in sound design to get a foot in the door as there are many more jobs in audio than there are in music, and it is perfectly possible to move across at a later point.