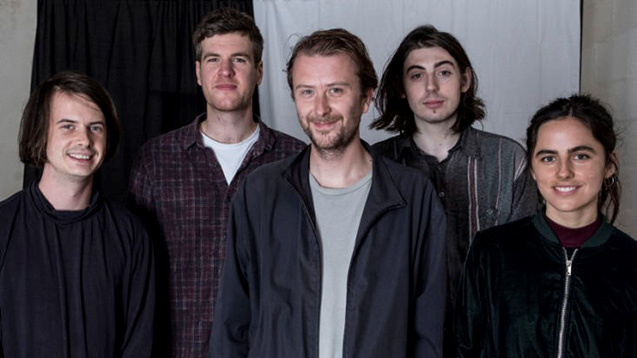 We chat to the band's drummer Chris about keeping up part-time jobs, recording with Edwyn Collins and playing guerrilla gigs on the streets of Glasgow...

Looking for your next fix of bright, jangly indie underpinned with progressive political comment? Glasgow's Spinning Coin might just be your ticket...

Over the space of three years, the five-piece have clocked up two singles and endless gigs, including supports slots with beloved guitar pop stalwarts Teenage Fanclub.

Now, preparing for the release of their debut album Permo in November, the band are set to take their fanbase further with supports for Girl Ray and Dinosaur Jr.

Recorded with Edwyn Collins at his AED Studios and at Green Door Studio with Stu Evans, Permo spans 14 tracks of beautifully coarse guitar pop, tackling themes such as privilege, government corruption and finding your place in the world.

Ahead of its release, we chat to drummer Chris about keeping up part-time jobs, recording with Edwyn and playing guerrilla gigs on the streets of Glasgow...

How do you feel now Permo is nearly out there in the world?

It’s exciting. We have been playing some of the songs since the start of the band and they mean a lot to us. We’ve worked hard on it, hopefully people get into it and enjoy listening at home or wherever feels right.

It was really great to work with Edwyn. His studio is really brilliant and Helmsdale is beautiful. I think we were all a bit overwhelmed with how great the setup was. It was really fun hanging out with him, his partner Grace and David who engineered.

I got into the Orange Juice Glasgow School compilation when it came out. After that I started connecting the dots and realized Edwyn was producing bands with all his vintage equipment he’d collected. I really liked Girl Like You when I was wee too. I remember it featured on Neighbours quite a bit and I was watching that daily at the time.

You’ve supported the likes of Teenage Fanclub. Did you learn anything from them?

Teenage Fanclub and their crew are lovely and a pleasure to tour with. It’s a really great thing to have everyone greeting you with big smiles when you’ve been travelling a lot. It’s nice to be nice: a smile costs nothing, it makes all the difference. It was great to see them play 14 times or however many gigs it was. They have loads of great songs and swap about singing duties. It was cool to see that working so well ‘cause we do that too.

How do you write together as a band?

Sean and Jack formed the group because they liked each other’s music. We jam out parts at practice and form bits and pieces but we can just as easily learn what Sean, Jack or Cal has written previously. We don’t have strict rules. We are all collaborators in this band and in other bands – I think that’s just part of playing music.

How important is it that your music reflects what’s going on in the world?

We all make music because we are really into it and it makes us happy. I think we are privileged to be able to do that. We work part-time so we can be in bands. It makes you a bit frugal not having lots of disposable income and makes you realise it’s not a necessity. People can go a bit mad with money, I think that’s pretty obvious. It seems like it's inevitable that music will reflect what’s going on in the world.

What were you listening to growing up??

My dad would play stuff in the car like ELO, the Beatles anthology and a Tiffany tape with I think We’re Alone Now on it which was pretty good. My mum would blast The Phantom of the Opera soundtrack around the house (I didn’t really like that). We were in a car crash with a Tina Turner Best Of playing in the background when I was young, that was pretty memorable.

My brother got into Nirvana and had some tapes he played me which I thought was really exciting. I had just started high school and was getting to play bass and a drum kit for the first time, so I guess that was the first inspiration to play music. That’s when I started listening to more punk or post-punk stuff. The first gig I went around the same time at a youth centre. They’d hired in a big PA and I thought it was amazing that you were allowed to make so much noise.

Can you tell us about signing with Geographic? Were you ever tempted to go down the major label route?

We started talking to Stephen Pastel about the band when we were selling our first cassette in his record shop (Monorail). He told us he liked the tape and asked if we wanted to do a single on Geographic and it went from there. It’s nice we have people in Glasgow working with us on our releases. I don’t think any of us have had any contact with major labels.

What do you think about the current landscape for emerging artists? Is there an independent scene in Glasgow?

I think any time is good to start making music. If you find a scene it can be easier, but if not, you could stumble on some other crazy happenings that could be just as much fun. Glasgow’s great for music. I think The Old Hairdressers is a really good venue and also its related venues, Mono and Stereo. You’ve kinda gotta play in a pub or club though which is a shame.

Some of us used to put on gigs in the street with a generator to lose the hire fees and break up the pub vibes a bit. That was a bit scary at times though ‘cause we ended up attracting street drunks telling people to play Oasis and asking for a shot of the instruments, which is fine but a bit wild when you’re trying to put on touring bands. The police only seemed to show up when we were packing up, which was good.

What advice would you give to bands starting out? Was there anything you consciously did to get noticed?

We played as many gigs as we could. Started recording pretty early on and put out a cassette on Winning Sperm Party. We had already been in bands so had a lot of contacts, but we managed to meet a lot of new people by playing lots.

You received PRS Foundation funding. How has that helped you and what did you use the money for?

We went to SXSW and played gigs, watched loads of bands and met lots of nice people. Meeting people from Domino in the US was really useful and helped us get some ideas together for going back over and touring when the album comes out.


Permo is out on 10 November via Geographic. Pre order through Dom Mart or Digital.
Photo credit: Brian Sweeney