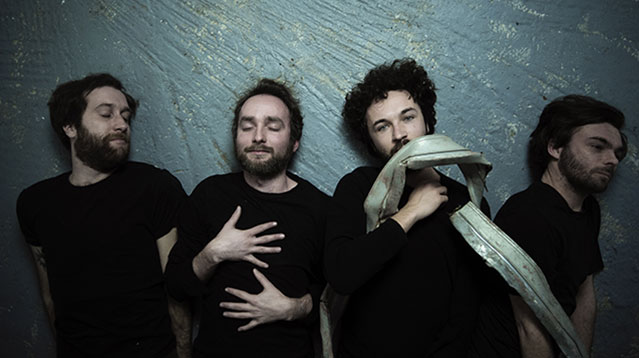 Bristol based noise-rock outfit Spectres on their gigs with Ride this week and what they've got up their sleeves for the rest of 2017...

The sonic equivalent of a rip tide, their guitars and vocals cut through the breaking waves of drone to douse your ears in warm fuzz and analogue feedback.

Cut from the same cloth as Sonic Youth, Mogwai and Earth, they’ve been fiercely independent their whole careers, helming the Howling Owl label and curating sublime festivals and fanzines of the weird and wonderful.

Now signed to the sacrosanct Sonic Cathedral label, and with ace second LP Condition under their belts, they’ve been turning even more people on to their sound.

Probably their biggest fan so far is Ride’s Andy Bell, who invited Spectres to warm up for their Manchester International Festival and Oxford gigs this week.

With some more Spectres' curated Dissolve events pencilled in for later this year, and the band already contemplating album number three, we chat to voicebox and guitarist Joe Hatt to learn more about what's in store…

How do you feel about the gigs with Ride?
Really, really happy. It’s been on the cards for a year or two, since they’ve come back, because Andy from the band did a remix for us. He’s come to see us quite a few times when we play in London. So, we’ve been on their radar a bit.

Are Ride one of those bands you’ve been into forever?
Yes, definitely! All of us in the band were into their first EPs and albums. And it all still sounds just as urgent now as it did then. I'm looking forward to hearing the new record as well.

You released the Slug Life tour doc not that long ago – what’s your relationship with tour life? Are there bits you dread?
It’s a tough one. We’re still very much a DIY, back of the van, sleeping on floors, kind of band. Not really out of choice but that’s where we’re at, really. The tour we did in April and May was our biggest yet. We ended up doing about 33 dates in 36 nights, I think. It was a slog, but we just about survived it!

What single thing might improve the experience for everyone, do you think?
I don't know, really. It’s tricky for me because I work full-time whilst being on the road. I’m a booking agent so I can never really stop. So, for me, if we could pause time for six hours a day so I could work, that would be great, but that’s obviously never going to happen.

In Europe, nine times out of 10, you’re going to get somewhere to stay, even if it’s in the promoter’s house or in the venue. It’s always taken care of. Whereas the UK, it’s nine times out of 10 that you have to sort stuff out yourselves. It’s telling that we never have to sleep in the van when we play in Europe but we do quite a lot when we’re in the UK. The culture’s very different from here.

What was the thinking behind your latest record?
I guess it’s that classic thing of the first record being a collection of songs you’ve built up over the years. Whereas for this one, we were obviously starting from scratch. We had the idea of going away somewhere to try and write a record, by renting a house for a week with all our equipment, but we actually ended up playing so many shows after the first record, and also with our work commitments, we couldn't do that.

So we just set ourselves a date six months ahead to have it finished. Suddenly, about a month before the deadline, we realised we barely had half an album!

Ooooops
Ha yeh, we had to challenge ourselves to write a song a week, basically. Even when we went in to record it, it was unfinished! It ended up sounding as planned as we wanted to, but it was actually very spontaneous, which is quite odd.

What’s getting you excited musically at the moment? Is there any sound or artist you’re particularly into?
Yes. We’re lucky enough to live in Bristol, where we can hear just about every genre going. I'm really into the more heavy electronic side of things.

When we play the UK we always try to bring a few bands along with us, especially Giant Swan who are a two-piece noise act. Then there’s a really good collective called Young Echo in Bristol, who’ve got an amazing collection of artists, like Vessel and Ossia, Kahn & Neek, and people like that.

Why do you think Bristol’s got so many exciting new bands?
I think it’s still relatively cheap. We moved here about six years ago as a band, because we were from North Devon where there was absolutely nothing for us. It took a little while, but after about six months we started meeting other like-minded people. I don’t know, it sounds cheesy, but there seems to be freedom here, because as I said, it is still quite cheap to live you get a lot of people who can work part-time and invest a lot of time in their music.

What’s keeping you busy for the rest of the year?
Band-wise, we’re putting on shows throughout the year. We’re doing these events called Dissolve, which are like mini festivals, I guess. We’re going to try and do another couple of those later on this year, hopefully.

Then, we need to get our act together and get some more videos done. We always try to have strong videos to go with our music. After that we’ll start working on some new music.

https://www.facebook.com/wearespectres
Features
Back to top