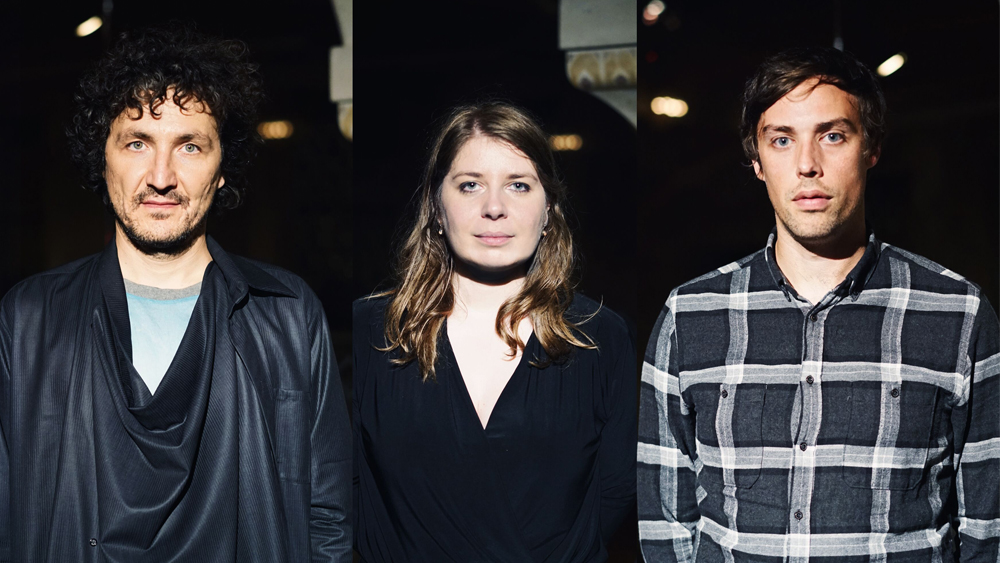 ‘The best musical projects are where the individuals involved are pulling each other in different directions, and challenging each other’s weak points or unconscious tendencies,’ says Solo Collective’s Sebastian Reynolds.

‘The best musical projects are where the individuals involved are pulling each other in different directions, and challenging each other’s weak points or unconscious tendencies,’ says Solo Collective’s Sebastian Reynolds.

The Oxford-based composer, producer and multi-instrumentalist formed Solo Collective with cellist and composer Anne Muller and violinist and producer Alex Stolze in 2016.

Over the next two years the trio worked on the record Solo Collective One, which was comprised of two tracks from each artist; one a live performance at Roter Salon in Berlin and the other a studio production.

Following the record’s release the group toured the UK and Germany, which along with studio sessions produced the basis of Solo Collective Two, a record of Sebastian’s compositions.

The trio have drawn on their rich individual experience to create a unique contribution to the neo-classical landscape.

Sebastian has long been at the centre of the UK’s experimental music scene, leading the ensembles Keyboard Choir and Braindead Collective.

Here we chat to Sebastian about the trio’s latest release, their process and the UK’s independent music scene…

What’s the thinking behind Solo Collective Part Two?
During the touring for Solo Collective Part One we recorded some of the gigs, and had some studio sessions together, in quite an open, exploratory way. We ended up with recordings of my unreleased material, and it seemed to work to release these tracks together, as a follow on from Part One, another mixture of live and studio recordings but this time focussed on my material.

How do think your sound has evolved since part one?
Anne and Alex are string players, cello and violin respectively, and Part One was comprised of 2 tracks from each artist, so the release ended up being quite string heavy. As this record is a focus on my material and I’m a pianist/keyboard player there’s a lot more piano, both in terms of pieces composed for piano (One Year On and For Matthew), and processed piano (Mildenhall and For Hazel). The strings are still integral, but in Part Two they provide accompaniment to the piano based compositions. Also, my production aesthetic is intentionally quite raw, whereas Alex’s beats production on Part One is much crisper and refined, although Alex mixed most of Part Two so it’s a good compromise between my lo-fi sound and a more refined approach to the final mixes.

What originally drew the three of you together?
We met through mutual friends in Berlin when I was spending time there, I started working with Anne on what ended up being the version of Holy Island that’s on Part One, and we somehow came up with the idea of putting on a concert at the Roter Salon in Berlin and calling the event Solo Collective, to make a point about the evening being about three solo artists coming together to collaborate. I think we have individual, but complimentary styles and approaches and we collectively and individually benefit from working together in this way.

You all come from quite diverse backgrounds, how has that fed into Solo Collective?
Anne and Alex are highly trained classical musicians, and I am largely self-taught, and we have our own approaches to composition and production, I’ve often found that the best musical projects are where the individuals involved are pulling each other in different directions, and challenging each other’s weak points or unconscious tendencies. This is definitely the case with Solo Collective.

You’ve talked about blurring the line between instrumental live performance and digital processing, can you tell us more about that?
One of my favourite producers is Susumu Yokota, who was a master at blurring the lines between electronics, samples and unusual traditional instruments. The example that occurs to me is when Stanley Kubrick made Eyes Wide Shut he mocked up parts of London to appear as New York, largely because he refused to fly so it was out of necessity, but I think this approach of erasing or blurring the original source of the material, be it film, or in my case audio, creates a strange, dreamlike effect.

I think that we unconsciously make assumptions about what we’re listening to or watching, and if those assumptions don’t function in terms of what we’re experiencing, it causes an interesting cognitive dissonance. For example, on the track For Hazel, the finale string parts were improvised by Anne and Alex under my direction live in the studio, and I collated and processed them to give them the sound of mellotron strings, which contrasts with the natural assumption that they are synthesised strings particularly in the context of an album that’s very heavy on electronics and studio atmospherics.

How do Solo Collective tracks start life?
I have a very large body of as yet unreleased work, stretching back at least 20 years. And I am always creating, so I had a lot of material to draw from. For Part Two it was material that we had already been performing together, plus the Mildenhall track which I created many years ago and it just seemed to fit as an interval piece on the album.

In the case of working on my pieces, I play Anne and Alex the piano part, and we’ll gradually develop their arrangements together in the studio. Ripeness Is All is a directed, mood improvisation, responding to the content of the monologue. For Hazel is a collage of processed found sounds, snippets of audio taken from a live performance of the track, and some studio improvisations by Anne and Alex, later processed and worked into the final version.

How would you describe the music you make to the uninitiated?
For Solo Collective Part Two it’s a mixture of sometimes glacial, sometimes sentimental, atmospheric piano trio and solo piano music, interspersed with dark, sometimes nightmarish electronica.

You’ve received support from PRS Foundation’s Open Fund for Music Creators, what has that backing meant to you?
It’s always an honour to be supported in one’s work, I received Open Fund for Music Creators support to develop an original score for new contemporary dance work Puzzle Creature by UK based Neon Dance, which premiered in Japan in 2018 and continues to tour the UK this Autumn. Inspired by artist / architect duo Arakawa and Madeline Gins Puzzle Creature features an immersive set design, which creates a space where performer and public co-exist. I developed a score for 8 speakers so that the sound could have a physical presence and needed to consider how the score might sit alongside audio description. It was a fascinating process that enabled me to work alongside internationally renowned artists and spend time in rural Japan as part of Echigo-Tsumari Art Triennale.

What do you make of the independent music scene in the UK at the moment – are there any particular artists or labels you’re particularly excited about?
I also play with Oxford based, Sweden born singer Julia Meijer, whose debut album, Always Awake, I’m releasing as the first release from my own PinDrop label in July. I’ve run PinDrop music PR for nearly 10 years, and starting to release records is an obvious continuation of what I’ve already been doing. I recently discovered cellist Simon McCorry, and his new album Border Land is a really beautiful and immersive record of drones and subtle electronic processing, I had the pleasure of contributing some production ideas for a couple of the tracks too. STANLÆY from Bristol plays cosmic fairytale dream folk with intricate, chamber arrangements, I really think she’s a big talent for the future. Her debut album, The Human Project, just came out.

What’s next for you?
I’ve got 2 soundtrack albums that I produced for dance productions, the aforementioned Puzzle Creature, and Mahajanaka Dance Drama, a theatrical dance show that I co-scored and co-produced in collaboration with Neon Dance and a Thai dancer Pichet Klunchun and Thai traditional musicians. Both shows are touring in the UK this Autumn, and I’m just scheduling some solo shows and maybe some more Solo Collective performances for 2020. I also have the makings of my debut solo album in the works, tentatively titled The Universe Remembers.