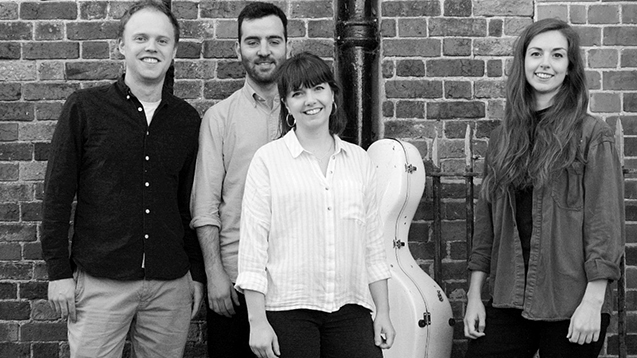 Manchester-based Solem Quartet are a dynamic group of classical musicians with a repertoire that stretches from father of the string quartet, Joseph Haydn, through to living composers such as Emily Howard. We caught up with violinist Amy...

'We grew up listening to everything from indie to folk to rap' say Solem Quartet.

The quartet are discussing their early eclectic taste, something which has no doubt contributed to their reputation as a dynamic force of classical musicians.

Formed in 2011 while studying at the University of Manchester, the group's wide-reaching repertoire stretches from father of the string quartet, Joseph Haydn, through to living composers such as Emily Howard.

Winners of the 2014 Royal Overseas League Ensemble Competition, they've held the position of quartet in residence at the University of Liverpool since 2014 and were also recently appointed ensemble in residence at Aberystwyth MusicFest.

Made up of violinists Amy Tress and William Newell, viola player Alistair Vennart and cellist Stephanie Tress, the four regularly play venues across the UK including Wigmore Hall and Holywell Music Room.

With upcoming performances including a 'lie-down' concert at Planet Tree Music Festival, we caught up with them to find out everything from playing in the dark to being mentored by renowned cellist Christoph Richter...

What were you listening to growing up and what led you into the quartet?

Between us, we grew up listening to everything from indie to folk to rap (one of us used to be a massive D12 fan, much to the rest of the quartet's amusement), but also classical to varying degrees. I guess it's ultimately that passion for classical music that led us all to take it on professionally and make it our career. We're really lucky in that the string quartet has some of the best music in the genre, and there's an enormous amount of it!

The number of Classic FM listeners aged under 35 increased by 30 percent in the last year – what do you think it is about classical that is getting people switching on?

We hadn't heard that statistic before - that's great news! I couldn't tell you what's led to that specific change, but perhaps people are gradually becoming more aware of how accessible classical music really is. Virtually every concert hall, orchestra or opera company has some kind of cheap ticketing scheme for under-35s, and arts funding tends to favour organisations or projects that can engage a wider audience. The idea of 'taking classical music out of the concert hall' has even become something of a cliché in recent years, which just goes to show the efforts that are being made to prove that classical music is for everyone.

Can you tell us about the concerts and workshops you’ve held in a number of special needs schools around Manchester?

The work we do in special needs schools is through an amazing organisation called Live Music Now. They set up workshops and concerts in schools and care homes all over the country. We introduce our instruments and play a huge range of music and encourage participants to get involved, dancing, playing percussion and so on. It's really valuable work because most of the pupils wouldn't normally have access to live music.

Manchester's a great city for classical music. The Royal Northern College of Music regularly hosts world-class chamber music concerts given by top international ensembles, and at the Bridgewater Hall you can hear the Hallé or BBC Philharmonic most nights of the week.

Manchester Camerata always gives breath-taking concerts, whether they're playing Mozart concertos, Piazzolla tangos or their own arrangements of classic pop songs. There are also loads of young composers in Manchester so the contemporary classical scene is really vibrant – you can end up going to some pretty eclectic gigs!

You’ve performed at many high-profile venues. What's been your highlight?

Wigmore Hall is always a highlight – the whole building has an amazing sense of history and prestige and the acoustic in the hall is unbeatable. A particularly memorable performance in Manchester was that of Georg Friedrich Haas's third string quartet, which we played as part of the Decontamination series curated by Larry Goves at the RNCM. The piece had us sitting in four opposite corners of the room in complete darkness and following aural cues to determine what to play next for up to an hour – it makes you listen in a really different way and you can have fun influencing what direction the piece takes next. A bit like a musical version of the Goosebumps books!

Who are your favourite contemporary composers?

We've covered a large variety of music by living composers, particularly as Park Lane Group artists – it's so important that we all get our teeth stuck into this sort of repertoire, where we are dealing with completely new musical languages, and often new techniques of playing.

One piece we've played in the last year that stands out is Camden Reeves String Quartet No. 1 Fireworks Physonect Siphonophore. For a lot of the piece, we are all whizzing around the instruments to create an upward cascade of juicy harmonies. It was tricky to put the piece together but it was really exciting to work with Camden (in a Skype rehearsal!), and then perform it in St. John’s Smith Square. Other contemporary composers we are really keen on include Thomas Ades, Anna Meredith, Larry Goves, Richard Blackford, Brett Dean and Colin Matthews.

You were selected for a mentorship to study with cellist Christoph Richter. What did you learn?

When studying at music college, it's easy to get bogged down with the technicalities of playing your instrument or trying to adhere to a particular 'school' of playing. Christoph helped us to see the bigger picture and have faith in our own interpretations. He always encouraged us to find our own voice as a quartet.

What can you tell us about the Beethoven cycle you’re working on?

The Beethoven cycle is a really exciting one: over three years starting in 2020, we're performing all seventeen Beethoven quartets and all six Bartok quartets. Alongside that, we'll be performing new works commissioned specially for the project and working with young composers on new pieces created in response to themes presented in the Beethoven and Bartok works. We're also planning to deconstruct some of the concerts and take them into primary and secondary schools to get children really listening and engaging.

What opportunities are out there for classical musicians?

The sort of opportunities we've benefited from are things like competitions and young artist platforms, which help us in building up a reputation and ultimately getting booked for concerts. But you can also create opportunities for yourself by coming up with ideas and using the contacts and resources you have to make them happen.