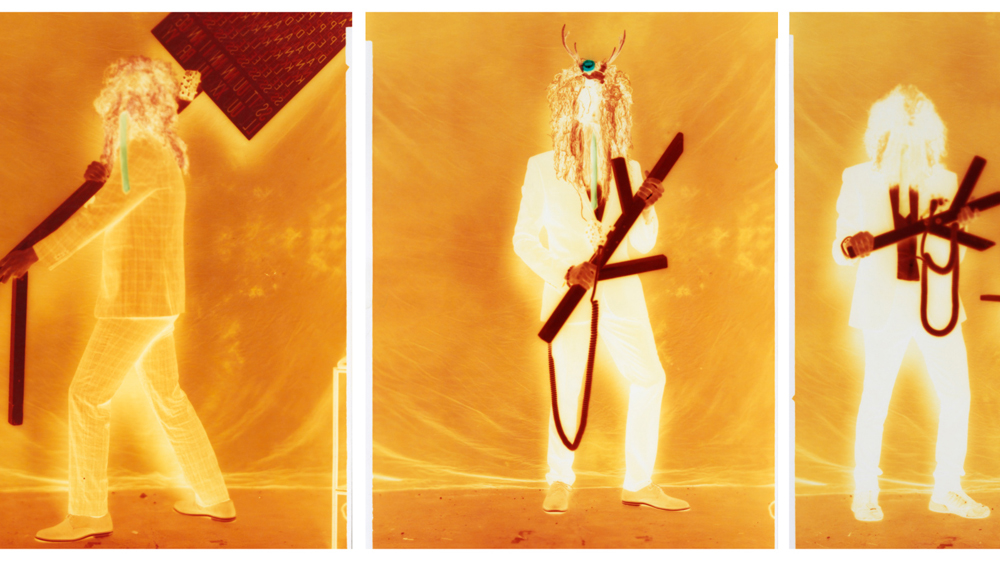 ‘It’s all just trying to be delinquent without stepping into all the other ways of being delinquent, without getting arrested… just about’ muses the Snapped Ankles’ member known only as AUSTIN.

‘It’s all just trying to be delinquent without stepping into all the other ways of being delinquent, without getting arrested… just about’ muses the Snapped Ankles’ member known only as AUSTIN.

Formed in East London in 2011, the DIY collective breached their underground origins with their debut LP Come Play the Trees in 2017.

As post-punk, krautrock, psych-rock mixologists, with a background in performance art, the band transcended their alternative origins with a record that was as catchy and danceable as it was odd.

Retaining a mysterious air and hidden identities (thanks to costumes they wear), the band are set to return with the follow up to that debut record.

We sat down with the enigmatic AUSTIN to chat about their forthcoming album Stunning Luxury, the DIY spaces that shaped the band, and the benefits of  a good disguise…

What was the thinking behind your latest record, Stunning Luxury?

We sort of developed a cheeky plan which came from the Woodrose characters that we created for the Come Play the Trees album, which has a sort of performance attached to it.

We would turn up at these venues, the first time we did it was in a squat that was under the threat of eviction, and we dressed as Foxtons estate agents. We put our Woodrose heads on, and it was that same way of being mischievous.

Instead of logs we had our synthesisers attached to estate agent signs. It was just a fun cheeky thing to do in a cool warehouse, that’s under threat. And that gave us something to get our teeth into, something to riff on. From there we wrote some songs that were a bit sort of funky and ‘you kind of agree with us but we’re shoving it in your face’ type thing. We’re stating the obvious, but its kind of was worth saying.

So that was the seed of it, and then when we came to making the new record we had disparate songs about different things, but [although] it’s not a concept album as such, we sort of topped and tailed it with a little bit of a narrative that’s relevant.

So that’s where the Stunning Luxury title comes from. We’re losing venues, but again, it’s not really a moan about artists losing studio space because artists will always just move a little bit further out and gentrify another area [grins].

It does start to open up conversations on the developers who are knocking down the estates paid for by the local government. There’s the whole buildings as commodity, which is something we don’t want to be too flag-waving about. We’re just going ‘it’s immoral and plain wrong that the developers are running the show.’

And it’s not just London, when you go to Leeds or Manchester – we think it’s London – but literally, they’re building those places for no one to live in. It’s like they’ve just gone, ‘there’s no rules.’ You put your money into some British land and then they take the brochure off to China and say buy this and then rent it out to some poor millennials.

How has your sound evolved since Come Play the Trees?

Come Play the Trees was gigged heavily before recording and editing. This one was more... it obviously had to happen a lot quicker. So, you had to have that classic second album, one that was actually commissioned rather than just making it up as we’re going along.

Sound-wise, I’m hoping it sits next to it really. There’re a few different dances we can do [laughs]. I think Come Play the Trees was a bit more tribal, this one’s got more disco-y, funky tracks. We love a lot of different types of music so it’s like trying to throw it all out without copying too much.

And trying to make lots of mistakes, whether it’s bad recording, or editing, or sloppy mixing, but unfortunately, we had Danalogue (Dan Leavers) from The Comet Is Coming doing our mixing, and he did a really good job, so we couldn’t make a mistake there.

It’s a process of throwing a lot of elements onto a computer and seeing what comes out. To me it’s a follow-on to the first album, sonically it’s a little less cluttered, the first album was [more cluttered] mainly because we’d been playing some of the songs for four or five years, so they were quite dense in ideas. It was quite difficult for someone to come along and peel all of that back on that first album, so I think this one should have a little more space.

How differently do you approach live performance and recording, in terms of sound?

It’s a mix. I kinda like the three minute, direct, very sort of structured pop song, and then you‘ve got the 8-minute ‘do-whatever-in-the-middle-of-this-and-see-what-happens’ songs. It’s a combination of the two, I think.

There’s something to be said for getting a nice sharp arrangement and edit, and then learning to play that. You have to be careful not to play too many instruments at once on those ones.

Snapped Ankles bridge an artful gap between weirdness and accessibility, do you consciously lean towards either or is this unlikely confluence a natural outcome?

The aim always is to make something that lasts as long as possible. I’ve got a fairly big library of music to go to. If you kind of aim for the sound of the now it’s all the music I think I didn’t really care about or [there're ones] that made a lot of mistakes that pop up on my iTunes like ‘when the hell was that? Oh, it was 20 years ago’.

There’s general, super accessible music and whether you’re in a particular scene where you know what that is, I know what that band look like. I suppose we try quite hard to avoid a category, [laughs] but we get put in one – everyone does, don’t they. So, we’ll see. I suppose the top ambition is to have your own category. Like Depeche Mode [laughs].

Are the ghillie suits here to stay, or do you envisage a time when the band will perform sans-disguise?

The Come Play the Trees is a concept we’d like to develop. Maybe do another album where we’re these forest monsters, maybe do it better with a better budget. And we could play in the woods and we make our own stuff and look at rock / technological music meets nature, and try and out Bjork, Bjork.

And that’s a whole world we can go down, but we’re quite keen not be always the same. We’ve got a few different looks, but we found keeping the heads is quite good. It’s a look and a recognisable thing. There’s a mask, which has its benefits. We’re keeping it all going, but there’s no absolute. The plan is start messing it up if we can – are you gonna get the Come Play the Trees show or are you gonna get the estate agents or mechanics?

What was it I was reading today? You know the 10-year challenge? Someone had posted that the 10-year challenge is probably developed by some AI computers to face match aging. I think it is a fact that in the next 10 years the face is going to become quite a valuable commodity. A lot of things encourage you to show your face and give away those details, but it’s still not clear.

I think that was just another by-product of the mask. Generally, the mask allows the band to throw away their inhibitions and saves the audience from seeing the grimaced face of musicians concentrating. It also sheds / protects the ego – you can’t suddenly start strutting around like Jim Morrison or some other hot rocker. They’re really useful in this modern-day age of facial recognition.

Your band grew out of DIY spaces and you play independent venues, without which, would Snapped Ankles have thrived?

We’d have found some little clearing somewhere, we’d have crashed someone’s party. We did a few times. There’s a track on the new album called Rechargable, the genesis of that song – which has a speed up at the start – comes from a power cut party me and a friend ran.

We had this party with no power that was kind of a disaster scenario. You had to have a torch to get in and all the bands and the DJs had to play music that speeds up, and while you're drunk you have to get onto a bunch of bikes we’d rigged up to generators that powered the whole space.

So, it was kind of crunky, classic bike powered thing. And part of that group came from one of those nights. The faster you could go the more people were trying to keep up, the room would get brighter, and brighter, and brighter. So you’re drinking, and cycling as well, you get quite a buzz.

Quite a lot of gigs around the album, and we’re just starting to get calls now for festivals. We had a lot of fun last summer. We did a lot of festivals, Green Man, End of the Road.

We took The Satellite Ankles, everyone thinks they’re us – so we have a group in full costume, in full ghillie costumes who move around the crowd. They have symbols and cow bells and they’re briefed to make textures and tones rather than, they’re not meant to be full on, but some of them get too excited. Apparently, they were going up the queue while we were on [at End of the Road] and some people thought they were us. It was good this year – amazing what a bit of global warming does to a festival.

We made a conscious decision last year, because the year before we started getting out of London – we’d only ever played locally, apart from Liverpool, but that was it – in 2017 we just said yes to whatever, and we found ourselves doing two festivals a weekend.

It was a bit of a shock, because we couldn’t engage with the festival because we’d just turn up, play. You’d have the worst bit of having to camp, and then pack up and go the next day. So last year we decided we’d do one festival a weekend. We’d take our Satellite Ankles and do the whole festival. It was so much fun, so much better. And you don’t wear everyone out.

What was the last great piece of music you heard?

Stunning Luxury is released on 1 March via the Leaf Label