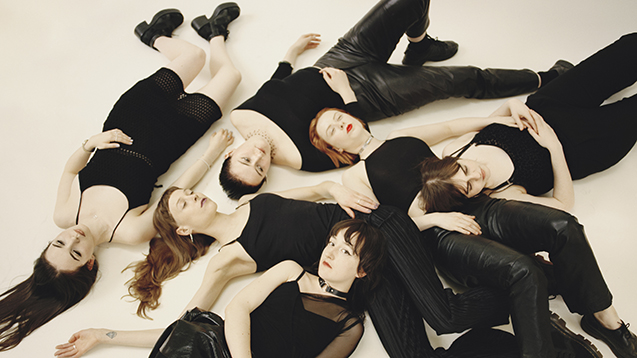 Since their formation in 2016, they've curated events, hosted a monthly show on NTS Radio, published a zine, run their own mix series to promote marginalised producers, DJs and artists, and held workshops giving women and non-binary people an introduction to radio.

In short, they're a gang of six demonstrating the power to spark change in established scenes.

Made up of DJs, producers, VJs, writers, graphic designers and fine artists, the collective have been honing their sets across London, brewing up a heady mix of techno that takes in psychedelia, coldwave, acid trance, dubstep and electro.

Here, in this extended interview taken from our Mx music: deconstructing gender and sexuality feature, they tell us more about the thinking behind the project, plus the changes – and challenges – they're seeing in the scene...

What’s the thinking behind SIREN and how did it come about?

SIREN launched in January 2016 as a response to the homogeneity of rave and club night line-ups in the techno and dance music scene, as well as a desire for more creative and safer spaces for women, non binary and queer people to party. This was born out of our shared frustrations at being unable to enjoy the music we wanted to (techno) in a space where we felt safe enough to be ourselves without being objectified and harassed amongst a sea of men.

What has the reaction been to the collective?

It all happened very quickly for us, people were surprisingly quick to support us – but we have to acknowledge some levels of privilege in that. We have also received critique for what we do too, which is a really important dialogue as we’re not perfect spokespeople and have much to learn still. We’re just a group of passionate volunteers who want to promote and support music from talented female and non-binary artists.

The early support we received gave us this platform we were not expecting at all, which was a pretty daunting position to have been thrown in. SIREN was never about us as individuals, and we do our best to make sure everything we do can be used as an opportunity to help other women and non-binary people in the scene.

Your mission statement is to, 'Create a safe and immersive space for those who are underrepresented in dance music, whilst continuing to critique the electronic music scene as a whole.’ What's the landscape like for those that are unrepresented?

Line-ups are still skewed in favour of the white, heterosexual cisgender male. Female:pressure have done some very insightful, albeit unsurprising, surveys on this. Queer spaces in London are closing down and a lot of the remaining commercial club nights have immensely expensive ticket prices that leave their events inaccessible to more marginalised audiences, which is leaving a lot of such nightlife quite stale.

Sexual harassment in clubs is a familiar occurrence for women and other marginalised groups, so it’s important to us to create a safer space without prying eyes where we can forget about the patriarchy for the night and feel free and liberated.

There are certainly a lot of LGBTQ artists, but few are getting the amount of recognition that they should. It’s somewhat shocking in a scene whose origins owe so much to the queer scenes of Chicago and Detroit – or even looking to spaces such as Berlin’s Berghain. A lot of it stems back to the way music education is approached and the hyper-masculine approach to how electronic music is taught, and also perhaps the commercialisation of dance music in recent years.

Do you think positive changes are being made to promote inclusivity in the industry?

We feel that there has been positive change on a low level across the music industry in the last five years we have been involved in it. There is now recognition that women’s voices need to be heard. This has been reflected positively in more women DJs being booked on line-ups. But it seems at times this has been born out of the realisation that having all-male line-ups isn't ‘cool’ anymore and booking women is now economically advantageous.

This trend at the upper levels of the music industry has also not yet really spread to the same level of support for non-binary artists, queer artists, POC artists. And there is still a lot to be done on the sexual harassment in clubs front.

It's easy to feel there has been positive change within our small bubble, but on a wider commercial level there has been little to no change in those dance music spaces. Further, at the top of pretty much all major influential electronic music organisations, the people making most of the decisions and gate-keeping this culture are pretty much all 30-40 year old cisgender-heterosexual white men.