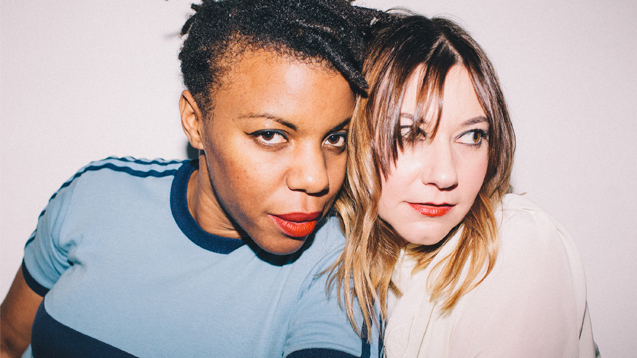 'Who doesn’t love to play air drums when a bongo or cowbell comes in?' the Norwich duo on what drives their metronomic funk and post-punk squiggles...

Norwich duo Sink Ya Teeth are responsible for some of the finest metronomic funk and illicit disco we’ve heard this side of the electroclash explosion.

Layering elastic basslines with gritty beats, Maria Uzor and Gemma Cullingford have hit on a groove so infectious it hurts.

Coming together over a shared love of ESG, Tom Tom Club and Grace Jones, they propel their minimalism with shrewd synth lines and jacking melodies.

They first got us in a spin last May, when debut single If You See Me beckoned us into their low slung soundworld. Since then, they’ve released classy follow-up Glass, while grafting on their debut album, which gets its first airing this June.

With brand new single Pushin’ in the pipeline for 2 February, and some live dates in the calendar, including a support slot with Mary Epworth tonight (Tuesday), we get the skinny from two of our fave new noisemakers…

How did Sink Ya Teeth come together?
Gem: Maria and I were introduced by a mutual friend when Maria’s band were looking for a guitarist. We got to know each other a bit through that, and then the bass player went travelling, so after just a few gigs in that band Maria and I decided to do something with just the two of us as we realised we had similar music tastes and vision.

What’s your mission?
Maria: We just want to write and produce good music, and to keep learning and growing, and have fun along the way.

What makes up your sound?
Gem: A bit of everything really! As we record and produce in our homes almost everything is programmed as we don’t have the equipment or space for too much analogue equipment or live instruments. As a duo it’d be impossible for us to play every instrument live too, so that has contributed to our electronic sound.

Live we use a laptop for main drums and I play live bass. Maria plays synth pad and a Korg too, and occasionally live snare, floor tom and guitar, depending how far we have to travel with all our gear on the train!

How important is rhythm and danceability to your music?
Maria: Being a dance band I think it’s pretty important!
Gem: It’s also what makes music fun to make and play live. We usually create danceability with a solid beat as the first building block. Then that’s when the fun starts with adding off-kilter rhythmic percussion, beeps and textures coming in and out which don’t necessarily have to stay solid, especially if you have a repetitive bass line or arpeggiator too.

The kick, bass or arpeggiator create the rhythm of the song, and it’s the beeps, percussion and textures that create the interest and character. Who doesn’t love to play air drums when a bongo or cowbell comes in?

Who or what have been your biggest influences along the way?
Gem: For me it’s the post-punk bands and the way they fused disco beats, percussion, strong bass lines and angular guitars. And those that incorporated electronic sounds, beats and synths on top of that too - such as Tom Tom Club, Fad Gadget, New Order, Talking Heads, Gang of Four, ESG, Bush Tetras, A Certain Ratio, to name just a few. And more recently LCD Soundsystem, LoneLady, Jane Weaver, !!! And I just love David Lynch.
Maria: Eighties black music has been a big influence for me. The simplicity of those early Chicago House records with pioneers like Larry Heard, the slick soul of groups like Rene & Angela, Loose Ends, Zapp & Roger, the funk of James Brown and War. Stick an African bass line on top of all that and I’m in heaven. And vocally I love the depth and drama of artists like Bowie, Nina Simone, Grace Jones and Patti Smith.

What’s the thinking behind your new single Pushin? You’ve said it’s about addiction – can you tell us more?
Maria: Gem wrote the music and I had some lyrics knocking around that I hadn’t done anything with and they seemed to fit pretty well. Lyrically when I wrote it I had an image of the Evangelical Christianity in mind; that frenzied and almost sexualised addiction to religion and salvation.

What’s Norwich like for music-makers?
Gem: It’s a very nurturing city for music-makers. There are opportunities for young musicians just starting out via the Sonic Youths scheme. The Norwich Arts Centre team are pivotal in helping bands and solo artists of all genres play decent gigs in our favourite Norwich venue, and they’ve been super supportive of us since we started. The Owl Sanctuary is a great venue for underground bands. And there are all sorts of other smaller and interesting venues and promoters that get musicians playing live, and a really supportive community with that.

At the moment there are a lot of good bands coming from Norwich such as Graceland, Mega Emotion and Peach Club. Birds of Hell is a solo artist who’s doing really interesting stuff too.

What track always gets you up to dance?
Gem: I don’t do a huge amount of dancing these days, but my go-to track when I need to get up and do some energetic cleaning (does that count?) is Bulletproof by La Roux.
Maria: 212 by Azealia Banks and Gone With The Wind Is My Love by Rita & The Tiaras.

What’s the last great record you heard?
Gem: A little late to the party on this one, but I’ve just discovered Music Complete by New Order.

What does 2018 have in store for Sink Ya Teeth?
Gem: Drum roll…. we’re releasing our debut album in June!! The third single from it, called Pushin’ is coming out on 2 February, and we’re playing some shows in Bristol, Brighton and London with A Certain Ratio, and Manchester with the Membranes and Choir in May, as well as a headline gig at Norwich Arts Centre around the album release.

We plan to do a short UK tour in the autumn, all of which will be announced on our socials so keep your eyes peeled on there! We’ll continue to write new material amongst all that too. Our first gig of the year is tonight (23 January) at Oslo, Hackney, supporting Mary Epworth.