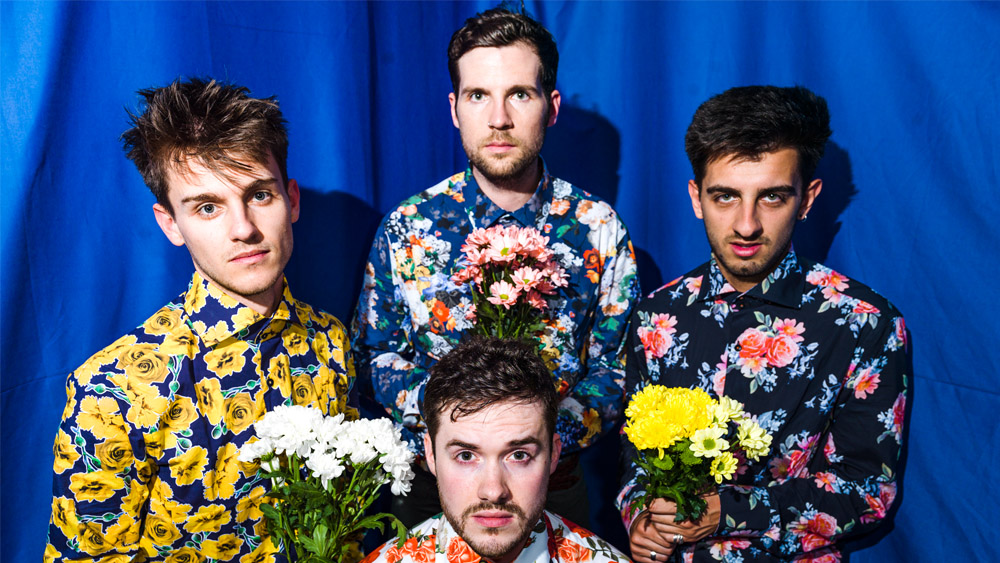 The Cardiff-based four piece have made a habit of not playing to expectations since their inception.

With just a handful of singles to their names, the quartet swiftly drew comparisons to acts like Talking Heads, Gang of Four and XTC.

Taking a more angular approach than many of their contemporaries, Silent Forum have carved a unique line of uneasy punk crossed with skewed pop sensibilities.

Earlier this month the band released their debut long player, Everything Solved All at Once, with which the band reached beyond their noir-ish tendencies towards a sometimes brighter, and infinitely more complex, sound.

We are a product of the internet. Elliot (drummer), Oli (bassist) and I met each other through online message boards, having had no other prior contact with each other. We had a couple of line-up changes with different guitarists, Dario then joined us after auditioning to be in the band, it was obvious as soon as we played with him that the group was complete. We are now each other’s closest group of friends.

What’s the thinking behind your debut record Everything Solved at Once?

Musically we wanted to write something vibrant and varied. We’d come out of a period where we’d written a lot of gloomy indie noir songs, this was great, but we wanted to mix this style with something peppier.

Lyrically I write a lot about workplace dynamics I have observed, my friends and the band. I try to keep it a little absurd, e.g. shining a light on the lack of perspective people who think they are ‘slaving away at their job’ have by comparing them to 19th century rag pickers working outside a loom. I did not want to draw too much musical inspiration from the outside world as it is so depressing at the moment. I’d hate to write a self-righteous song about politics. Do not expect a dance-punk banger called ‘Brexit Hits a Broken Britain’ any time soon.

We always write songs as a four piece, jamming an idea until it forms a whole. When it is almost finished, Elliot (our drummer) will look at the song structure and make sure it is as satisfying as possible. He keeps an eye on what we have done with our other songs so that we do not go down the same route each time. We are very open about what we do and do not like in each other’s writing. I am the only one who is ever precious about my ideas!

Charlie Francis (our producer) essentially becomes a fifth member when we get into the studio, helping present our ideas to the world. We share ideas between the five of us and perfect each of our parts. Recording the album was a very friendly, happy and cooperative experience – I think we only disagreed with Charlie once during the whole process. It was not a case of him telling us what to do or vice versa, we were a team.

How does it feel to have it out in the world?

We have been getting the nicest messages from people, some of whom have been waiting for the record for years and others who have discovered us on release – this is beyond our wildest dreams. Being asked to sign the odd LP is surreal. I am so familiar with the record that I could not imagine what it would be like to hear any of the tracks dispassionately from an outside perspective, so it has been exciting hear other people’s takes on each track. Someone complimented me on the ‘mad backing vocals’ for Kind of Blue yesterday and it made my day.

Who or what inspires the band the most?

Each of us draws from completely different pools of influences as we all listen to different music. I think we get labelled ‘post-punk’ because that’s what the vocals most closely relate to. Ultimately, we inspire each other, I consider myself incredibly lucky to get to play with the other three members of the band.

You already have a formidable live reputation: what do you most enjoy – recording or playing live?

There is always a very long, nervy build up before a gig, because you want every audience to get the best possible show and you want to do the material proud. Then there is an intense hour-long burst of adrenaline and time blurs past. I tend to get into the crowd when I’m performing as that connection with the audience is the whole point of playing live in the first place.

Recording is very different, far more considered. We pour hours of attention into each individual part – guitar tones, backing vocals, layering the bass. It is a patient but rewarding process, you see a track slowly build up into a real-life thing. It does not feel like a song truly exists until it has been recorded, it is just exciting potential.

They are incomparable. I love both and prefer neither.

What are your thoughts on the Welsh music scene and how do you see your place in it?

We have been pitched as being slightly outside of the Welsh music scene and looking in – this has stemmed from the lyrics to a couple of our singles which have lines like, ‘we’re destined to be a local band not on the local radio.’ In truth though we’ve been embraced by the scene and have great relationships with loads of other Welsh bands. I think Wales’ musical output is incredibly varied and not easy to sum up. It is a hot bed for talent but bands (including us) could do more to look outside of their immediate bubble and try to crack the UK/ world as a whole.

You’ve been described as an ‘uncouth Talking Heads’ – what’s your take on that description and how would you define your sound?

I think the single Spin does a good job of summing up the frivolous, fun parts of our sound without ignoring the darker, more awkward bits. There is some Talking Heads in there, in that we are happy to flit from super sweet to very strange in the same breath. The darkness is leftover from when we were a moodier, gloomier band, which is where we really cut our teeth as songwriters. Then we have songs like Safety in Numbers which is nothing like Talking Heads really, it’s more like a folktronica Nick Drake – it definitely still sounds like the same band though.

Who do you have on repeat at the moment?

The nu jazz act GoGo Penguin are a brilliant trio who play glitchy dance music inspired piano, double bass and drums. Its weird hearing break beats in Jazz. I’d also mention Protomartyr who is the best post-punk band in the world right now and Little Simz who is an amazing rapper from the UK.

We are definitely doing a tour next year and are in conversations with a few bands to see what is going to make for the most exciting shows possible.

Everything All at Once is out now via Libertino Records.