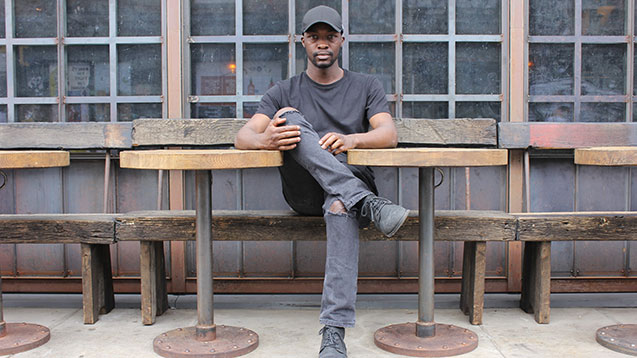 'He inspired me to compose songs about the struggles of being deaf' - the signsong rapper shares his musical influences...

London based hip-hop producer, writer and performer SignKid hasn't let being deaf get in the way of creating music.

'Chance The Rapper hired his own sign language interpreters to join him on stage on tour to make it fully accessible for deaf and hard of hearing fans. It gave me the hope to continue creating independently,' he tells M of his inspiration.

The up-and-comer, who signs his songs, released his debut EP Music is the Message last year and is already making waves in the industry. The video to his track Newsflash was nominated for Best Artistic Short Film at Deaffest and he was recently announced among the first recipients of the MOBO Help Musicians Fund – a new initiative set up by MOBO and Help Musicians UK to assist new artists in realising their musical ambitions.

Through the initiative, he's got involved with Musical Vibrations: a new project aimed at deaf young people, where's he's been testing out vibrotactile equipment.

He'll also be using the funding to produce a video to send a positive message to the deaf and disabled community about access to the music industry.

Here, in an extended interview taken from our Formidable Flows feature, we chat to the signsong rapper to find out his thoughts on UK hip-hop and rap, plus what inspires him to make music...

Rap is still just part of hip-hop. However, grime is not hip-hop. Hip-hop was about having fun, dancing, rapping, politics, fashion and freestyling. It gave the black community a respectable presence in the streets and the world as it expanded. Hip-hop deals with serious issues such as politics, poverty, gangsterism, drugs, police brutality etc. It made the black community aware of the need to work together as one to solve social injustices, pointing out the importance of social awareness.

Grime developed out of earlier UK electronic styles including UK garage, and influence from dancehall and hip-hop for style, freestyling fashion and lyrics. That’s the way that they dress and speak. I think grime can mix with hip-hop and rap. Some grime artists are rapping over grime beats. Grime is more rapid around 130 or 140 bpm and often more aggressive, with hard hitting lyrics and electronic sound. It makes makes grime a very unique, original sound.

I am not from the UK but I personally think London and Bristol are still continuing to make hip-hop and rap. I want hip-hop and rap to evolve. Without it, I wouldn't be making music today. The same goes for grime artists.

Independent artists have changed in recent years with the likes of Chance the Rapper, Stormzy, Macklemore and many more. But I think I would say Chance The Rapper impacted and inspired me, making his own original music independently without help from big record labels. He hired his own sign language interpreters to join him on stage on tour to make it fully accessible for deaf and hard of hearing fans. It meant I'm able to feel part of the music and gave me the hope to continue creating independently. Chance made me feel like anything was possible.

When I took up reading Tupac's book and songs at the library I thought it was very interesting to learn more from him because he was not afraid to speak the truth, his mind and heart during interviews. I felt motivated and empowered. He inspired me to compose songs about the struggles of being deaf. My desire is to make good music kids can look up to and feel inspired by.