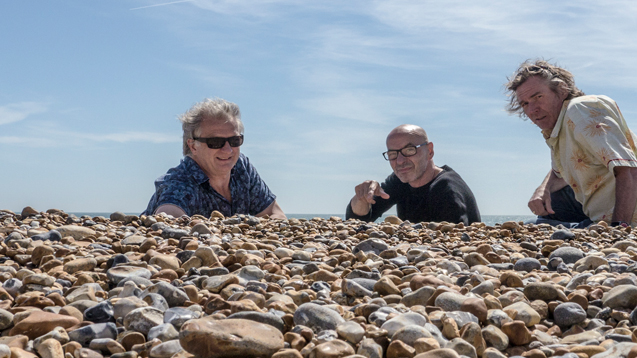 ‘We don’t sound like anyone else’ - post punk legends Shriekback on the past, the present and where they’re heading next…

Formed by previous members of Gang of Four, XTC and Out On Blue Six, Shriekback are a post punk new wave supergroup who, some 30 years after their creation, are still going strong.

With 13 albums to their name and numerous line up changes, the outfit are one of the scene’s game changers with classic tracks such as My Spine (is the Bassline) and Nemesis guaranteeing them cult status.

Now with new material lined up for 2017 and live dates in the offing, we caught up with original member Carl Marsh for an extensive interview exploring their past, present and where they’re going next…

How did Shriekback first get together?

It was started by Dave Allen, following his departure from the Gang Of Four. He did an interview in NME saying he was looking for people for an experimental new project, so I sent him my entire catalogue of material - i.e. one self-released seven single by my first band, Out On Blue Six - and bluffed my way through the door.

Barry Andrews was already on board, then through making the first recordings a shifting line-up eventually settled down to the quartet of Dave, Barry, myself and drummer Martyn Barker that formed the core of the band up to the Oil & Gold period. That’s the short version, anyway - the full family tree gets very complicated: how long have you got?

Could you explain a little about the musical climate the band was born within? What was it like to be in a band back then?

That whole post-punk period was very exciting. Lots and lots of bands burning through ideas and trying things out, with a very open-minded audience pushing them on. When Shriekback started I was living in a squat in Camden, as were a lot of other musos - Scritti Politti were round the corner, 23 Skidoo up the road. If you shut your eyes and threw a rock you’d hit someone in a band, basically. I had a job as a gardener doing the window-boxes of pubs around Covent Garden from about 3am to 10am, then a couple of hours sleep, Shrieking through to the evening, couple of hours sleep, out seeing other bands and clubbing, couple of hours sleep, repeat. Probably not the healthiest lifestyle, but I wouldn’t have missed it for anything.

What was the initial inspiration behind the band’s sound?

Well, we were always about ‘making records’ rather than ‘writing songs’, in a way, improvising and finding a groove from which a song would emerge rather than building an arrangement around a lyric and melody. We had a very diverse set of musical influences, but if I had to pick an album to illustrate that it might be Talking Heads’ Remain In Light. The studio was always a key part of the writing process, not just the place where finished ideas were committed to tape. We had a publishing deal with EMI Music and the basis of that was that we could use their studio in Denmark Street, KPM, to make finished records - for all their other artists it was a demo studio, and they’d then go off to a ‘proper’ studio, with a name producer, to make a glossy final product. We traded that for the time and freedom to work through it all independently. KPM was where the whole Shriekback sound was worked out - weeks of trial and error and getting to know each other. The first result of that was the six-track mini-album, Tench.

Your debut album Care arrived in 1982? How did the record come about? How was it made?

We had no idea how Tench would be received. We’d probably lost any objective angle on it after crash-testing ourselves in the basement in Denmark Street for quite a while. As it happened, it went down okay. We also did our first live shows and that seemed to work as well, so I guess there was more confidence when we went back into KPM to make Care. Again, there were no songs written beforehand, we just found grooves, layered up and stripped down tracks of ideas and wrote lyrics and tunes around that. It came together very organically and effortlessly - from blank tape to master tapes in about three weeks. I wish everything worked like that.

How has the band’s sound evolved over the years?

Well, some of the developments have been driven by line-up changes and circumstances - at times we’ve been a five-piece, the core members plus one other, at other times it’s expanded to a bigger sound with extra percussion, backing vocals and so on, for a while it was more or less an acoustic set-up. In the studio it’s been everything from Barry more or less solo to recordings featuring a bigger band with lots of guest musicians. We’re always looking for new sounds and textures, so whatever it takes. We don’t really have any rules about ‘the sound'. On the other hand, I think there’s something about the character of it that’s still quite unique - I don’t think we sound like anyone else.

Could you explain a little about recent developments with the band - Without Real String Or Fish is the most recent record and you’re now back touring – what has prompted this new wave of activity?

The recurring question in all the communications we get from fans, dating back to the last live shows about 25 years ago, has always been ‘when are you guys playing live again?’. The answer was always ‘probably never’, partly because there weren’t enough of the original team involved at any one time to make it musically feasible, partly because we couldn’t see how it would be financially viable to get the band up and running from a standing start - wages, equipment, rehearsals, all that stuff.

Meanwhile, Shriekback has continued to release albums consistently. I came back in towards the end of the making of Life In The Loading Bay, the album before last, and contributed two tracks. Without Real String Or Fish was more of a proper reunion, with Martyn and I both involved from the start. As that’s three-quarters of the original core team, that meant we could at least discuss ’that live thing’. Then we realised that if we didn’t do it now, we probably never would. Which in turn made us realise that we actually wanted to! We also had an offer to play a festival in Europe, which - although we couldn’t do it at the time - seemed to indicate that live shows might be sustainable if we could overcome the initial hurdle of funding the start-up and getting as far as gig one. We made a plan, did the sums, pitched it on Kickstarter and, to our relief and delight, our hugely loyal and generous fans came through for us. So off we go.

What should audiences expect from the upcoming live shows?

They’re big! We looked at the range of the catalogue we wanted to play and figured we needed a lot of firepower to deliver it properly, so we’ve got an 8-piece band. Barry, Martyn and myself are present and correct. Dave, unfortunately, wasn’t able to do it - he’s been settled and working in America for years now and the logistics and numbers just didn’t work out for him in the end. So we’ve got Scott Firth (from P.i.L) on bass - he’s played with Martyn before and locked in immediately, the groove is superb. Then there’s Michael Cozzi on guitar, Steve Halliwell on keyboards and the Partridge sisters, Wendy and Sarah, on vocals - all of these have played in various incarnations of Shriekback before, but this is the first time we’ve all been together, it feels like a family reunion or something. We just did our first warm-up show at the Con Club in Lewes and it was amazing, if I say so myself - packed, everyone dancing and, I must say, a few tears shed, in a good way. All pretty emotional. Now looking forward to the first big one at Shepherd’s Bush Empire.

Obviously the music industry has changed significantly over the years – have you any thoughts on the business and where it currently is?

I don’t feel particularly engaged with ‘the music industry’ at the moment, certainly in the sense of dealing with anything like a major label - I’ve done that with Shriekback and as a solo artist, both in the UK and the US, and I can’t say I miss it. We don’t need huge amounts of money to make records anymore and the internet and social media add reach to independence. Having said that, it’s hard work to make money out of it - not just as a recording artist, but also fields like commissioned music and library music. I think there’s a way to go before there’s a model - or a range of models - that works for everyone.

Do you have any advice for new bands and songwriters?

If a musician is reading this in a PRS magazine, then they’ve probably already got the main thing - be a writer, keep writing, write with different people, make sure you get your credit and make sure everything’s registered and protected in all the right places. That’s where the money is! If you keep adding to your catalogue it all eventually starts to add up, even if you don’t have ‘a hit’. And it’s very rewarding when something you’ve written gets covered or used in a film or whatever - like your baby’s grown up and got a job. And if baby sends some money home, great.

Catch them playing live at:

Listen to the band’s classic Nemesis below and look out for live dates over the summer.