'There’s no traditional venue space that is quite the same as when a community-led initiative happens' – Shopping chat DIY spaces and their new album...

Shopping are a staple on London's DIY scene. The trio have been honing their minimal, dance-punk sound in the underbelly of the capital and beyond since late 2012, and now they're back with a third album, The Official Body, which stays satisfyingly true to their roots.

Their second release on FatCat Records, the Edwyn Collins produced record serves up 10 slices of spiky, bare-to-the-bones tracks that bring the party vibes, all the while punctuated with their signature call to arms lyricism.

It's all there on opening track The Hype: a song which urges to question the status quo and spark change before it's too late...but nevertheless will still make you want to jump up and dance.

Written and recorded around a relentless touring schedule across UK, Europe and the US, it's due on 19 January and is accompanied by a UK tour which you don't want to miss (see dates below).

Here, in this extended interview taken from our Mx music: deconstructing gender and sexuality feature, we chat to Rachel (vocals, guitar), Billy (bass) and Andrew (drums) about the thinking behind the album, DIY spaces, and the platform for people of colour and LGBTQ artists...


What’s the thinking behind the record, how did it come together?

Andrew: We didn’t have a concept for it apart from we wanted to try some new instruments out and play around with who was playing what. We wanted to expand how we recorded as well so this time around, we worked with Edwyn Collins at his studio Clashnarrow in Helmsdale which is a purpose-built amazing spot, with an apartment attached to it.

You go up there and stay there for a week and have the luxury of being able to walk over to the studio in your slippers if you want to, and play around with some of the instruments he has there.

How was it, working with Edwyn?

Rachel: He loves music so much, he’s so enthusiastic. Constantly singing. We would have meals together which was really nice. He'd be singing along to the radio and telling excellent stories about music.

There are some quite weighty themes on the record. What inspired Suddenly Gone?

Rachel: I was thinking about global warming and finite resources, but also how people are used by capitalist systems. When you’re a creative person, you feel used up sometimes. That’s a sensation that can come from feeling like your identity has been somehow commodified or is fashionable. So people have decided, 'Oh, this year, we all want to talk about brown people, we all want to talk about queers. If you can find one that’s both, then jackpot.' They’re really not interested in the music that you’re making so it challenges your confidence, because you feel like what you actually create is not being valued. But there’s still this attention on you. It’s kind of like you’re being bought.

There’s also, counter to this faddish thing, a genuine community of people of colour making indie or punk music that are connecting with each other. So, that’s really positive and powerful. The song is just about, ‘imagine if one day we all just gave up’. So much music is based on the work of African American musicians. If they all just vanished or had never existed, where would we be?

Do you think there are any significant steps forward in terms of LGBTQ artists and people of colour making music and having a platform?

Billy: The underground is still as strong as it always was, and I don’t think it’s changed that much.

Rachel: We’ve always had a really strong community. In terms of, specifically, people of colour, there’s been a shift. We have a language to talk about our own experiences that we maybe didn’t have so much 10 years ago. We were all really awkward and uncomfortable talking about race. Now, there’s more of the afro-punk thing. There’s a festival in London called Decolonise Fest, which is punks of colour, and it’s really exciting. People coming together that have never met. I’ve formed friendships with people through that. 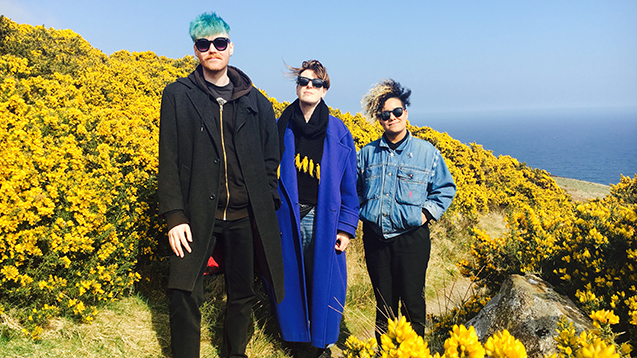 Are there any venues you've come across that you think are championing the message of inclusivity and providing safe spaces?

Rachel: There’s DIY Space in London. And Wharf Chambers, which we played last night in Leeds.

Andrew: You have to create your own space. That’s what happens with Wharf Chambers, that’s what happens with DIY Space. Queers are involved in running those spaces, and they’ve made them accessible and excellent fucking spaces for people to feel listened to and valued. There’s no traditional venue space that is quite the same as when a community-led initiative happens.

I’m in a collective of gig promoters called Spite House. We try to have all-ages-accessible gigs in Glasgow with a ‘pay what you can afford’ policy on the door. It’s kind of crazy how inaccessible most venues are. If someone’s opening a new venue, it’s criminal to do that without ramp access.

What about attitudes in the mainstream? There's been a lot of press coverage this year around gender and non-binary issues – what are your thoughts on that?

Billy: When things are in the press like that [schools relaxing their policies on gender identity], there’s sensationalism around it, where it’s, “Oh my God, this freaky thing.” So, it’s sort of then a bit detrimental.

Andrew: I think there’s a lot to be hopeful about, though. A huge proportion of teenagers and young people identify as gender non-conforming or non-binary now. When I was 13, I wouldn’t even know what the fuck those words were. Thanks to the huge democracy of the internet, people being really switched on and kids growing up really fast on the web, that’s a really positive thing, I think, for identity politics. When those kids grow up in 10, 15 years’ time, it will be really interesting to see what that world is going to look like.

Do you feel then, as musicians, that it’s important to explore those issues in your music?

Billy: I think, because of who we are, we can’t really avoid presenting gender or our own queerness.

Andrew: It’s a by-product of what comes to our minds. What we want to sing about to make music honestly and to write lyrics honestly is going to be with a queer bent. Pun intended! I love that people can listen to our music and feel, maybe, a little bit less alone, or feel a connection. The idea of that is really empowering. That’s what I was searching for when I was getting into riot grrrl or queer punk.

What are your musical goals for 2018?

Rachel: Mine is just to get as many people as possible to hear our music. I don’t think we have a particular aim, like when we get to this point, 'We’ve made it.' We already get to do a lot of stuff, we tour all over the place. I’d like to tour South America, Australia and Japan. That would be really great.