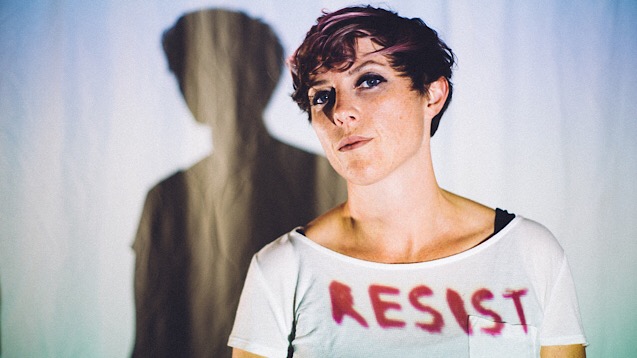 'I like to critique the systems we live in, but to write with hope that liberation struggles can be won' - the Scouse psych-pop quartet's frontwoman lets us in on the story behind the band's sophomore record...

'It’s like Rosa Luxembourg said: "The strike doesn’t cause the revolution, the revolution causes the strike,"’ proclaims Louisa Roach of Scouse psych-pop quartet She Drew The Gun.

The frontwoman, guitarist and songwriter is chatting about the social and political themes behind the group's new acclaimed LP, Revolution of Mind, which takes in everything from personal relationships to the global war industry. 'I like to critique the systems we live in, but to write with hope that liberation struggles can be won,' she says.

Produced by The Coral’s James Skelly at Liverpool’s Parr Street Studios, the band's sophomore offering follows their 2016 debut Memories Of Another Future, and is every bit as addictive. With fiery tinges of PJ Harvey and an even bolder sound this time around, the songs are never far from a catchy pop hook or a shimmering guitar riff.

Born out of Liverpool’s open mic and acoustic nights, She Drew The Gun won the Glastonbury Emerging Talent contest in 2016 and have barely touched the ground since. Last year saw their first ever trip to Texas for SXSW while they were also named as winners of the GIT Awards 2017 in Liverpool.

Fresh from a UK tour supporting The Coral, the band are due to hit the road early next year for an extensive headline tour, which includes London’s The Garage on 7 March.

Ahead of that, we catch up with Louisa to learn about the making of the record and how their sound is developing more 'bite'...


What’s the thinking behind the new LP Revolution of Mind?

It’s about everything from personal relationships to the global war industry, resistance, depression, love, solidarity, capitalism, the human reward system, outsiderness, the things that have been on my mind. I like to critique the systems we live in, but to write with hope that liberation struggles can be won. The thinking being that the only way we can ever really have a revolution - the only way we can achieve the vast changes necessary for our species to survive and to reverse its destructive traditions - is in the way that we think. It’s like Rosa Luxembourg said: ‘The strike doesn’t cause the revolution, the revolution causes the strike’.

I’ve been writing the songs mostly throughout the last 18 months or so between touring. Me and Jack had time to work on demos beforehand and then we recorded in a few stints with James Skelly and Chris Taylor at Parr Street Studios. I think it took nine studio days in total but most of it was put down over a week in May 2018.

What was inspiring you most at the time?

I like interesting writing in whatever form it comes. I’ve been drawn to a lot of feminist poetry recently. A lot of the time I just write to make things clearer for myself, to play around with subjects that have come into my life in one way or another.

How was being in the studio different this time round?

We demoed the songs before we went into the studio, so we had a bit more of a blueprint for how the songs would be. With the first album it was just me going in, putting down the guitar and vocals, and then we would build the track and see what happened. This one had more intent from the start.

How has your sound evolved since Memories of Another Future?

I think the sound has more bite on this record. It’s less dreamy maybe; more bold but still with surreal psychedelic elements.

Your first LP was really well received – did you feel any pressure to follow it up?

Yes, there’s a kind of in-built pressure to do it better. All you can really do is keep building your ideas and see where you get to.

What have you learned about making music since you first started out?

That I’m not here to just churn out songs, I’m going through a process to write them. That I love to write, it keeps me sane. That it’s just a ride.

We’re just about to finish touring with The Coral, next up we’re headlining Her Fest at the Picture House Social in Sheffield on 3 November. We have a few recorded sessions and I have some solo outings, coming up with some music videos, writing spoken word stuff and most importantly putting together the new live set for our Headline shows in February 2019.

Revolution of Mind is out now.