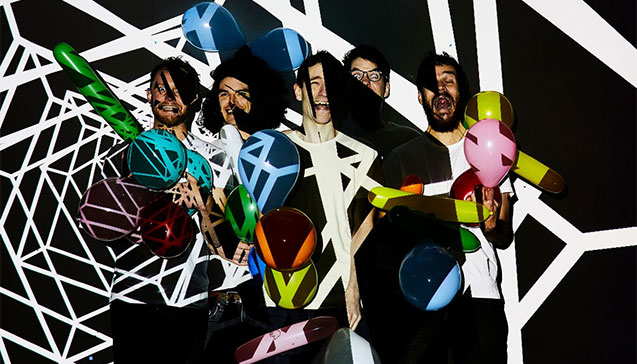 Named after an impossibly funny sketch in nineties cult comedy Brass Eye, it’s fitting Shatner’s Bassoon are a barrel of oddness, inventiveness and wit. Delve in, you won't regret it...

Named after an impossibly funny sketch in nineties cult comedy Brass Eye, it’s fitting that Shatner’s Bassoon are a barrel of oddness, inventiveness and wit.

Their sonic spectacular takes in electronic improv, free jazz and riotous punk to present a puzzling array of ideas that somehow mesh brilliantly.

From their Leeds base they’ve been blasting out the mayhem since 2010, inspired by everyone from Mr Bungle to Matthew Bourne. But it’s their new LP, Disco Erosion, which hits the hardest.

On it, they seem to have digested all the best bits of the DIY scene that spawned them and thrown back their most realised interpretation yet.

With an upcoming tour to showcase the record (dates below), and plans to approach each gig differently, there’s plenty to draw you in to their curious ways.

The name originates from the nineties British comedy series Brass Eye which parodies the current affairs news programming of the era. An episode focusing on a made-up drug called ‘cake’, which apparently effects a part of the brain called Shatner’s Bassoon.

‘What is cake? Well, it has an active ingredient which is a dangerous psychoactive compound known as ‘dimesmeric andersonphospate’. It stimulates the part of the brain called ‘Shatner's Bassoon’, and that's the bit of the brain that deals with time perception. So a second feels like a month. Well, it almost sounds like fun, unless you're the Prague schoolboy who walked out into the street, straight in front of a tram. He thought he'd got a month to cross the street...’

How did you come together and what was the initial thinking behind the band?

We were all studying at Leeds College of Music around the same time and playing in different bands together, but we didn’t start playing in our current line-up till around 2015. The improvised music scene in Leeds was a big inspiration when we first started out; musicians like Trio VD and Matthew Bourne were a big influence on our approach to making-music. We were all into this similar type of music and wanted to have a band where we could experiment with these ideas combining improvisation and composition.

How has your sound evolved since you started out?

The sound of the band is always evolving by experimenting with the pieces in rehearsals and when we do live performances. Using improvisation allows the possibility of something new happening every time we play. Over the last three years there has been more focus on expanding the written material and working on arranging the pieces while still keeping the spontaneity combined with improvisation.

We have spent a lot of time experimenting and refining the material on Disco Erosion. We really focused on these four pieces as a live set when rehearsing and performing them, experimenting a lot with different structures/instrumentations till we found something that we felt worked.

What or who has been your biggest inspiration along the way?

The written music itself is mainly inspired by Tim Berne and a range of modern classical music like Ligeti, Conlon Nancarrow and Louis Andreissen. However, each of us has a wide and disparate influence and approach to making music which all filters into the bands overall sound, meaning the end result is something completely different. Some influences you can definitively hear in the music are Mr. Bungle, Frank Zappa, Captain Beefheart, Tim Berne and John Zorn.

What are your worst musical habits?

You’ll have to come and find out for yourselves.

What’s the inspiration for your new album, Disco Erosion

For this album we wanted to produce a more direct and immediate music while retaining our unique characteristics. Because our music is fringe music we regularly perform to a wide demographic of audiences (DIY, jazz, unsuspecting general public) - presenting freely improvised and experimental music within a different context. This influenced how we conceived, produced, presented the music for Disco Erosion.

How do you feel about the record now it’s out there?

We’re very proud of Disco Erosion, we feel it’s our most accomplished and urgent recording to date!

What can we expect from your upcoming tour?

Each gig will have something different to offer in some way. Each time we play a tune it’s never quite the same; we purposely try and challenge ourselves on stage to make it different and spontaneous for the audience and for ourselves, so you’ll have to come to all the gigs if you want the full experience!

What does the rest of the year have in store for Shatner’s Bassoon?

We will be recording all of the Disco Erosion tour with the intention of releasing a series of live albums later in the year on our own label Wasp Millionaire Records. We’ve also just started work on our fourth album, so we’ll be spending a lot of time hiding away in the Shatner cave working on new material.