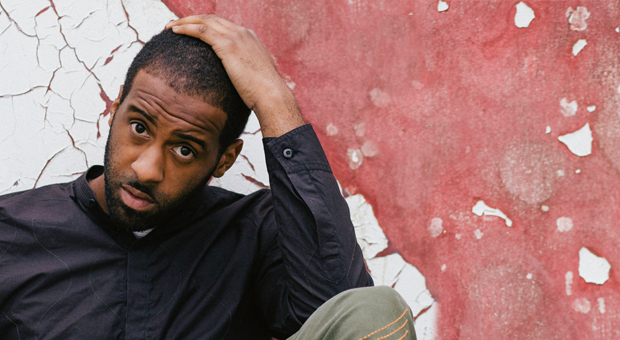 ‘Listen to your inner child - they have the most exciting ideas.’ UK R&B star Shakka on songwriting inspiration and going large at the MOBO Awards…

‘Listen to your inner child - they have the most exciting ideas.’

So says UK R&B singer songwriter Shakka, a fast-emerging artist ending 2015 riding on a huge high. Having been crowned MOBO’s best R&B artist and releasing the acclaimed Lost Boys EP, he’s spent the past 12 months building on early success working with Basement Jaxx and releasing a series of acapella YouTube videos as the Shakkapellas.

Born in West London’s Notting Hill to Caribbean parents, he cut his teeth working with his father in the studio before getting his big break, writing a guest verse on Wretch 32’s smash hit Blackout. Shakka has never looked back and is now eyeing up 2016 as a break-out chart hero in the making. We find out what’s next and why channelling that inner child has been key to his songwriting achievements…

It would have to be Notting Hill Carnival. I would have been very young. There was a massive soundsystem and Sister Nancy’s Bam Bam came on. It woke me up. That was my first memory of music. A soundsystem speaker half the size of a lamp post and basslines.

What made you want to start writing music?

I wrote my first song when I was about 15. I was in a music school and one of the tasks was to write a song, the production and the melody. There was also a part of me that felt Usher’s Confessions wasn’t as good as it could be and I wanted to better it.

Was songwriting something you always wanted to get into?

Yeah I saw it as something more than a hobby. It’s hard to explain. I knew sounds came into my brain all the time and I knew I was randomly making stuff, imitating people whether it was beatboxing or memorising melodies. I just thought it would make sense to make music. You can’t fake how good music makes you feel. You can’t fake how your life can change depending on a song and I like the realness and the honesty of that.

How did you find your way in to music?

I was young and my dad was a reggae musician. So when he went to the studio, I went with him. There’d be times when he’d hear me singing songs by Destiny’s Child, Dru Hill or Usher, and he heard I had a confident voice. So there would be times when he’d ask me to record or voice a track. It taught me what it was like to do a take and stand behind a mike and sing.

Another time was when I was 15 at a youth centre in Lancaster which is where I met rapper Incisive. He was running a talent show and afterwards he encouraged me to continue making music. They were both moments confirming I was on the right path.

Blackout with Wretch 32. He sent me the beat and when I listened to it, it just felt so natural, like it lacked electricity. I went and watched scenes from the Jungle Book and The Lion King. I like those because the animation is in a place where there are no boundaries or limits. It put me in a head space to write with that ethos. I went and wrote about the absence of any electricity and closing your eyes until the sun comes up, which is the real deal of sunlight. Wretch loved it and used it on the single, it was A-listed on Radio 1 and 1Xtra and meant a lot of people found out about me.

So what happened next?

This was in 2013 so I went on to play BBC Introducing at Glastonbury and toured with Basement Jaxx. I was on tour for a while with them. We went to so many different countries, it was overwhelming. It taught me a lot about working with bands, performances and maintaining your voice and stamina, as well as conveying energy to a crowd.

Was working as a solo artist always the plan?

Yes it was. There were times even when I was touring with Jaxx, I had doubts about the quality of my songs and their ability to entertain. For a long time I was working with them but then some songs of mine - When Will I See You Again and the b-side to Walking With Elephants, some of them went viral. They were definitely doing damage without press or radio plugging. It was always in my mind to do something solo.

Congrats on winning the MOBO - how does it feel to win?

It’s pretty cool. These are the shows we grew up watching. Destiny’s Child, Jay Z, Beverly Knight, they’ve all attended and won so to be put in the same category as those guys is incredible. To win similar awards as them is surreal as I put them on a pedestal through their performances and music.

Has life changed since you won?

There are a lot of people now talking about my music, who previously weren’t. My song got played on The Only Way Is Essex recently. That’s a measure of ‘making it’.

I’m working towards my debut album so I’m writing the follow up and working on that. I’m excited. I got collaborations with a bunch of people, plus some dates abroad. I want to do some more TV stuff, I did the music for a show called Chewing Gum which was a lot of fun. I’d like to do some more around that.

Any tips for emerging songwriter?

There’s like an inner child in everyone. There are ideas that comes to the inner child and the kid just says ‘yo - let’s do this, do that, let’s make the song from pots and pans’. It sounds dumb to listen to the kid but you have to, those are the exciting ideas. You need to explore them and don’t second guess yourself at any point. You also need to remember that it’s never that bad, that one big problem is a lot of small ones. The only difference between current despair and future happiness is time.

Visit Shakka’s website to find out more.
Features
Back to top