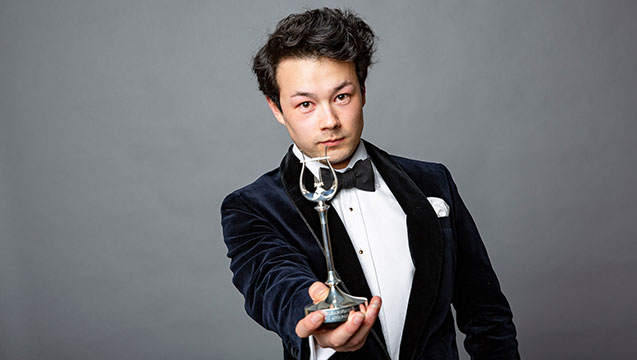 Uncompromising new classical force Sean Shibe on his creative vision and how global politics and everyday violence are changing the way he tackles his craft...

‘I’m trying to be less afraid of being pretentious because if we’re not out there to change the world, then what the fuck are we trying to do?’ says Scottish guitarist and composer Sean Shibe.

As an uncompromising new classical force, he’s riffing on the chaos and calamity of our times to push his instrument into pioneering new shapes.

Over the years, Sean has been influenced by the contemporary classical repertoire of Europe alongside the avant-garde jazz of his dad’s record collection, growing up on a worldly-wise diet of sound that defies pigeonholing.

Coupled with his astute reactions to world power politics and the everyday violence that now permeates our social narratives, he’s harnessing these stimuli to pour fresh thinking onto his music.

We caught up with him recently, after he picked up the RPS Young Musician Award, sponsored by PRS for Music, to congratulate him on his latest accolade and learn more about his unique creative vision…

A clean mix of avant-garde jazz, usually Sun Ra, also John Coltrane and socialist mining songs from Scotland and the North East. I also got into things on the zanier edge of Classic FM’s remit. My dad was really into all of that.

What led you to classical guitar?

Coincidence. There was a shop on the way to my mother’s work. She saw it and we thought, why not? My sister did highland dancing and I did the guitar. It’s quite random. My sister is the one person that’s have a formative effect on me musically. She’s been my rock through my whole experience of this business in a really powerful and profound way.

I think it’s probably because she doesn’t let things go – you’re always reminded of how to do things better. It’s that persistence and bloody-mindedness which makes you consider what you’ve done and your mistakes. It gives you a stronger sense of civic duty and how that bleeds into your artistic life: life as an expression of art rather than the other way around.

How is your style evolving as you get increasingly involved in music?

The guitar is very susceptible to more populist directions and I’m veering away from that. There are acts of unspeakable violence everywhere, as portrayed by the media, alongside the issues of Trump and Brexit. We need to speak to higher goals and move in different directions to reflect, and to understand how to manifest that reflection.

The guitar usually does, for example, Spanish music, but I don’t feel that adequately reflects the pain and chaos. I’m trying to find out what I feel does express that authentically. So, there’s a direction of travel towards somewhere less conventional, but I’m not sure there’s a destination yet. It’s about expressing the indelible atrocities of our time. I’m trying to be less afraid of being pretentious because if we’re not out there to change the world, then what the fuck are we trying to do?

How did it feel to win the RPS Young Musician Award?

It was awesome, especially as you see the success of others who have traversed more populist directions. It makes you feel as though the more obscure direction you’re taking is perhaps less rewarded, least of all physically. So, to receive this kind of recognition is an encouragement that what I am doing is important and people do value it. Without that recognition, one wonders how many people would continue in these directions. We have to be grateful for these things as they come along and the positives they bring with them.

My first guitar teacher Allan Neave and my current mentor Paolo Pegoraro. Allan always left all options on the table, and I think that was really important. Often the best things a teacher can give you are the things they don’t know they’re giving you – they don’t understand the power of the echoes of the words they have spoken.

What advice would you give to upcoming classical musicians and composers?

If you ever think of not doing this, then don’t do it. Always keep that in mind, because you probably shouldn’t do music if you’re thinking of doing something else, and if you’re constantly aware of the possibility of not doing this, then you’ll have greater artistic goals. It’s like the freedom that exists in nihilism. People think of nihilism as the philosophy of despair, but I think it’s a mechanism for genuine interpretational liberation.

I’m releasing an album on 21 September of interpretations of early Jacobean manuscripts on electric guitar and probably recording a few more things for the fabulous Scottish label Delphian. I’m popping over to Rhode Island for a festival in July, plus performing at a few things in Ireland, Italy and Norfolk.