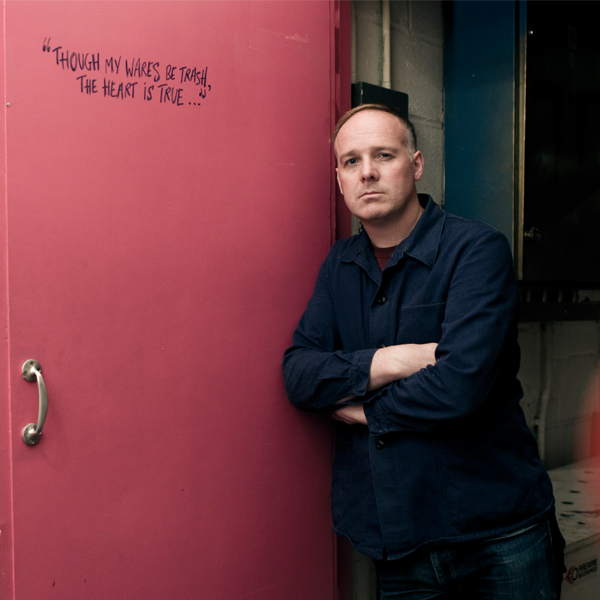 London-based DJ and producer Scott Fraser is one half of the brains behind hot new electronic label Crimes of the Future. He tells us how he’s got his musical mojo back…

London-based DJ and producer Scott Fraser may currently reside in the capital but he first found his passion for all things which go bleep in the night in Glasgow.

Cutting his teeth on the city’s frothy club scene and passion for all things Chicago and Detroit, Scott rose to prominence as a member of Bios alongside Alan Baxter and Peter Walker. He eventually left Scotland, upping sticks to London and taking a break from all things electronic.

Leap forward to 2015 and he’s now firmly back in the game. As a producer he’s been toiling in the Scrutton Street studio, home to Andrew Weatherall and his Crimes of the Future co-head Tim Fairplay. As a DJ, he’s become an increasingly important figure at the low slung end of techno, with a label night in Glasgow and appearances at the capital’s more discerning late night spots. With a slurry of releases around their collective belt (and plenty more in the locker), we find out where Scott and his machine funk are heading next…

I always had an interest in music but I think my parents thought it would be a passing phase. Although I’m obviously still doing it! The first record I bought with my own money was by Ian Dury and the Blockheads.

What turned you onto beats and bleeps?

I used to love rock music as a teenager, as many do. But I got bored with it, probably to do with the lack of women in rock clubs. I used to buy records at this shop in Glasgow which was predominantly rock but they started to stock some very early Chicago house. I started buying a few records, and ended up completely losing interest in metal, then became fully immersed in electronic stuff.

How did you end up producing your own material?

I had a few mates who were into it - between them they had a couple of bits of keyboards knocking about. I hadn’t really come across them before. I’d played the drums at school, a bit of guitar. But electronic drum machines, some other bits of gear, I got really excited by what you could do with them. I taught myself.

At which point did you realise you were onto something with your music?

We were working at a studio funded by the council in East Kilbride which is where I was brought up. We thought we could start doing music properly but the guy who was working there didn’t have a clue. He was more used to working with guitar bands and electronic music was still in a very early stage at that point. He was trying to engineer these tracks for us but nothing happened with it.

As a result, I decided to teach myself with a shitty desk. I was into the Chicago sound and the more banging stuff coming out of Detroit. At some point, it just came together. It didn’t sound like anyone else emerging out of Glasgow at the time. It was a lot rougher, a lot harder. There was a lot of fantastic music in Glasgow back then and there still is, but we were rougher and we liked that.

There’s been a lot made of your musical hiatus - what made you stop producing and how did you get back into it?

I got to a point where I was just fed up. I wasn’t into the gigs I was doing at the time and became jaded. I had a lot of personal things going on. That didn’t help.

I always had the studio gear in the house so didn’t totally stop. The other thing was, I started getting more into non-dance stuff in the house. I used to spend 3-400 quid a month on records and I ended up cutting back so I wasn’t getting through anything like that. I also moved to London - I loved Glasgow but just needed a change. I’ve still got friends there, do a club there but personally I needed to be somewhere else.

London is a very dynamic, exciting city, a lot of history. When I came down, I got into dance music again. I went to World Unknown run by Andy Blake and Joe Hart, went to Joe’s Bodyhammer night too. These nights got me back into enjoying clubbing and DJing.

How did you end up working down in Scrutton Street?

I’ve always been mates with Andrew [Weatherall] since the nineties. When I came down here he was kind enough to offer me a room in his studio. I spent a year and a half writing music, finding my feet again and just focusing on making stuff.

When I went down there, they had so much old gear and I really enjoy the hands on side of it. I’ve found my way between using a computer and working on a big analogue desk but I basically work in a live way still. That just coupled with my new surroundings, being down there with Andrew and Tim, it’s very inspiring. We’re all music lovers, doing stuff separately or together. It’s like a potting shed for like-minded people of a certain age to make music, rather than just a studio.

So you met Tim down at the studio?

Yes Tim had a room down there. Andrew needed someone to do his engineering work. Tim started doing that. I took a little room at the back. It’s been a recording studio for a long time. We had a very similar taste in music which is probably why we’ve ended up doing what we’re doing together.

Crimes of the Future has been far better received than we thought it would be. And we’ve got a lot going on with it to the end of the year. Releases from the likes of Perseus Traxx and Haunted Doorbell. I’ve also got another label and the first release comes out in May - the idea behind that is around more house and techno. It’s only going to be material I’m involved in and on limited vinyl. I’m hoping to put out five releases this year, as well as working on a longer format with more experimental stuff. There’s also the club in London with Bodyhammer and we’re doing Crimes in both Glasgow and London. It’s looking pretty hectic for the rest of 2015…

Scott plays Tusk at Dalston Superstore this weekend and a Crimes of the Future showcase in London on 25 April. Check out the ace Tim Fairplay remix of Scott's A Life of Silence below...