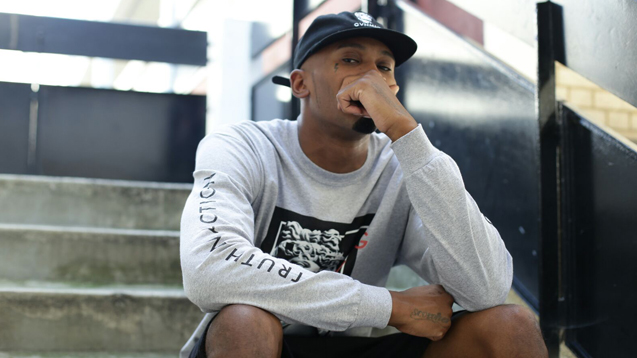 Multi-talented MC, producer and actor Scorcher is one of UK grime’s originators but, after more than a decade in the game, his music and style is still more relevant and on point than ever.

Initially he spent his day’s as part of the Cold Blooded crew, before joining The Movement, one of the most monumental grime collectives of all time, with other key members including Wretch 32, Devlin, Ghetts, and Mercston. The crew members rose together and also carved their individual routes in the grime landscape.

2016 has been a busy one for Scorcher not only starring in indie film, The Intent, but releasing the killer 99 Riddim (My Ting) featuring Ghetts and Mercston. Next year is set to be even bigger with an album and more acting work in the post. We find out more on his grime roots and how a stint behind bars helped him realise that music was the answer in our new interview…

For me it was more of a cultural thing, a way of life. Making music was something that me and my friends did socially whether that be MCing in the playground or the class. I used to get told off for writing lyrics in the back of my exercise book.

Who were the first artists you were into?

I’ve always been into a lot of different sounds, drum n bass, UK garage, speed garage and all the different variations, progressions of this music, all the way up to grime. On the flipside, my family is West Indian so there was a lot of dancehall, rap in the house. We were kind of into everything really.

We just did it ourselves so we went to the market and bought Fruity Loops. I remember saving money up for a computer, then got a copy of this software that probably destroyed my computer when I think back. Then we went further and found a software recording package. We got it free, made our own records, got them cut on vinyl. That’s how we started. We did everything ourselves as for us, there wasn’t a different option. We wanted to make music as that’s what we liked to do. We didn’t know about studios and things like that so we just did it our own way, kept it moving.

Did you have any musical heroes when you started out?

Not heroes so much but there were people who inspired me. So Solid were inspirational, Heartless Crew, Pay As You Go, Roll Deep, Nasty Crew. They weren’t that far removed from us which made it seem realer. It gave me a hunger.

At what point did you realise you were onto something with music?

There was a stage where I was going through certain situations and some of my friends were into different things. It became apparent that how we wanted to spend our time and money were different. I found myself being drawn to music. I ended up in a situation where I ended up in jail. I released my first mixtape while I was in there and we sold hundreds of copies in the first week. I found out while I was behind bars and it made me realise, it was a moment of clarity. Music was for me.

You’re well known as one of the original grime MCs - how have you grown as an artist?

I like experimenting with different sounds, it’s led me to express myself with various styles. I’ve developed from being an MC to being an artist to now being an artist who can MC - that is where I am now. As an artist you can sometimes lose sharpness. It’s like being a footballer if you’re not playing at the highest level, you’re not as sharp as you used to be. I’m at a stage where I stay sharp, I stay active.

Are you working on an album?

Yes I’ve been doing a lot of recording, a lot of writing. I’m at this point where I’m just doing me, but the theme if anything will be getting back to the essence of both grime and myself.

Is grime in good health? Why do you reckon there's been a new love for the sound?

I just think swings and roundabouts man, things come, things go. What I like more than anything is the music people are making right now. You can make any song you like and people will decide whether it’s successful or not. That only leads us to a more genuine, less contrived sound. Suddenly the in thing is to be yourself, which is sick. Grime is the soundtrack to the streets, it’s the rawest you can get for how people are feeling and thinking.

Have you any advice for new artists?

Sign up to PRS, get on the website, read up, understand it, don’t mess about with your publishing, have a look. The internet is your friend.