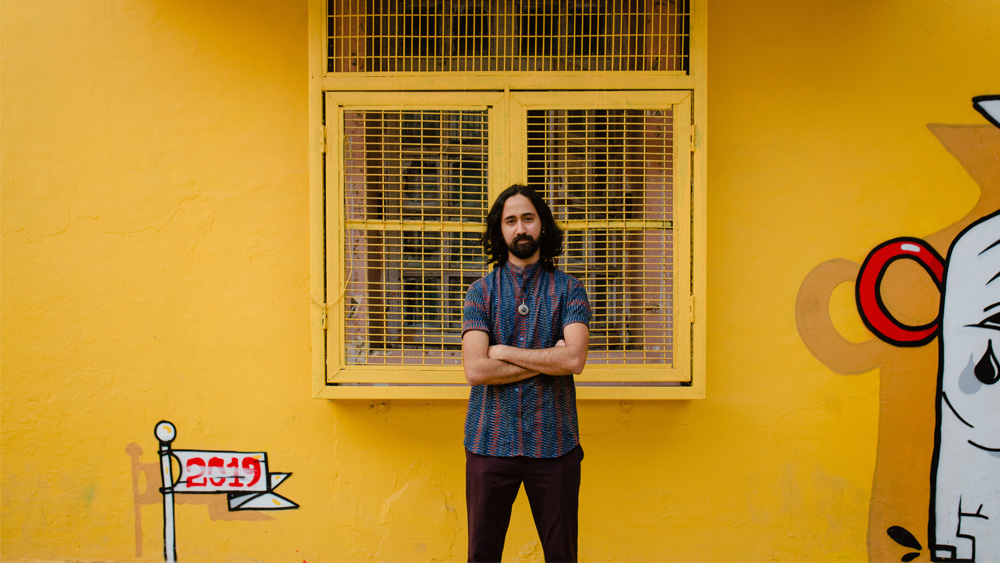 ‘Someone from a minority, if you’re putting out music, you’re already making a statement whether you like it or not’: says Sarathy Korwar.

Although his music is most commonly compartmentalised as part of a new wave of UK jazz, the album is a defiant riposte to such simplification.

Expanding on his debut Day to Day and the live album My East is Your West, he introduced hip hop into his already rich musical palette.

Nevertheless, while musically the album might suggest a harmonious cultural melting pot, thematically it challenges the politics of immigration and nationalism.

Tonight (Wednesday) he plays The Seabright Arms as part of The Great Escape’s FIRST FIFTY before heading for the Brighton-based festival next year.

Ahead of the show, we caught up with Sarathy to chat about the story behind More Arriving, why he has little time for labels and more…

I grew up listening to Indian classical music. There was a lot of Indian classical music in the house when I was growing up, in my early childhood. The thing that I engaged with when I was around 16 was rock and roll; Janis Joplin and The Beatles and The Doors and Jimi Hendrix. That kind of stuff. That led me on to blues and jazz and discovering a whole world of jazz. People like Miles Davis and John Coltrane, Bobby Gillespie, all those guys. That’s how it developed.

And how did you make the leap into making your own music?

At first, I was in a lot of bands – early 2010’s, that kind of period – and I struggled to feel like I was making my own mark musically, and not having much creative input in those kinds of situations. I think it just happened organically at one point. I had an idea for a project and I though, no one else is going to do this, so I guess I’m going to have to do this myself. Everything snowballed from there really, that’s what ended up being my first album, Day to Day. That idea that I had about recording some folk musicians form India and basing this album on their music. Everything went from there.

How do you think your music has evolved since you released Day to Day?

I think I’ve become a lot more confident in my own voice and my ability. So, what has happened from there to now is that I can hear the music is much bolder, and perhaps it has a louder voice. Sonically, things change but that’s just natural as things take their course and you develop your tastes – music and what you’re into at any particular time. But more than that, the individuality of the music connects more than it did with Day to Day.

It’s very mixed. I think each album I start writing starts with the theme of what it’s supposed to be thematically. It doesn’t start with music, for me, it starts with an idea. This one started with the idea that I wanted to present a diverse range of South Asian voices and that was the main thread that would connect all the songs on the record.

You meld loads of different sounds and styles into your work – is that a conscious thing or a product of your influences?

I think it’s a product of my influences and my reality. I try not to think of it in a very contrived manner. I just think about what I think is going to sound good on the record and what might add to a particular song.  I don’t try and think about making it more Indian or jazz or any of those labels. I just try and make whatever I make and then think about it later.

Who or what has been your primary influence over the years?

The title of your record refers to the movement of people, one of the most divisive issues of our time. Is it important that you make a strong statement with your music?

I think you make a statement anyway. I mean, someone from a minority, if you’re putting out music, you’re already making a statement whether you like it or not. The idea that you’re capable of putting something out that has a narrative and has been shaped by you creatively is in itself a statement. So, I think once I realised that there was no point in shying away from the fact that yes, there is going to be politics, there’s going to be a social message, there are going to be all these thing that are said about this record anyway. I might as well say it the way I want to say it, take the narrative in my own hands as much as possible.

And then it became about what I wanted to project outwards, what my concerns are, what I think and what I am capable of speaking about. It can only be my reality and with that idea of immigration and that idea of movement of people I’m hoping that will connect to a larger audience of people have been through different stages of movement in their lives.

In the UK music scene, do you think there is enough diversity and enough voices are being heard?

The biggest strength of the UK in general is the cultural diversity. There are so many people from all over the world that live there, which is why I wanted to be there in the first place. I think it’s more diverse than it’s given credit for. There is a lot of really interesting music happening.

What’s your take on the UK’s jazz scene currently?

I think it’s amazing. I draw a lot of parallels between the UK jazz scene and the Indian hip hop scene at the moment, because I feel like both scenes have a lot in common. They’re coming from predominantly working-class backgrounds, the people that are driving the scene. Young people, especially from minorities, are seeing people that look like them onstage and that’s incredibly empowering. I think there’s an amazing strength in that scene the UK at the moment. Two things that stick out to me are that it’s incredibly young and it’s coming from a working-class motivation. And that’s why it’s connecting to so many people outside of what we traditionally imagine jazz audiences are.

It also has to be said that scenes are manufactured. People make music and then they get called things. Scenes are manufactured by the music industry, by journalists, by record labels, by PR companies in order to sell the idea of music. So with my own music, I often called part of the UK jazz scene sometimes, depending on whose writing what article. I Often do get mentioned and sometimes don’t get mentioned. It’s really interesting to see how it develops and it all has to be taken with a pinch of salt, I think.

The thing that I lacked the most when I was coming up was confidence in my own ability. The one thing that really helped me was hearing from people that had been in the industry a bit longer than me, tell me that my music was worth something, that it was worth listening to and that I should just focus on making music that I want to make. That’s incredibly hard.

What young artists should do is approach people in the industry that they look up to and try and befriend them. I think it was very valuable to get the affirmation that I got from people who I looked up to. I think it can be incredibly difficult making music anyway, let alone when you’re just starting out. Self-doubt and being vulnerable in music is very hard and takes a lot of courage. Well done anybody who is setting down that path [laughs]. Trust yourself and do it and don’t compromise on it.

You’re playing FIRST FIFTY and The Great Escape next year: what are you most looking forward to about playing the festival?

What else do you have lined up?

I’ve started working on a new album already. It’s early days, but I think my album’s going to focus on a future utopia, in a sense. On the future of South Asia, like what is South Asian music going to sound like in the future, maybe in 2050? I want to write an album that’s based on a futurist utopia. I think it means rethinking some really fundamental ideas about music: what is music for in this future utopia? what does it sound like? what does it look like?

More Arriving is out now via Leaf Label.