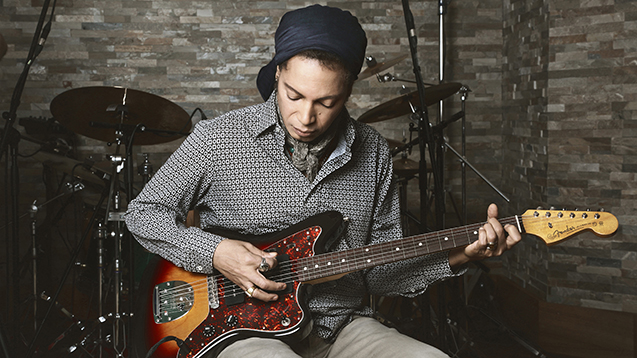 The artist formerly known as platinum-selling eighties pop star Terence Trent D'arby chats about the Greek mythology behind his new album and his pop star heyday...

'Quite frankly, I have lived Prometheus’ story, so I am quite familiar with it, as well as enabled by it.'

Sananda Maitreya – the artist formerly known as platinum-selling eighties pop star Terence Trent D'arby – is talking about the personal connection behind his new album, Prometheus & Pandora: a three volume epic centered around the Greek mythology of its two protagonists.

As the mythology goes, Prometheus was the mortal creator who stole fire from Mount Olympus and gave it to mankind.

'He took no bullshit, he was moody, he was aggressive, yet as a visionary he not only sees, but creates', Sananda explains. 'He’s the male energy, he was bipolar and he was punished for what he did.'

If Sananda has lived Prometheus' story, it's clear that he sees his punishment as being his fall from the music industry. At the top of his game, his debut album sold a million copies worldwide within the first three days of going on sale, but by album number two, he was making less of a commercial impact.

'I was destined to be a sacrificial lamb,' he says of the decline of his pop star heyday.

Regardless, as Terence, he left five boundary-pushing albums in his wake, and now, as Sananda (a name change made legal in 2001) the ambitious Prometheus & Pandora marks his seventh release.

The triple disc is a treasure trove of tracks about the human condition, taking in humour, wisdom and heartache.

Dolce & Gabbana model turned singer Luisa Corna provides Pandora’s vocals, while each volume contains a version of Andrew Lloyd Webber and Tim Rice’s I Don’t Know How To Love (Him), a classic that Sananda has 'wanted to cover it since I was a little boy.'

Here, we chat to Sananda to find out more about his 'post-millennium rock' and his career to date...


You’re the sole producer and player on Prometheus & Pandora. Was it important to have full artistic control?

What is most important is following one’s inner direction. Were it not important to be the main operative behind the project, I wouldn’t undertake to remain so.

A project always incubates for some time before being approached, and as I imagine a pregnant woman knows when the baby announces its immanent arrival, an artist knows when the project calls to commence.

For me almost everything associated with me tends to begin midway through the previous project, and once I arrive at the title,  the project in earnest begins taking shape.

There are few things in life that I enjoy more and feel that I have earned more than taking control of my own vision. If I do not require another, I do not spend my time looking for what I already have. It is one reason I can work so fast, consuming less time and resources.

Some of my more capable friends wouldn’t dream of working in such isolated conditions, not necessarily because they are not physically capable, but because they require and appreciate more social interaction. Meanwhile I cherish working with as little interference as possible.

What draws you to Greek mythology?

First off, the simplest answer is that like most writers, I am a storyteller. What draws me to Greco-Roman mythology is the very same impulse that keeps our Western civilizations connected to them.

For me, they are mythology in name only, and are in fact the literal history of our human timeline and the consciousness that nurtured and inspired it. I include our Egyptian, Sumerian and Babylonian stories beneath this umbrella also.

And, quite frankly, I have lived Prometheus’ story, so I am quite familiar with it, as well as enabled by it. Since first having my memory triggered by Prometheus as a child, I knew he was my guy and that I too was called to live out life as a native son of his legacy.

Was it important to present the two personalities of Prometheus and Pandora? And do you feel this was drawing on your own experiences as both your former identity and Sananda?

In these aggressively misogynistic times, it was important to include the visions of the archetypal goddesses and their own singular contribution to our collective psyches.

We all have at least two essential personalities, and anyone who says different simply hasn’t been paying much attention nor have they yet awakened to themselves and the processes that interact with life.

What are you obsessed with right now and what’s inspiring you?

My obsession has always been and remains the same: to return to Zooathalon on my own terms. Although I benefit greatly from the fact that it certainly needn’t be until after I leave this mortal coil. Either way, I will return because the mountain is where I am from, where I was conceived.

Through hail, ‘sturm and drang’, hellfire and brimstone, I have never forgotten who my father is, and that despite having had me sacrificed, he greatly regrets that decision and in fact misses a large piece of his own heart in having banished me to the wolves of the wild.

I am, meanwhile, soothed by the grand works of the Promethean brotherhood that have preceded me and made life a more tangible, less odious proposition.

You’ve said you were maneuvered out of the industry as there wasn’t enough room for another black superstar, describing it as a ‘political sacrifice’. Can you tell us more about that?

The ‘black superstar’ thing has been a bit overstated. There can be no doubt, however, that the math is simple.

One of the problems they had with my profile was that it refused to stand still and be given how a ‘black artist’ was supposed to project and act, thereby risking to give other ‘black dudes’ a different way of seeing themselves. Which as we know, is taboo and tantamount to treason, since any impartial observer can see that the majority of resources spent in this direction is the control and maintenance of black consciousness at all costs.

As a very mixed ‘race’ hybrid, I gave a shit about how I was supposed to behave and saw myself literally as much a white man, as a black man, as a native American Indian. This presented too broad an image for them to be comfortable selling back to the oppressed, whose minds they wished to keep.

So in summation, I was never going to participate in being sold as a ‘black artist’. It means shit and it pays even less. I am an artist, period. And one is either a superstar or not. What the hell was I supposed to do with a ‘black’ superstar?

You’re heading off on tour again. How will you revisit earlier material?

If anything I revisit, I am sure that the main difference is that I will be doing it a lot more deliberately and a lot more slowly...

Looking back at your career, is there anything you’d do differently?

It seems in retrospect that I was destined to be a sacrificial lamb and was even raised and groomed as such. I have bloodline connections to a LOT of bullshit that went down. So, knowing this, I was going to have to go through these fires either way.

Prometheus & Pandora is out now.

Photo by Michela Zizzari
Features
Back to top