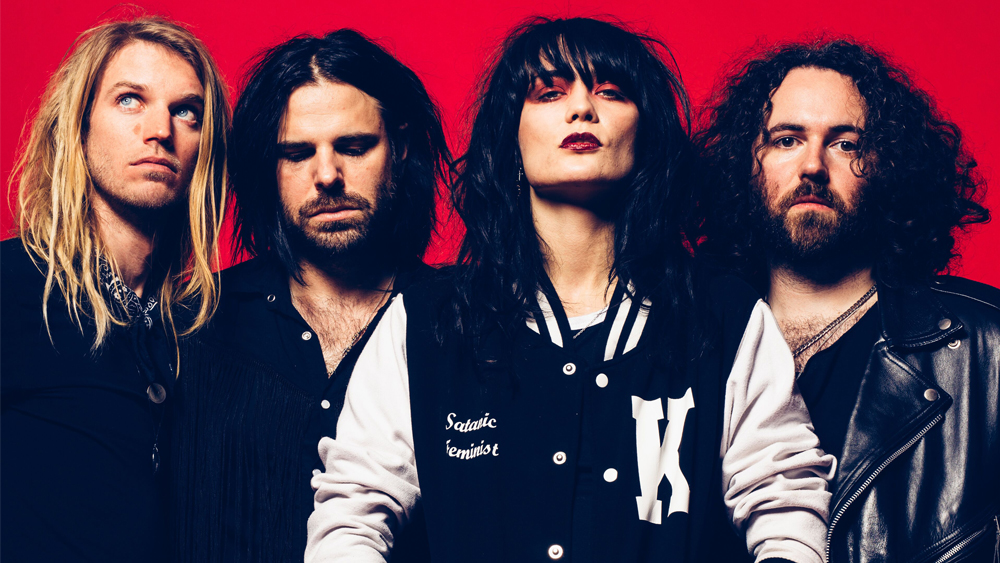 The four-piece rock band were formed in East London in 2014 after Jon and Kitty Arabella Austen discovered a shared musical belief in the power of rock and roll.

They later recruited Ben Chernett and Andy Head and hit the live circuit hard, clocking up over 200 shows in their first three years, and capturing their stomping, scorched earth garage rock on their debut single Old Bone Rattle.

A string of singles followed over the years before the band released the Death or Glory Gang EP in 2018 and this year saw them release their much-anticipated debut LP Welcome to Silvertown.

Named after the area in East London where the band formed, released via their own label, recorded in analogue and self-produced, the album was an example of the band’s fierce independence.

Here, we chat to Jon and Kitty about the band’s origins, what drives their self-sufficiency and what’s next for the band…

Can you tell us a little about how Saint Agnes formed?

Jon: Kitty and I bonded over a shared love of bands with a true rock n’ roll spirit, something that we felt was missing from the London music scene then. The only bands playing with guitars were either shoegaze or retro seventies rock that seemed more like tribute bands. So, we set about creating the band we wished existed, talking for hours, trying to keep warm in Kitty’s flat in Silvertown and dreamed up Saint Agnes. We immediately felt like the weird kids at the party whenever we played and just loved it.

Kitty: Andy was a free-spirited surfer we’d met on the beach a few times. Quiet, intense and as it turns out a drumming powerhouse. Ben, we got talking to when he was playing blues sat on top of the narrow boat he was living on at the time in East London.

In the early stages, who or what primarily shaped your sound?

Kitty: In our everyday lives Jon and I have a tendency to retreat into our own minds. Real life can feel brutal and unromantic, lacking any of the magic that it seemed it might do as a kid. We want to be the most spontaneous, visceral version of ourselves and being on stage provides that opportunity. Each show is a fight against our own tendency to retreat, against other people’s views of us and in the early days against audience apathy. A good song or a good show is one where we feel we broke through and reached our primal selves and for a brief time felt truly alive. That pursuit fuels all we do.

What’s the thinking behind your debut Welcome to Silvertown?

Kitty: Living in Silvertown, more than anything, felt grey. It embodied the disappointment of adulthood after the anticipation of youth. At the same time, we were watching a lot of westerns and in those moments of high drama are created from simple tropes, to bring romance to what might be a very ordinary story. This inspired us to see our lives and our surroundings through the eyes of something like a film director. We created stories based on real life but filtered them through our passion for fiery music and saw that what came out felt like how we wished life really was.

You self-produced the record. Is it important for you to maintain certain levels of autonomy?

Jon: Trying to describe the sound in your head to an outsider is almost impossible. We wanted to create a record using old analogue means but people then assume you want to be a retro throwback band. That is not what we heard in our heads at all. We wanted to create something vibrant and thought the best way to do this was to be spontaneous, to remove thought and the opportunity to over produce by recording to tape. Doing that means you have to play live, together, the recording captures the performance in all its flawed glory and is a time capsule of that moment. Too many modern records are a result of art made by committee and lacks a vibrancy we wanted to capture.

We took a gamble and hired a studio with a two inch tape machine and got to work. I then mixed the record and we’re very happy with the results.

You also released it via your own Death or Glory Gang Records, what motivated you to start a label?

Kitty: We didn’t feel anyone quite got the path we wanted to tread, so just like with the recordings we figured it was easier to show rather than tell. We didn’t want to wait for someone to maybe hand us an opportunity, we just set about making our own.

You have a pretty heavy touring schedule – do you prefer playing live to recording?

Jon: Both those sides have different challenges and different benefits. They are so different that having both is one of the things that keeps being a musician fresh and exciting. We like both equally.

There’s a very strong visual element to what you do, how important is that to you?

Kitty: When we write songs Jon and I talk about the songs in very visual terms. Imagining a returning anti-hero coming into town ready to seek revenge. What lyrics might capture that or what sound? The visual part of what we do is right there in the music so is always going to come out in appearance too.

What’s your take on the health of live music in the UK currently?

Kitty: I can’t speak for the whole industry, we only see our part of it, but it feels like there’s a hunger for the live experience right now. We just throw ourselves into each show and don’t think too much beyond that.

What are you most looking forward to about Swn festival?

Jon: Playing a festival that is new to us and in a new area is exciting. We love the challenge of defying expectations. The line-up looks great and when there’s other good bands I think it only raises our game.

Who do have on repeat at the moment?

Kitty: I can’t get enough of Ho99o9’s first album. Also listening to Soeur too who’re supporting us on our UK tour. If you’ve not heard them definitely check them out.

Jon: The new Nine Inch Nails album has been growing on me and I keep playing a lot of Ho99o9 too. I’ve also been mixing some songs for other bands, one of them is Blackbird Hill from France, been listening to that a lot too.

What’s next for Saint Agnes?