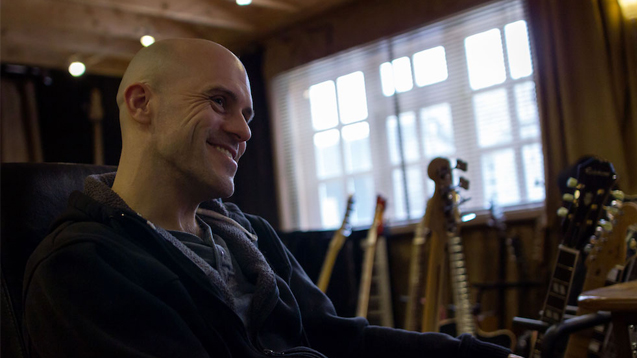 Nigel Powell is the man behind The Sad Song Co, an ace art pop project dreamed up amid stints drumming for Frank Turner - we get down to the creative knitty gritty as he releases new LP In amber…

Nigel Powell is the man behind The Sad Song Co, an ace art pop project dreamed up amid stints drumming for Frank Turner.

The record, a glorious art pop project, loosely based around stories of people in and around an old people’s home, was recorded in five days during 2015 with Graeme Stewart (Radiohead, Jonny Greenwood) and George Shilling (Stornoway, My Bloody Valentine). Funded by a PledgeMusic campaign, it’s arguably Nigel’s most coherent and powerful work yet following music with post-Britpoppers the Unbelievable Truth and rabble rousing Frank. That’s the album is so good is testament to his creative potency and ability to be prolific in his busy schedule - we find out more about the man and his music...

My older brother played guitar and needed a drummer. Our house was burgled when I was 11, and rather than replace heirlooms my brother convinced our mum to buy me a drumkit instead. I didn't even really want it that much then, so I have my bro to thank.

Who or what inspired you to start writing your own musical material?

I started writing very early in my musical career. I remember before I'd had any piano lessons I would sit banging away making stuff up that sounded good to my ears. I wrote some lyrics for the band I was in at school with my brother, and not long after bought a Portastudio and started writing complete songs, but never with any intention for them. For a long time I was happier being a contributor, just having those songs as my own personal archive.

What was your big musical break?

It's been more a series of smaller breaks. I do look at people sometimes and wonder how it must feel to have that KaBoom! moment. After school I toured a lot with the band I was in, when that split I took some time out from drumming, opting to do lights (my other big passion) for some school friends of mine who'd just been signed with their band Radiohead, thinking it might be a fun couple of months. They then had a big hit in the US with Creep and it turned into 18 months of touring before I got up the courage to leave and go back to making music. I was in Unbelievable Truth who signed to Virgin in 1997, and we had a good run with a couple of albums before the singer left to go back to enjoy a more stable life. After that I joined Dive Dive who had some indie success and toured maniacally, during which we crossed paths with newly solo Frank Turner and offered to help him out with his first EP, album and touring. From there it's been a very gradual climb to where we are now.

In amber is your forthcoming record – what was the aim? What themes and ideas did you hope to explore with it?

The thing I really desire in music is an honest, potent connection of some kind, so I had to write about things I was feeling, and getting older, mortality and legacy were on my mind. I wanted to avoid the singer-songwriter ‘me, me, me’ trap, so I used the framework of writing about people in an old people's home as a way of hopefully skirting cliché pitfalls while still addressing what I wanted to.

How has the music industry changed since you’ve been part of it?

For better or worse, since I started the emphasis has moved on to live performance more. The idea of a studio boffin who can just survive by making great albums every three years seems to have disappeared - there needs to be the live experience bringing in income. But then again, it kind of seems the same. You have big companies who need hits, and the interesting undercurrents of people doing it on their own, or with smaller labels, and some osmosis between the two.

How has working with Frank Turner informed and shaped you as a songwriter and musician?

The most obvious Frank Turner influence on me as a songwriter has been, unfortunately, not having had the opportunity to do it for eight years because our touring schedule has been so uncompromising! On the positive side though, working with someone who I consider to be absolutely the finest lyricist of his generation can never fail to be an inspiration. I don't aspire to write lyrics like his, but it is a constant reminder to worry and nag over every syllable and allusion until it works from macro down to micro. I don't think I'm there yet, but I'm practicing!

Feelings, and how sounds shape and amplify and mould them. I don't feel like a song exists until it has a central theme, or moment, or feeling. Up to that point it's just a collection of chords. Once you identify that kernel that's within it, that definition, then it unlocks it.

Have you any advice for new/emerging songwriters?

Be wary of advice from people who've been doing it for years, because it may be refracted through the prism of jaded bitterness! I consider myself still learning as a songwriter anyway, so I would balk at standing at a pulpit of STRUCTURE and FORM and trying to tell someone what they should do. The only advice I'd be comfortable giving is listen to yourself objectively. Sometimes if you step back and listen, instead of intently creating, you can hear the song telling you which way it wants to go.

I'm touring when I can with The Sad Song Co., but there's the inevitable wall to wall gig schedule with Frank that it has to fit in with. We're planning another record with Frank and The Sleeping Souls that will happen in 2017 sometime. But I'm also excited about the material I have for the next Sad Song Co. album as well, so I'm determined to fit that in at some point. At the moment I'm enjoying the creative momentum.

Check out tour dates for The Sad Song Co.

Listen to Legacy of Love from In amber.