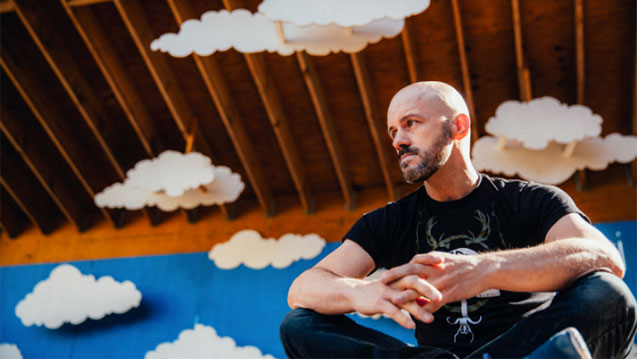 'When making music, you have to listen to what the flow of creativity is demanding': Frank Turner and Dive Dive band member Nigel Powell (aka The Sad Song Co) on writing solo and his brand new LP...

Launching his career in nineties’ alt-rock troupe Unbelievable Truth, he’s been steeped in music for over two decades.

More recently, Nigel has been drumming in Dive Dive and with Frank Turner’s well-oiled touring gang.

These experiences have taught him how to connect with audiences, hone his craft and subvert the norm – a solid schooling that’s helped him deliver two knock-out solo albums.

The latest instalment, Worth, drops on 9 February, and promises a feast for the ears.

Bringing together electronic production with potent lyricism, it offers a study into the minutiae of life, friendship and, funnily enough, self-worth.

What’s the thinking behind Worth?

It hadn’t been long since my previous album In Amber, but with another break in Frank Turner’s touring schedule, the songs started coming. Even though this time I didn’t have a theme in mind the album seemed to coalesce around the idea of worth - my worth to the world, to other people and my family, what love is worth, the value of collective action. I guess that’s what I was thinking about while I was writing! Even the songs co-written with Chris T-T seemed to gravitate in that direction.

When and where was it put together?

Most of it was recorded in the spare bedroom of my house near Oxford. The way I work, demoing flows into recording as a kind of continuum. As I’m getting my ideas together of how a track should sound (the arrangement and production are as important to me as the writing) some parts will be discarded, while some will survive as a first draft all the way to the final mix. I spent a day in Woodworm Studios doing drums and some other bits, working again with superlative Radiohead engineer Graeme Stewart, and then brought in my excellent friend Chris Kasych, who’s worked with various other unknowns like Adele, Bruce Springsteen and Neil Young, to mix.

Your live sets are normally fairly minimal – how does your recorded output differ?

Because the band is mostly just me when I play live, I perform stripped down versions of the songs. But on record I take great joy in the full arrangements. This time around, electronics and programming had more of an influence than before, but at the same time there were a lot more guitar solos. I love writing those, weirdly, but I brought someone else in to play them, since I’d created parts that were a little beyond my skill level to pull off confidently...

How has performing live as a soloist and in bands informed your sound?

Touring as much as I do has focussed me for a long time on the communication of the music. I love listening to very arty stuff, but I don’t think it would be in me to create it, because I want to speak to people, emotionally and clearly and welcomingly.

When did you first start writing songs?

I’ve been writing for as long as I’ve played instruments, starting with piano when I was eight. Despite making solo demos ever since I’ve had the opportunity to do so, it wasn’t until I was in Unbelievable Truth that I started considering myself a ‘songwriter’ though. I still prefer collaboration, but the last two The Sad Song Co. albums have finally made me feel relatively confident in my skills on my own.

You’ve performed with Frank Turner, Dive Dive and Unbelievable Truth over the years – what have you taken away from each experience?

Frank Turner and Dive Dive were/are both very hardworking outfits. I really love applying myself and putting the hours into something. Frank and Jamie from Dive Dive are both very inspiring lyricists as well, and have pushed me to try and improve myself in that direction, take more care over the shape and the imagery and the communication.

Unbelievable Truth is a band I am still very proud to have been a part of, making albums and performing with two of my very best friends in the whole world, and really appreciating how to arrange and write with subtlety and understatement.

What’s the best bit of musical advice you’ve ever been given?

Listen. It’s so important, but covers so much ground. As a player you should have your ears wide open to everything that everyone else is doing so you can react musically and emotionally to every moment.

When writing you have to listen to where the song wants you to go - not what chord you can play next or a trick you want to pull off, but what the flow of creativity is demanding. And to everything going on around you - there’s so much amazing music everywhere in the world at every level. It’s a fantastic joy!

Who or what has been your biggest inspiration?

Being friends with (and briefly in) the guys from Radiohead at school, and watching close at hand as they took what they were doing and made a success of it did plant the seed that if you do it, and do it well, you can take it out to everyone who wants to hear it. It took me about 15 years more to really make it happen, but as luck would have it I’m incredibly stubborn and refused to quit even when it was blindingly obvious that I should!

First is the release of Worth and a UK solo tour. Beyond that the seventh Frank Turner album comes out in April and we start another mahoosive touring cycle which will then hoover up most of this year and some of the next!

Worth is released on 9 February.