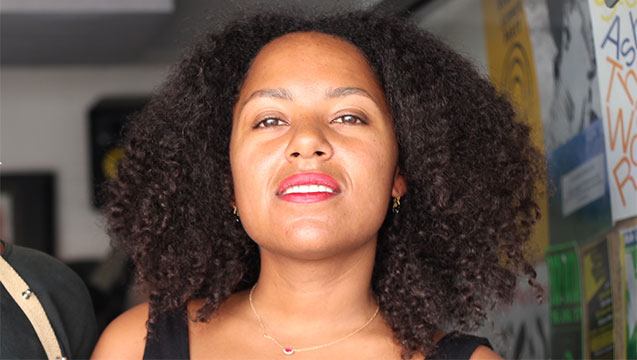 'People are getting bored of soulless computer sounds - they want real life experiences and solid musicianship' Brownswood Recordings' Ruby Savage on where it's at in 2018...

Alongside being into all things beaty and bouncy, British-Surinamese DJ and record collector Ruby Savage is Brownswood Recordings’ label manager.

Through the label, she’s worked with some of the UK’s most eclectic new musicians, including jazz wiz Zara McFarlane, Skinny Pelembe, Anushka, Henry Wu and Yussef Dayes.

Since relocating to London in 2007 from her Amsterdam home, Ruby has also worked behind the counter at iconic West London record emporium Honest Jon’s and managed the Sounds Signature label alongside Theo Parrish. She also helms the Wildheart imprint, which she co-founded with him.

As a DJ – known as Kwasiba Savage - she’s hosted parties across the capital and beyond, including her boisterous In Flames post-punk/freaky disco night, and helms regular shows on NTS and Worldwide FM.

Here, she lets us in on the sights and sounds that have defined her style, and proffers some pearls of wisdom on why the UK’s jazz scene is currently tearing up the international airwaves…

What was the first song you remember really connecting with?

Michael Jackson’s Thriller. At about three years old, I was completely mesmerised by the song but simultaneously too scared to watch the video... I became obsessed, hah!

What track gets you moving every time you hear it?

When did you discover you wanted to be a DJ?

To be honest, I think it was my friends that discovered this before me. I always thought myself more of a dancer than a DJ but at my or mates’ house parties I’d get well into playing the tunes. This encouraged me to start playing at proper parties. Alongside that I started doing my own radio shows and from there it’s been a knock-on effect… I play music that I absolutely love. Seeing people react to my sets is what keeps me hooked.

In terms of your style, who or what has shaped you the most over the years?

Other than my mum raising me on a really wide range of music, moving to London from Amsterdam 11 years ago has had a massive impact on my style and music taste. The first thing I noticed and instantly loved is the deep musical history and knowledge you hear in London local DJ sets. I feel like their sets reflect this melting pot face of the city.

In a regular set you’ll hear anything from a rare soul cut, to experimental jazz, to eighties house tracks, coupled with West African rhythms to a new broken beat anthem. Somehow they make it all connected and I rarely leave a dance uninspired. It’s really special and has influenced how I play today. Oh and London’s got the best punters too! They know their tunes, they know their moves, but most of all they are incredibly open. Dancers aren’t shy of a tune they don’t know or unexpected turn of direction. Long as the groove’s there, they will dance.

You’ve worked with loads of amazing artists via your role at Brownswood – which experiences have meant the most to you and which projects are you most proud of?

Pretty proud of all of them to be honest! I’ve been lucky to arrive at Brownswood when so many amazing artists were being signed. In particular the We Out Here project was amazing. It's been great watching them all do so well. A funny memory was the time I had to pick up Yussef Kamaal’s Jazz FM Breakthrough Act of the Year Award on behalf of them. At the time they were still quite an enigma as to who the band exactly was so I think I started off saying something like, ‘Hi, I’m not Yussef, nor am I Kamaal...’

Why do you think UK jazz is so buoyant at the moment?

I think people are getting a little bit bored of soulless computer sounds. They want real life experiences and solid musicianship. The UK jazz scene offers that. And since they’re able to translate live jazz to a dancefloor setting, it’s become a perfect storm.

I’d say so yes! Just last night I was at Ahnanse’s weekly Steam Down session held at Buster Mantis in Deptford. Towards the end of the night Kamasi Washington randomly showed up, made his way through a steaming crowd and effortlessly joined the band. Together with local talents Sheila Maurice-Grey, Chelsea Carmichael, Nubya Garcia and a whole bunch more, they tore the house down… I’m pretty sure phone numbers got swapped at the end of that, so that’s very exciting!

You’re at Appelsap later this week – what do you have in store for the festival?

Oohlala I’d like to bring a slice of London vibes but since Amsterdam is the city I grew up in and Appelsap is a party I musically grew up to, I’m definitely honouring that element in my set too. Warm, jazzy, fun vibes as I remember Appelsap festival to be.

What do you think Dutch audiences are getting most excited about at the moment?

I’m not deep in the music scene anymore but I can imagine grime and afrobeats doing really well in Holland. And I hope they’re ready for the UK live jazz invasion too! Looks like Appelsap is taking some chances and bringing quite a bit of interesting sounds over.