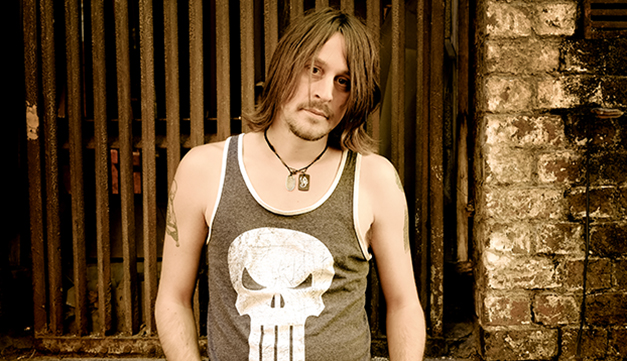 Multi-instrumentalist Ross Ainslie has become a flag bearer for Scottish trad music, helping breathe new life into the historic movement. Here he tells us more about the rise of the trad music scene and his first foray into songwriting.

Over recent years, multi-instrumentalist and composer Ross Ainslie has become a flag bearer for Scottish trad music, helping to breathe new life into the historic movement.

He’s also a skilled performer and prolific collaborator who plays regularly with bands Treacherous Orchestra – of which he is a founding member – Salsa Celtica, Dougie Maclean, Charlie Mckerron and India Alba.

Testament to his talent, he recently received PRS for Music’s Composer of the Year trophy at the MG Scots Trad Music Awards, while Treacherous Orchestra received the Album of the Year Award for their sophomore album Grind.

You won two awards at the Trad Music Awards this time – how did that feel?
It’s always a good night out – a bit like a work do. It’s nice to see people you haven’t seen all year. Receiving an award is quite like taking one for the team. There’s a real team spirit with everyone.

How did you first get into traditional instruments?
I didn’t mean to get into it – I was mad into football when I was younger. My friend went to the local pipe band and it just seemed like another thing to do so I went along and started learning the chanter. I did it for about a year and dropped it. Then I decided to go back to it and have individual lessons with an older guy in Perth called Norrie Sinclair. He was a really patient old man and great for bringing on new people. He said I should go up to a pipe band up in Pitlochry, which is a really good feeder band for youngsters. You can work your way up the ranks. The pipe major of the kids’ band was Gordon Duncan, who was pushing the boundaries of what pipes can do.

How was Gordon doing that?
People think of traditional pipe bands playing at weddings, but Gordon was playing with guitars and bouzouki and allsorts. I was only about 11 or 12, but hearing Gordon’s album Just for Seamus was a moment that my life changed. Suddenly I wanted to do music more than football. Me and Gordon became really good friends, along with Ali Hutton, and we spent loads of time together immersed in his way of thinking about the pipes. We’d be up at the house and he’d put AC/DC on and whistle at us to play along. We also listened to a lot of Irish music – everything – and he’d always get us to jam along. We wanted to be in a fusion band with pipes.

Is that the thinking behind Treacherous Orchestra?
Yes, myself and Ali moved into Glasgow and met all the Treacherous boys – there’s a big session scene in Glasgow we’ve been on for nearly 15 years. We’re all in the same mindset – we all play traditional instruments but we’re all kinda young and have younger influences we like to bring in. We fuse all that stuff with our traditional instruments. We’re trying to make it more accessible for younger people.

What does the old guard make of what you’re doing?
I’m sure the traditionalists wouldn’t like it, but generally people are into it. Folk music has changed a lot in the last 10 years - because of people like Gordon and Martin Bennett, and bands like Shooglenifty. It’ll change again in another 10 years I’m sure. It might go a bit more jazz. Folk is always going in different directions.

Do you think traditional instruments are becoming popular again?
Well, I was the only piper in my whole school and nowadays there are so many people playing. It’s become a cool thing to do, which is great because it’ll keep it fresh and alive.

You’ve turned your hand to songwriting recently – what was that like?
I stopped drinking three years ago and it was a big change in my life. I found myself having to replace drink with something else. I’d be at home a lot and not going out as much as I used to. So I’d come up with chords on the cittern, and normally where I’d try to pick out a melody, I thought about writing some words instead. It became a therapeutic thing for me. I had about three songs and got in touch with Donald Short who runs Celtic Connections Festival, and he asked if I’d do one of these New Voices CDs.

That was the Remembering album right? How did you go about putting the rest of it together?
Songwriting was so far away from what I would normally do, it was a big challenge. And I’d never done an album with a band completely live before so it was good fun to record. There’s a ‘making of’ documentary on YouTube you can see about it.

I’m not really a wordsmith, so that’s why I decided to go personal with the lyrics. It was good for me to do and I’m quite happy with the results – even though there have been both some funny reviews and people telling me they love it.

What’s next for you?
I’m working on a new album of maybe 35 to 40 minutes of music as one solid track – like a journey. I’m trying to do it all at home and record it myself. I haven’t done that before. It’s another good skill to have and it keeps the money down. It’ll be an instrumental album.

It sounds quite experimental?
Yeh, I’m not being too precious about it. It’s quite multi-genre!

What’s happening with Treacherous Orchestra?
We’ve got dates in the diary for May so we’ve been rehearsing quite a lot. But it’s a difficult band to get together because there are so many of us. It’s a nightmare. There are loads of ideas on the go but there’s no concrete material, which is quite scary seen as there’s dates in the diary! We don’t normally do it that way round. We’re thinking about doing some songs. We’ve got a few definite ideas.