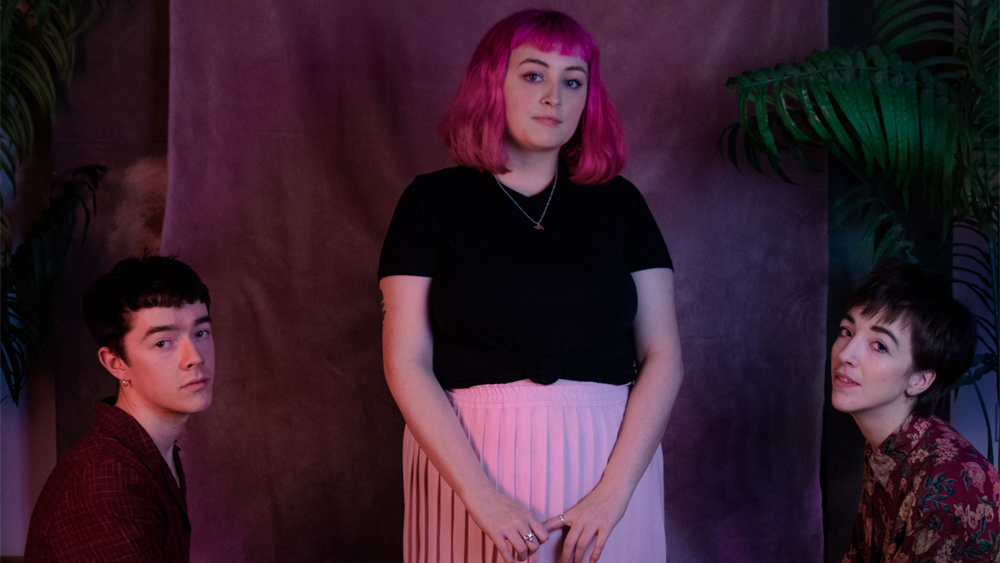 ‘Being a part of the DIY scene has been so important in feeling connected to other artists and such a lovely way to meet great people from all over the place,’ says Faye Roger of Rosehip Teahouse.

‘Being a part of the DIY scene has been so important in feeling connected to other artists and such a lovely way to meet great people from all over the place,’ says Faye Roger of Rosehip Teahouse.

Faye began Rosehip Teahouse as a solo pursuit in 2015 before she was later joined by friend Will Dickins (drums), who was immediately taken with the infectious character of the sparkling bedroom pop she was creating.

Soon after they formed a fully-fledged band with Tony Williams (guitar) and Kristy Cromwell (bass) and the four-piece’s more layered sound has swiftly begun to make its mark.

Recent single Same Sky has been supported by Huw Stephens at BBC Radio One and BBC 6Music, BBC Radio Wales, Amazing Radio, BBC introducing, and is sure to charm fans of artists like Jay Som and Soccer Mommy.

The band have also been selected as one of the 12 acts for this year’s Horizons/Gorwelion, which is a music scheme by BBC Wales in partnership with Arts Council of Wales to develop new independent contemporary music in Wales.

The rest of the year looks busy for Rosehip Teahouse as they embark on a series of high profile shows at Green Man Festival and Swn Festival.

Before they hit the road, we caught up with Faye to find out how it all began and to get her take on the DIY and independent music scene in Wales…

Rosehip Teahouse started out as a solo project, what compelled you to form a band?

I think when I started Rosehip Teahouse, I thought it would always be a platform to put my feelings out onto the internet and not really receive anything back, more as a process for myself. But then, when I met Will (our drummer), he was so supportive of the music and said that I should start seeing it as a 'real project' and it all kind of fell together from there.

You describe your music as ‘happysad,’ could you expand on that?

I think most of the content of the songs lyrically is quite sad, but we try and keep the music side of things a little more twinkly and upbeat where we can! So it can kind of fool you into thinking you're bopping to something happier if you don't listen to close to the lyrics, haha!

I always keep a notebook on me for lyric ideas! I write lyrics all the time and then tend to sit down with my guitar and patchwork them together along with chords to create the songs! And then I take that to the others for them to add their own thoughts and sparkles to.

What’s the story behind your latest single Same Sky?

Same Sky is me reflecting on a situation in which I thought I was deeply in love with someone. But they frequently dipped in and out of my life and expected me to always be waiting for them with open arms. Same Sky was the realisation from me that I didn't need to do that anymore and allowing myself to let them go, as well as accepting that I have no idea what the future holds and that I didn't need to be so terrified of that.

Is it important for you to maintain your DIY practices?

Yes, I think so! Being a part of the DIY scene has been so important in feeling connected to other artists and such a lovely way to meet great people from all over the place taking part in their own local DIY scenes. I think it helps to form a sense of community and also give you the chance to figure out who you are as an artist.

Who or what are your biggest inspirations?

This is tricky!! I think just before starting Rosehip Teahouse I got very very into Frankie Cosmos, Florist and Porches which really took me into the new realm of bedroom pop. In terms of inspiration for song content, I always write about personal experiences regarding the people around me in my life and also like to write about mental illness and my experiences with that as I think it's so important to share that with others and hope that it can encourage others to feel safe in doing the same.

You’re playing Swn later in the year, what can we expect from your show?

Yes we are! We may have had a slight shuffle around by then...new songs....new instruments….

What’s your take on the independent music scene in Wales?

I feel really lucky to be a part of the scene in Wales! I think there are a lot of great people involved and so much support from other artists and people in radio, promotors, all sorts! It feels like everyone wants everyone else to do as well as they can and boost each other up. It's a lovely thing to be a part of!

Yes! Hopefully! It might not be for a little while yet, but we're writing all the time and hoping that maybe early next year might bring a full-length release from us, with some other singles sprinkled around in the meantime.

What does the rest of the year have in store for Rosehip Teahouse?

We are super excited to be playing at Indie Tracks Festival and Green Man this summer! And then of course Swn too. Hoping to play a little further afield in the autumn time and get some more songs written, recorded and released too! It's just really exciting that people want to hear more from us and have been so encouraging! Still hasn't quite sunken in fully yet I think!