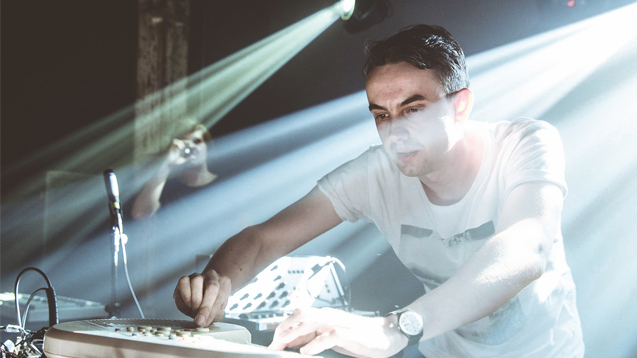 As a resident DJ at London’s Trash and Durr to producing and remixing for the likes of The xx and The Gossip, Rory Philips has always had his musical claws sunk into the more switched on regions of electronic music.

He’s always cut a distinctive figure as a DJ, playing many of London’s coolest late night spots using an old telephone handset as headphones. When he’s not behind the decks, Rory has been behind the Mixed Fortunes release series, while also working closely with Beth Ditto from The Gossip and Little Boots on recent material.

In between DJ dates and studio time, we caught up with Rory to learn more about his favourite gear, records and how touring with eccentric solo artist Whitey was both the best and worst time of his life…

How did you first get into music? What was the first record you fell for?

I grew up during the dawn of the music video so was very into AOR and pop music. I heard the intro to Money For Nothing and asked for a guitar that Christmas.

Who or what made you want to start making your own music?

More curiousity and boredom than anything else. I had guitar lessons as a kid but never really stuck at it. Then at 19 I picked up a four track tape machine and started experimenting with cheap keyboards, effect pedals and drum machines. I think I realised that layering sounds was of more interest than playing a single instrument.

Where do you like to record and make your music?

I have a studio in Hackney where I've been for the last decade. It's a grotto full of gear that doesn't quite work but everything plays its part.

When you DJ, which records do you always take to play out?

You’re well known for putting together for remixes - what needs to be in place for a good remix?

I've always tried to find the one thing I like most about the original, latch on and flesh it out. Often it's the vocal but sometimes it can be a single bar of a bassline or a rhythmic element.

How do you approach the creative process? Have you a way into your music?

I'm really applying myself to learning more and more about music theory but I'm not a traditional musician. Sound and timbre of synths and drums have traditionally been my starting points so often it's a case of just starting a step sequencer and seeing what today holds.

Whitey is one of my favourite artists - how did you find working with him?

He's an artist with an unconventional approach to music which I really like. We toured coast to coast in the USA without the glamour of a bus or bunks but when you cross America in a tiny van you get to stop and see things you would never see on a regular tour. It was simultaneously the best and worst time of my entire life.

Which remix has been the most satisfying to do? And why?

I think Units’ High Pressure Days. It's the one I'm asked about the most. It was pretty intimidating being such a fan of the original but Scott from Units was so encouraging throughout the process.

Do you have a favourite piece of studio kit?

Honky Tonk Klone Kit 2. An analogue drum brain seemingly made by a madman.

For new and aspiring producers, what tips would you give them? Are there any small ways in which new artists can enhance their productions?

More gear isn't the answer. You need to try and master the tools you have.

Are there any artists out there you’d love to collaborate with?

What’s been keeping you busy? And what does the future have in store for you?

Springtime is coming so I might plant a window box.

Visit roryphillips.com to find out more about Rory's current projects. Listen to Rory's remix of High Pressure Days by The Units below.