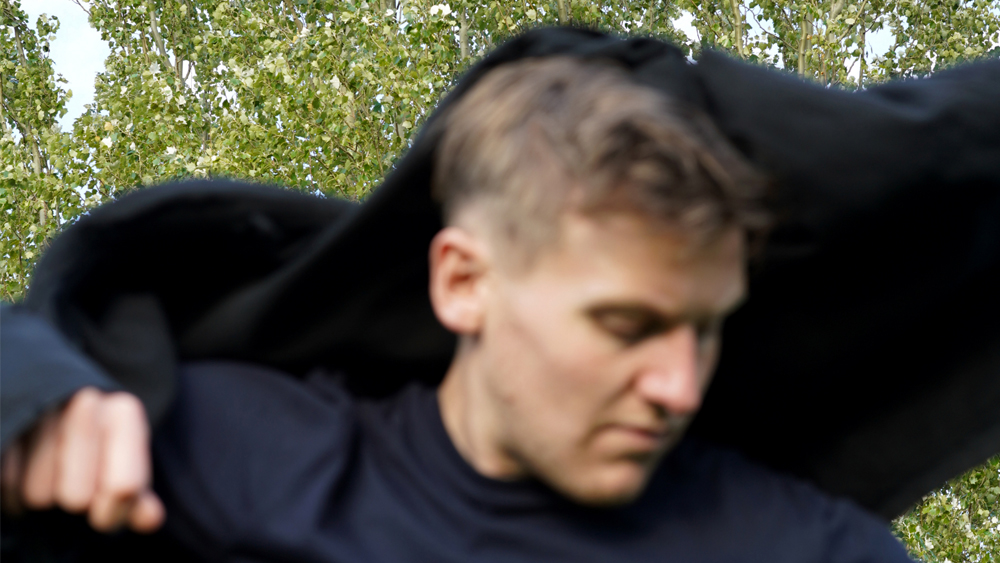 ‘There are no boundaries and there are no limits to what you can create with this art form’: composer and multi-instrumentalist Robin Richards branches out from his work with Dutch Uncles.

‘There are no boundaries and there are no limits to what you can create with this art form’: says composer and multi-instrumentalist Robin Richards.

And he would know, having recently created a techno banger from nothing but the sounds of a blacksmith at work.

Beyond his output with art-pop group Dutch Uncles, Robin has been exploring an array of compositional extracurricular activities.

He first dipped his toe into solo composition with Washington Trapeze, which debuted at Festival No. 6.

More recently he embarked on an ambitious project to commemorate the 200th anniversary of the Peterloo Massacre called From the Crowd.

Now Robin is preparing to release his debut EP, which features a stunning example of musique concrete, Gefail Yr Ynys, creating using recordings made during his artist residency at a forge in Caernarfon.

The release showcases Robin’s capacity for seamlessly combining different styles while drawing on a diverse range of influences.

We caught up with the composer ahead of the release of Castel to find out what drives him to make solo work, the thinking behind the EP and what he has lined up for the future…

What inspired you to embark on a solo recording?

I’ve been working on solo projects, as well as working on stuff with the band, for the last four or five years. I’ve done a few soundtracks and a couple of other commissioned projects. Then I got some interest from PRAH, which is an avant-garde subsidiary label of Moshi Moshi, who were interested in releasing my stuff.

Initially, I was interested in putting out some of my soundtrack work, but then they had the idea of releasing an EP, which would be more of an introduction to my solo stuff. It’s not too dissimilar to Dutch Uncles, but some of it is quite different.

How did your artists in residency role at the forge come about?

I was on the arts council website looking for different opportunities at the time. It was at a time when the band was quite busy, during festival season. But I wanted to see what else I could work on at the time and this opportunity arose for the artist residency at the Gefail Yr Ynys forge in Caernarfon, and I applied had the interview and got the role, which was great.

It was like nothing I’d ever done before, especially as it involved me going over to Caernarfon once or twice a week: working in the forge, working with community groups and putting together this music which made up the exhibition at the end of the residency.

Did the location feed into the EP?

Yeah, a lot. It’s amazing and only a two-hour drive to Manchester, so really easy to get to. My family are from Cornwall, so I’ve spent a lot of time in Penzance and that area of North Wales remined me a lot of the fishing villages in Cornwall where I spent a lot of time. So it’s almost like Home form home in a sense, but I could get there in a lot less than six-and-a-half hours. I already had an affinity with the place.

What’s behind your unusual approach to the EP’s title track?

When we first went there, we had a discussion: myself, Mike Murray, a visual artist and sculptor who was a local artist in residence at the time as well, and then Dylan Parry, who was the blacksmith there. We just started talking about how we wanted to work together.

Basically, I wanted to make music that would be a tribute to the industrial and maritime heritage of the town, but obviously spending time in the forge would be looking more at the blacksmithery in general. There was a session where Dylan was teaching people to craft stuff from iron and I just noticed that first rhythm, which is him banging iron into shape, a natural rhythm for him. He didn’t realise it, but it was 120bpm rhythm that I was hearing and I thought I could really do something with that if I record it.

It was a matter of spending a whole day with him and recording everything that he did in the forge, which gave me so many different sound to work with which became this techno piece.

How did you go about constructing the track from the samples?

It took quite a while, but I had that starting point. I was stopping and starting recording, so it wasn’t like I had eight hours of content. Once I knew that I had a certain timbre and sound to work with then I could stop there until I heard something different. I had it clearly sent out into different recordings, sperate WAV files that I could then layer and see how the rhythms could work with each other. I didn’t want to edit the sound too much, I didn’t want to add any effects. Obviously, there’s some mixing that goes on towards the end of the process, but it’s a pretty dry reflection of the sound that was there in the forge on the day.

The EP has a really diverse range of inspirations, from the Estonian fight for independence to Arvo Part, and two Welsh language songs. Is there a unifying thread that runs through the EP?

When I was asked to put the EP together, I thought it would be a good idea to make it more of a compilation for it to be an introduction to my solo works – all the different stuff I’d been working on over the last couple of years. The thing that ties all these pieces together is themes of community and togetherness. I suppose folklore as well which links the first track, the vocal pieces and the Estonian pieces as well. Then there’s the piece that I wrote for two marimbas, which is very obviously about togetherness as well.

Your solo work is quite a departure from the music you’ve made with Dutch Uncles. How would you describe your sound?

It’s quite difficult to put into a few words, but my approach to my solo work isn’t too dissimilar to the way I approach the band’s work; a minimalist approach that I start with and then just build from there. I suppose in that sense it’s quite linear. It usually builds in, hopefully, unexpected ways. I like to think that in those minimal aspects you can hear different things each time you listen to the music, the different rhythms or harmonies might appear when you listen to the music more than once.

Outside of your work with Dutch Uncles you’ve also branched out into composing for screen. What has that experience been like?

I’ve really enjoyed that. The first commission I got was in 2015 for Home, the cinema in Manchester for their opening weekend. I was asked to compose a new score for the film Lonesome, which came out in 1928. That was a completely new process for me, but I really enjoyed responding to the imagery and working in a completely different way.

Off the back of that I got to meet Clara Casian, a visual artist and we collaborated on Birdsong: Stories from Pripyat about the Chernobyl nuclear disaster. And again, that was a completely different process all together because that was more about working in collaboration. We’d bounce off each other and make sure everything fits together. It’s working in a way that the music isn’t just in service to the film, it’s also an integral part of the piece of art. I’m currently working on another project with Clara, so that will be coming out next year.

You were also was commissioned to be music director and composer for From The Crowd, an event commemorating the 200 year anniversary of the Peterloo massacre in Manchester. How did you approach the project?

That was the start of this year that I got that commission. I really wanted to do something about Peterloo, as it was coming up to the 200th anniversary I wanted to get involved with that. To get the commission from Brighter Sound was amazing. Like some of the film work I’ve done and the project in Wales, it was a really collaborative project. I was collaborating with Evie Manning, who was the creative director for it. She’s a theatre director normally, so creating the full day event, where I was in charge of the music, while she was in charge of a script.

I’ve never worked on such a full-scale event like that and it was amazing. We had about 250 volunteers working on it as well as several teams and Manchester City Council. A huge project and the event itself, we were all really happy with the way it turned out. It all feels like a bit of a blur now [laughs]. It was something I was working on for the first eight months of this year. It was an amazing thing to be part of and it was working in collaboration with people that I wouldn’t normally get the chance to was what I found most rewarding really.

Who or what is your biggest inspiration musically?

There’s quite a few composers and musicians that have been hugely influential. Steve Reich springs to mind as the biggest one, going back to what I was saying about having a minimalist approach to writing. Then artists like Kate Bush and on the other side Igor Stravinsky have also been huge in terms of seeing the vast potential that there is in terms of music creation. There are no boundaries and there are no limits to what you can create with this art form.

I’m currently working on this project with Clara. It’s a film about the Japanese Tsunami in 2011, but it’s more of a study into different ways of dealing with loss and grief in different cultures. We went to Japan in June to film and research for the project so as we speak, she’s working on the film and I’m working on the soundtrack. We’re going to be doing screenings with a live score in April next year.