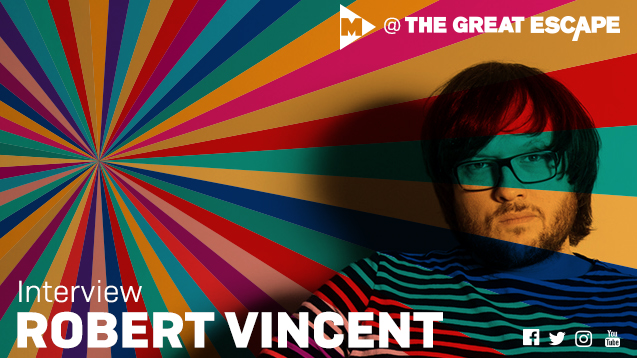 We quiz Liverpudlian Americana artist Robert Vincent on his songwriting past, present and what the future has up its sleeve for him and his music…

British Americana artist Robert Vincent has enjoyed a snowballing rise to acclaim over the last 18 months.

Accolades for him and his music have started to pile up at an increasing rate following the release of his debut album, Life In Easy Steps.

In February Robert won the 2016 Bob Harris Emerging Artists Award at the UK Americana Association Awards, then caused a sensation as part of a British invasion at the Americana Fest in Nashville. He performed a series of well received gigs alongside fellow PRS Foundation backed artists Yola Carter and William The Conqueror.

Since then, Mr Vincent has released latest album, I’ll Make The Most Of My Sins, supported the Pretenders at the Royal Albert Hall and is now gearing up for a summer of festival appearances including at the Great Escape today (Thursday 18 May). We quizzed him on his songwriting past, present and what the future has in store…

Music always seemed to impact me in one way or another as a kid. My dad is a huge music fan and that's where the blues and country influences come from.

I bought my first singles very young, the John Williams score to E.T. followed by Uptown Girl by Billy Joel, both of which I can still remember vividly enjoying, until my brother smashed Billy Joel on the side of the turntable as I was playing it too much.

Pink Floyd and Roger Waters probably the most. But I can now start to trace a lot of my first experiences of music and pick out bits that inspired me unconsciously at the time, especially country artists.

Have you got a particular place or space where you find yourself at your most creative?

I tend to find I snapshot moments wherever I can and then work on them whenever I can. I do sit in the kitchen a lot and strum, I'd say a lot of songs come out of those moments. Usually songs come quick and never when I think they will.

I’ll Make The Most Of My Sins is your new record - what was the aim with the album?

The album is a mixture of new and old songs I had that I felt had a thread and I wanted to extend that.

We firstly set about recording with a whole different bunch of tunes but that didn't work. The songs I had weren't really saying anything to me or what I felt was going on in the world around me. But then these tunes came together as I started working towards the theme I had in the album title.

I tend to come back to the big questions in life about who we are, and what we're doing here. When the title track came along I knew I had to make the album about that sentiment within that song. So the album dips in and out of a narrative about personal sin and the same theme on a bigger scale.

You went over to Nashville in 2016 to the Americana Fest - could you explain a little about your experiences over there?

Nashville is very open community of musicians, so you feel instantly at home and the Americana Fest is a really great way to meet other people who you can instantly start to build new networks with. I met so many people who have already made a difference to what I'm doing now and vice versa. I met and secured a record deal for the new album while there with Last Chance Records. I was also named in the 20 best things Rolling Stone saw over the week, and described as 'Best Brit'. I was involved in official showcases over the week and generally filled every minute with trying to better my musical life. Which it definitely has.

What are your thoughts on the current health of the Americana and country music scenes in the UK?

I set out 10 years ago to put together an alt-country band as it was then, but there didn't seem to be much of a scene, certainly not in Liverpool anyway.

But now, everyone has embraced it and it's great. I love traveling the country and playing the Americana nights for all of those like-minded fans who have now become promoters. They had to take on these roles in order to be able to watch the type of music they believed in and through that scene has grown. It's been such an organic growth that it's now here to stay and it will continue to. I think it is definitely the strongest growing music genre for me right now here in the UK. The difference in numbers and interest between the Americana Festival in 2016 and 2017 was stunning.

I think the real challenge is making sure is doesn't become a trend. That the people involved are in it for the right reasons and not using it to piggy back their own careers. I don't think that will happen though, because it’s such a tight community.

The opportunities come from sharing more of our artists with the US and continuing to receive the volume of great US acts that we do. Some of the American artists that come here see it as a really strong market for them. That can only be a good thing.

It looks good, the album is being really well received and gigs and festivals are starting to come in. There seems to be more good news than bad and I'm starting to think about recording very soon. That may involve another of my musical heroes helping me on the next record, but that's still to be put in stone. Hopefully it happens. I'll keep you posted.

Robert will be playing at The Great Escape today (Thursday 18 May) at the Proper/Redeye Showcase at The Blue Man at 2.40pm.

Visit his website to find out where else you’ll be able to see him on tour.